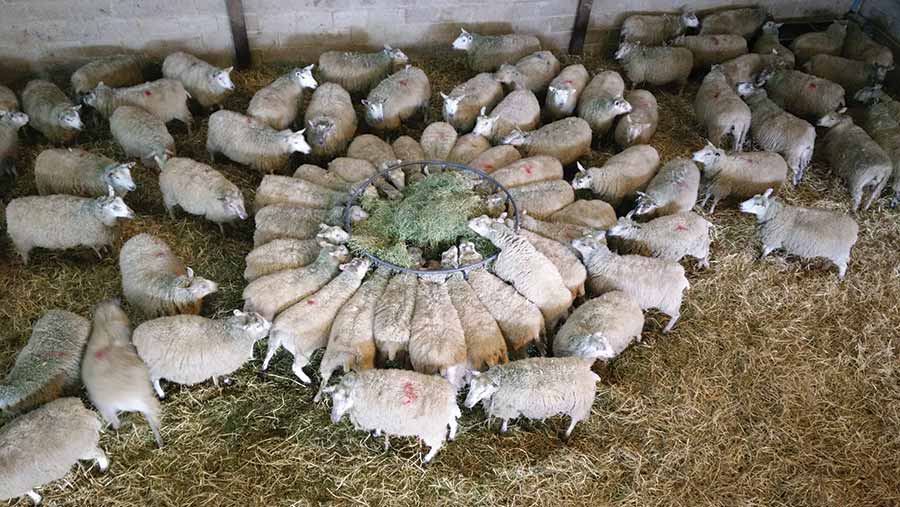 Opting to feed lucerne at lambing is helping cut feed costs and reduce the stress of running an early-lambing flock for one Buckinghamshire farmer.

For the first time this year, he sustained twin-bearing Aberfield ewes with lucerne, offering a grass hay ration to ewes with singles.

“I’d never realised that a sheep bleats before she lambs,” says Mr Pearce, who runs 700 sheep on 90ha of heavier land alongside his 930ha arable enterprise.

“I’d never heard it before as my lambing shed was always so noisy. Even though I’d changed the shed and the light wasn’t brilliant I was able to shepherd them with my ears – it was a real revelation.”

Listening out for bleating, Mr Pearce and staff can anticipate complicated pregnancies and make early interventions if required.

Lucerne is fed in a ring feeder to twin-bearing ewes and doused in molasses to ensure sufficient ME levels.

“I was trying to mix it with 11.5-12 ME haylage to give them the energy balance but I gave up with that because they only want to eat the lucerne,” adds Mr Pearce. “I got around the problem of energy by adding the molasses.

“When the sheep eat it, they eat the whole thing. When they pull at the stalks, bits of leaves fall off into the round feeder and they climb on top of each other to get at those leaves.”

Lucerne is grown by neighbours George and Dominic Uhart, Apsley Manor Farm, and delivered in Heston-sized bales. Feed costs have shrunk from £220/t for 18t of concentrated nuts fed to the old Suffolk flock to £150/t for 17t of lucerne hay.

Sheep eat the lucerne for a period of 60 days, starting two weeks prior to lambing, through lambing and then three weeks outside, when the dryness and scratch or the hay complements succulent spring grass growth.

“They use it as much as a binding agent but of course they are taking on a huge amount of protein at the same time,” explains Mr Pearce.

Both establishing lucerne as a crop and then subsequently harvesting lucerne as hay are very challenging, says George Uhart who has been growing the crop for five years on some of his drier land.

Biomass-fired hay dryers and as a watchful eye on the forecast are necessary to keep control over baling times, reducing the amount of leaf drop and maintaining the crop’s green colour.

“Without the dryers making lucerne hay is pretty much impossible in this country,” explains Mr Uhart, who hopes to end with a 10% moisture level.

“You take three or four cuts a year and you might be lucky getting one cut that you can make with the English weather.

“Every cut pretty much goes in the hay dryer to retain the leaves which is where the protein is.”

Supplying a wide range of customers, including zoos and dairy units, the Uharts can produce to a baseline level of 18% protein, with some samples analysing at 22-23%.

However, by running smaller sheep at higher stocking rates, the Moat Farm flock has maintained productivity without striving for high lambing percentages. This year the Aberfields lambed at about 130%, with Mr Pearce looking to lamb at 150% in 2016.

“The reason for going into a forage-based system to begin with was high amounts of pregnancy toxaemia in the bigger ewes I was farming and I had gone to a smaller breed of sheep, the Aberfield, to get around this,” explains Mr Pearce, who in the past was averaging 190% lambs from his Suffolks.

“When you get to that sort of level you are talking about 30% of them having trebles and with a big Suffolk ewe we were struggling to get enough calories into them,” he adds.

“In the last two weeks of pregnancy they are mobilising lipids and the chance of getting pregnancy toxaemia is massive.”