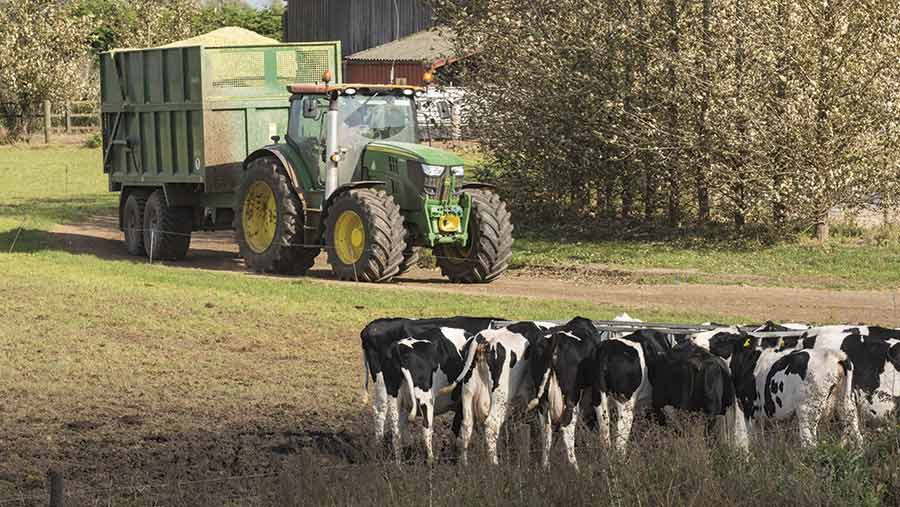 The UK maize growing area has increased by 14% in five years as the crop continues to gain popularity among livestock producers, a survey suggests.

The survey of 340 farmers was carried out by the Maize Growers Association, British Grassland Society and Grainseed.

That consolidation is reflected in the expansion in maize growing area on individual farms, which has grown by 37%.

Despite the scaling up in herds it has not been matched by a move to year-round housing with four out of five farms still making use of grazing.

“It’s encouraging that despite the size increase, about 80% of herds still have access to grazing with much of the maize growth coming from complementary and buffer feeding while cows are at grass.

“In fact, while 28% of respondents say they have increased the amount of maize fed compared with five years ago, 75% say they use maize all year as a winter and summer buffer feed,” Mr Pickard says.

The survey picked up that there was a fundamental change in the reason why farmers grew maize.

But the most important advantage identified by growers in 2016 was reliability of forage stocks.

The change was driven in part by a run of poor weather for grass production.

“We’ve had some bad years for grass and silaging with cold and wet summers. And, yet maize production has been relatively stable with good yields, digestibility and energy,” saysMr Pickard.

“So ensuring growers have enough forage to get them through the year has overtaken milk yield in terms of the main reason why people grow maize,” he adds.

Reliability of forage production topped the growers list with 62% of people in the survey saying it was the single biggest reason why they now grew maize.

Mr Pickard says this was in part due to better varieties, understanding of the crop and overall management levels.

More than nine out of 10 growers (94%) said they now used a professional agronomist.

Few reported significant pest problems, although of the 6% that did, said wireworms, leatherjackets and slugs were the main concern.

A similar number of growers routinely use a fungicide for controlling eyespot but the disease is not seen as a big issue, Mr Pickard says.

By far the biggest pest problem was weeds with 74% responding they had problems.

Half said nightshade caused difficulties, a third had issues with fat hen and 25% said they struggled to combat couch or meadow grass.

At harvest one third of growers said they went in at 30% dry matter but only 15% said they routinely sampled for this before cutting. About 57% said they still judged this by eye.

“The chop lengths are a little shorter than expected, but probably reflect the dual use of maize for ruminants and AD.”

When it comes to feeding, the average proportion of maize in the forage rations averaged 51% although 19% fed maize at over 70% inclusion and 11% fed maize as their sole forage source.

Grass and cereals remained the most important additional feeds.

More than nine out of 10 ( 93%) of livestock producers said grass was fed alongside maize, 56% said cereals and 50% said a proprietary blend.