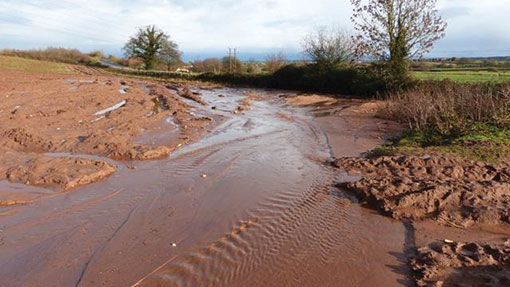 Julian Hurford was one of the first farmers in East Devon’s Coly Valley to start growing maize in 1989 – and he has now become the first to give it up.

Initially attracted by promises of higher milk yields and low-cost production, he grew and fed it very successfully.

But more recently, soaring costs and increasing problems with soil compaction and water run-off in the area have led Mr Hurford to radically rethink his system.

“I like growing maize, but when I started, sprays were cheap and grass silage quality inconsistent. Over the years grass silage techniques have come a long way, spray prices have soared and the cost of soya in the diet has become prohibitive.”

So, in 2007, Mr Hurford started to cut his maize acreage back, and in 2012 he dropped it altogether.

Previously, the ration comprised 20% grass silage and 80% maize silage on a dry matter basis, balanced with soya and oilseed rape to boost protein.

Milk yields were close to 8,000 litres a cow, based on more than 2.5t of concentrates. So how has that changed?

“The cows prefer eating grass silage and although milk yields have declined by 700-800 litres, that’s partly because we have gone slightly more extensive and cut concentrate levels by more than 1t/cow.” 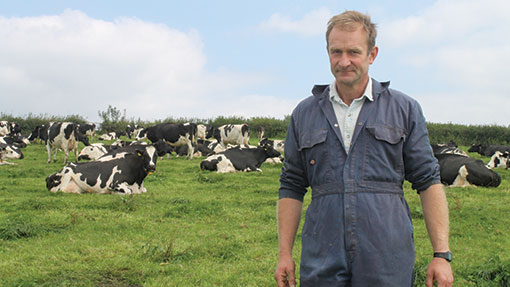 The effect on soil structure across the farm has also been marked. In 2005, analysis by Richard Smith, land quality officer at the Environment Agency, revealed that 44% of the soils had poor structure, resulting in enhanced surface run-off, with 75% in need of subsoiling.

By 2014, none of the land had compaction-related run-off, and only 20% required subsoiling, with a noticeable increase in worm populations.

“We’re not perfect – we do poach the soil in wet times, but it is much more resilient, and bounces back more quickly,” says Mr Hurford.

The farm gets 935mm of rain a year – mostly during the autumn and winter – and features a number of steep slopes. The sandy and silty topsoils are inherently unstable, with mainly red marl clay underneath, making for slow drainage.

“The periods when the land can be worked without damaging soil structure are very limited between early October and April,” says Mr Hurford. Despite choosing early maize varieties, harvest was usually in early October, with wheat or grass seed drilled afterwards.

“One year we couldn’t get any winter ground cover in at all – and where we did reseed grass in imperfect conditions, the cows didn’t like grazing it for a good four years afterwards.”

Soil erosion was also noticeable, with run-off from maize fields causing gullies, silting up of drainage ditches and muddy floods across roads.

“For a few years, we used a Shakaerator and subsoiler to relieve compaction, with good results – particularly in wholecrop cereals,” he says. “We’d been using minimum tillage for 17 years and, after subsoiling, yields jumped by more than 25%.”

Since changing to a more grass-based system, he has enjoyed much greater flexibility.

“I hate being restricted. Now, if I want to reseed a field I can do it any time between April and September. I don’t need to rush to sow maize in the spring when first-cut silage is looming, and chase to get cereals drilled before December – it’s all so much easier.”

Mr Hurford grazes the cows on a 12-hour rotational basis, using a plate meter to measure grass growth, and grazes all the silage leys in the spring to improve silage quality.

“We take two to three cuts and use a tedder to improve wilting as well as a silage additive to preserve the quality.”

“Based on dry matter yields, we can get 5.5t/acre of grass silage and the same from maize – plus we have the winter grazing,” says Mr Hurford.

“Butterfat has increased from 3.9% to 4.07%, and cow health is better, too, with the number of displaced abomasums dropping from two or three a year to none.”

“We’ve got noticeably less soil run-off, and although milk yields have fallen slightly, efficiency has improved. The whole operation is a lot more robust.”