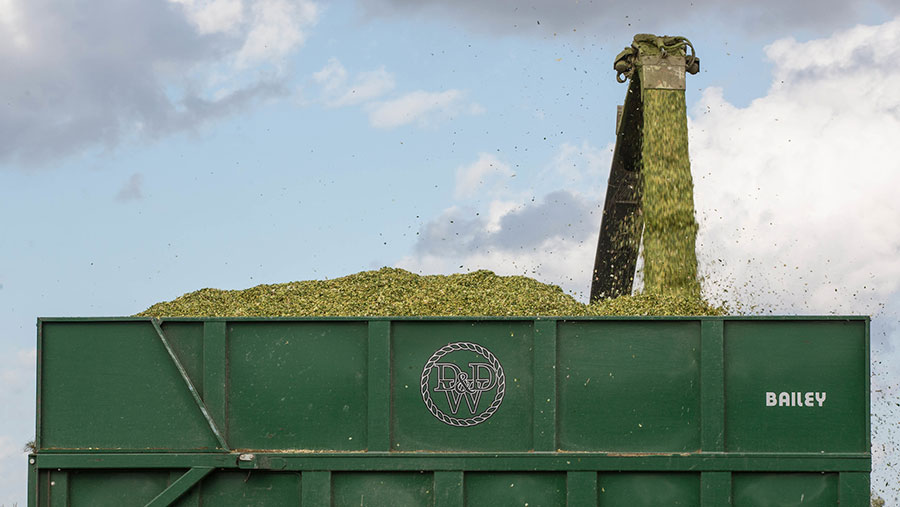 With maize ready in many areas now growers need to plan clamping carefully to maximise the performance of silage next winter, according to Neil Groom, technical director for Grainseed.

“Maize is now ready on some of the more fertile and stronger soils in many parts of the country and yields are very good.

“It’s important to consolidate the maize well to remove oxygen and improve fermentation.”

According to the Maize Gowers Association’s rule of thumb, the buckrake weight should be 25% of the clamping rate per hour.

So, if you harvest 100t/hour you need 25t of tractor weight rolling the clamp – this would be equivalent to two tractors.

Rain before sampling for Farmers Weekly has resulted is slower dry matter increases this week, believes Mr Groom, but the grains are getting harder as sugars in the leaf are converted to starch in the grains.

Both Toby Tibbenham in Norfolk and Chris Blake in Devon intend to harvest this week if the weather improves.

“We have some maize on heavy land that has to come back through the village, so we’ll chop slightly green if the weather window is there,” says Mr Blake, who adds he would rather this than risk leaving the crop out and the weather closing in again.

Most of our maize is rotated around wheat and as soon as the maize is off the wheat will be drilled so we have a crop growing in the field and to ensure the wheat is well established before winter.

Tips to improve fermentation and reduce mud on roads