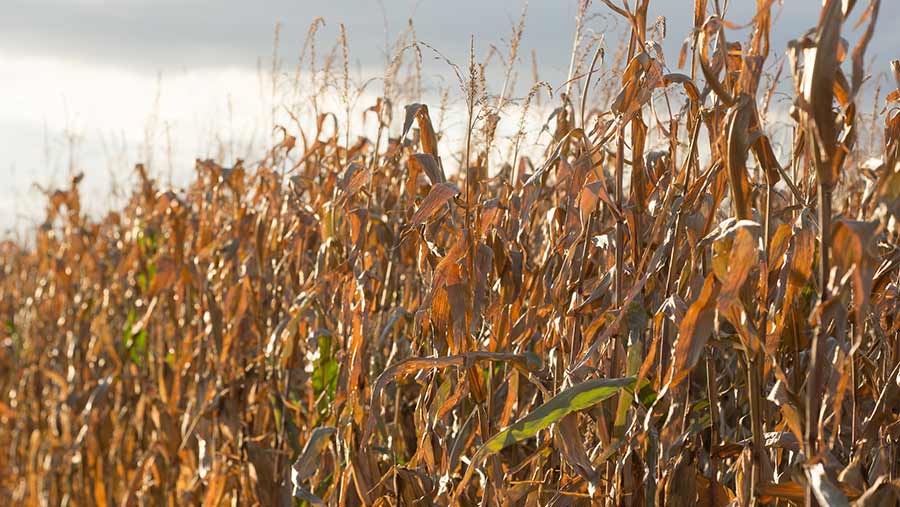 “In most areas of the UK maize will be harvested in September, and with soils still warm there is the opportunity to establish grass or grazing rye to provide an early bite next spring,” Mr Groom says.

“All maize stubbles should be cultivated to reduce the risk of soil erosion over winter and if you are not drilling winter cereals then a winter cover crop should be established to utilise any residual nutrients over winter.”

See also: Attention will be needed to minimise losses at clamping

Under the ELS scheme winter cover crops need to be drilled by 1 October. These need to be a mix of cereal and non-cereal from an approved list of species.

Mr Groom recommends a mixture of rye and vetch as an ideal forage that could be grazed early next year.

Mr Groom says he prefers to graze in the spring rather than making silage if the field is going to be drilled with maize again, otherwise there is a tendency to let the rye or grass bulk up for a big cut of silage.

“This is what Chris Blake is doing in Devon. Chris samples for Farmers Weekly and plans to harvest his maize on 12 September. We will then rip through the stubbles with a tine and broadcast a mix of Italian ryegrass and Westerwolds for grazing next February with the heifers,” he says.

“Like most growers, we have some fields that are shorter than normal due to the lack of rainfall, but all plants have a decent cob and so we expect our maize silage quality to be very good. We will have to adjust our winter ration to account for the higher starch content this year and I will be sampling at least once a month throughout the winter and adjusting the ration accordingly.”

On some East Anglian farms, there have been crops harvested with a very high dry matter due to dead leaves caused by the drought and small cobs with less grain.

Rather than filling the clamp in a wedge, Mr Groom advises filling the whole of the length of the clamp and layering dry fields with greener fields to help fermentation and to mix the forages better for feedout.

Applying an additive to these crops may also reduce the effect of any yeasts and moulds which have colonised the dead leaf.