Protein-rich red clover is allowing a Welsh beef farm to finish cattle at pasture with no supplements. Debbie James finds out more.

Mr and Mrs Egerton run a low-cost single-suckler system at Treveddw Farm, near Abergavenny, targeting finishing weights of 343kg in 18-month-old steers and 320kg in heifers. 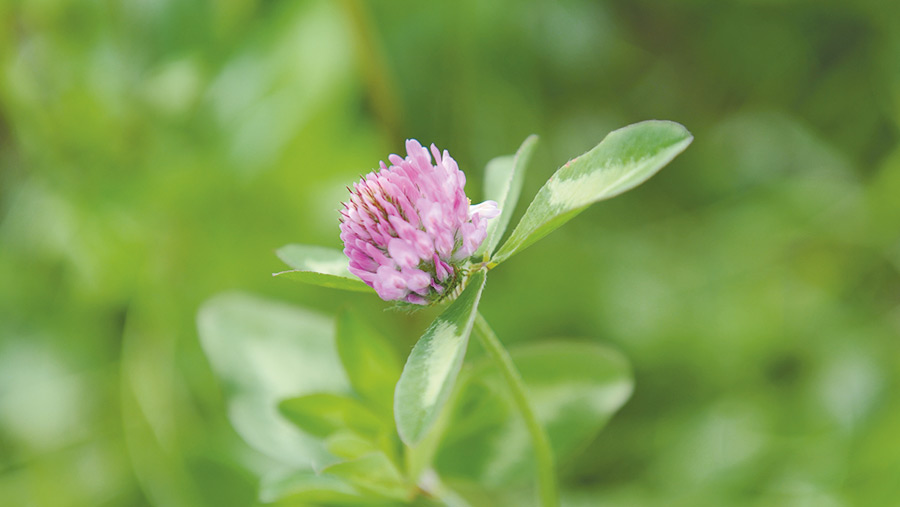 The Egertons first grew red clover in 2006 to produce silage as a protein source for weaned calves.

“The power of the red clover silage builds frame and growth over the winter so the animals are of a size to motor on in the second summer,’’ says Mr Egerton. “From a yield and quality point of view, red clover performs exceptionally well.”

At Treveddw Farm, the first crop of red clover silage is cut and baled in mid-May and the second crop six or seven weeks later, yielding between 25-32 bales/ha.

“It is a balance between cutting the red clover at its optimum, when it is just coming into flower, and when the ryegrass is coming into head. We try to get the heading date to match the clover,” says Mr Egerton.

“We chop it at three inches because it helps to consolidate the bale and speeds up fermentation.” 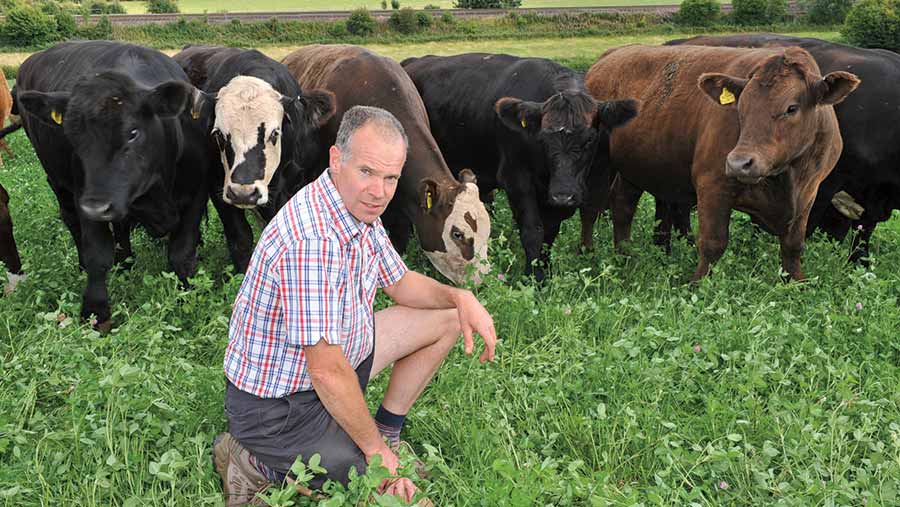 He doesn’t take a third cut because he wants the ley back in the fattening rotation. “If it were cut, it would be too late coming back into the rotation.

Also, you can be down to three bales an acre (8/ha) although the quality can be fantastic because the red clover is dominant.’’

The biggest challenge is conserving that protein. Mr Egerton suggests it is false economy not to use an additive.

“Additive is vital. If you don’t use it you can easily lose 4-5% protein and end up with levels no higher than ryegrass.

“We wilt it for 24 hours, but however hard you try it is going to be fairly damp at baling and can take five to seven days to stabilise, during which time the protein can disappear.

“We always use an additive because if we have gone to the trouble of making something good we might as well look after it.”

The silage’s metabolisable energy (ME) is typically around 11 MJ/kg DM, so the Egertons combine it with pea and barley wholecrop to provide energy and fibre.

Feeding at housing and grass

Calves are housed with their dam in November and are weaned at 10 months. At this point calves are fed red clover silage ad lib in troughs, with up to 10kg of homegrown pea and barley wholecrop sprinkled on the top.

The benchmark weaning weight is 300kg; anything under 300kg is separated and supplemented with a 16% crude protein concentrate until it comes into line with the mainstream weaned calves.

Turnout is at the end of March with the steers and heifers split into two groups. Both groups are rotationally grazed on ryegrass and white clover leys until the beginning of August, when the steers graze the red clover. 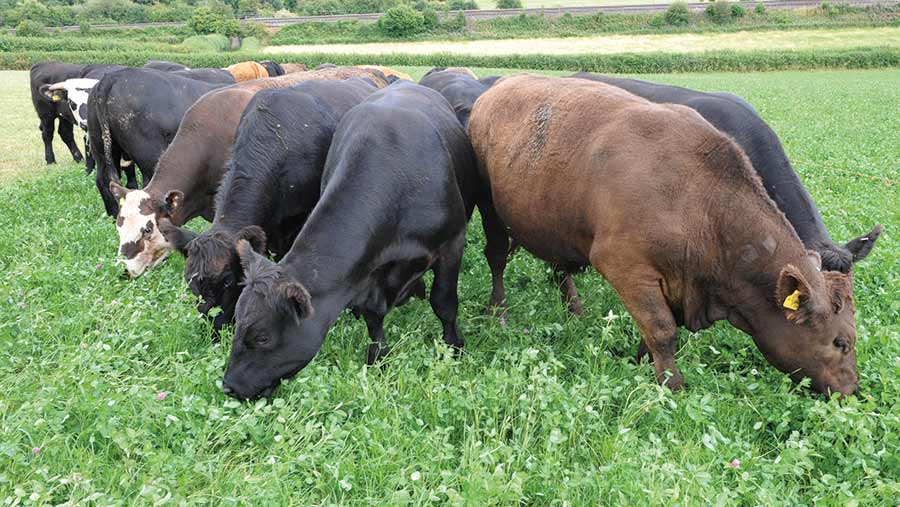 “The heifers don’t need such a high-powered diet so they don’t go on to the red clover until the beginning of October. We finish the steers first, then the heifers,” Mr Egerton explains.

Progeny are weighed frequently: in July, at November weaning, at March turnout and every six weeks thereafter, through to slaughter. Steers are achieving average daily liveweight gains of 1.1kg.

The Egertons run a rotational grazing system, which has increased forage availability by 40%. “The cattle get fresh feeds daily, everything is behind an electric fence,” Mr Egerton explains.

In total the 6ha of red clover is stocked with 32 steers.

Mr Egerton says red clover stands up well to rotational grazing but if conditions are wet it can be damaged. “If it isn’t managed properly you can kill it in a wet spring because it has a very fragile crown.”

In contrast, red clover performs well in dry conditions, which makes it a good match for Treveddw Farm, which has less than 40in of rain a year, a south-east facing aspect and silt loam soils. “It has a good tap root, it will find moisture even in the driest conditions,” says Mr Egerton.

Deep roots mean it can also access nutrients deep in the ground, negating the need for large applications of nutrients. Mr Egerton applies 10 tonnes of composted manure in September and tops this up with a CAN + S nitrogen with an equal amount of phosphate and potash.

At Treveddw Farm, a small dressing is applied before first-cut silage. “Because we are not organic we do find it pays to apply 50 units of nitrogen an acre (124 units/ha) in the spring to bolster the first cut,” says Mr Egerton.

Mr Egerton says the cattle are not just growing on the red clover ley, they are finishing on it and this is avoiding a costly second housing during the winter. “A number of systems house and finish on red clover silage, but our approach is to get everything away before they get straw under them.’’

Grassland specialist Charlie Morgan recommends including companion grasses with red clover – between 1.5-2kg of red clover in a 12-14kg grass mix. “The crude protein of red clover can be 20-23%, so you need fibre and ME to help retain that protein in the rumen for longer.”

A red clover seed mix costs about £135/ha and the establishment is the same compared with a standard grass mix.

It needs three months of frost-free weather to establish well, so Mr Morgan recommends planting from mid-July to the end of August. “The other alternative is spring sowing with a cover of cereals. This nurses the crop and gives extra value in the form of arable silage.”

Mr Morgan regards red clover as a superior protein crop to lucerne because its protein is protected by polyphenol oxidase. “This makes the silage blacker in appearance and is an indicator of better protein and less is lost through fermentation.”

Under research conditions, red clover can last for five years, but Mr Morgan suggests four years is a more realistic outcome. “Red clover leys are consistently out-yielding the standard mixtures, making them more cost effective through having both yield and quality,” he says.

He says it is also economical to grow, explaining that red clover continually fixes nitrogen and releases it when it is grazed and cut.

“It depends on the previous crop but, apart from some nitrogen for establishment, it might not need any at all. However, some nitrogen to aid grass performance is more economical than using purchased feeds.”