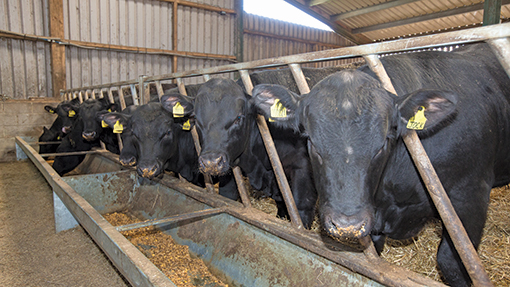 Beef farmers are being advised to feed cereals while they can and save silage for next year as the price of bought-in cereals is the closest to silage production it has ever been.

Cereal prices have fallen over the past year, getting close to the £80/t of dry matter price tag for producing grass silage.

Don’t be afraid to feed concentrates and get cattle away sooner – it will use less total feed, says ruminant nutritionist Pete Kelly from Kelly Farm Consulting.

The variable quality of this year’s first- and second-grass cuts may mean farmers will be disappointed when they open up the clamps and start feeding, he adds.

While a month ago there were concerns about the quality of maize silage, these worries have so far proven unfounded, with starch levels of 30%. The crop, though tall, does not appear to have diluted the starch content. The fibre element is high but the crops were cut green and dry, says Mr Kelly.

Speaking at Eblex’s first teleconference for farmers, Mr Kelly stressed the importance of getting silage analysed in order to balance supplementary feeds.

Fibre is high in grass silage, but low in maize silage this year so Mr Kelly advises avoiding high-fibre supplements such as brewers’ grains, beet pulp or soya hulls if feeding grass silage.

Cereals are a cheap source of energy and low in fibre, but farmers must consider the processing costs, he adds.

“In the South West, wheat is at £100/t, oats are a bit less and barley is at £95/t. Buy in straights and get them processed on the farm, but shop around for the best mobile miller,” says Mr Kelly.

Oats don’t even necessarily need milling, as he explains: “Cattle up to 250kg liveweight can digest them whole. There is a small amount of wastage but processing costs could take prices from £17/t up to £20/t so farmers can afford to lose 15% and still breakeven – mobile mix companies can be expensive.”

When processing cereals the grains only need cracking as overmilling can result in acidosis. The best way to “take the edge off acidity” in diets is to add 100g a head of limestone flour, says Mr Kelly.

With very low-quality silage, other protein may be needed, otherwise it shouldn’t really an issue this winter, he adds, so long as rations are over 12% protein for finishing cattle and 15% for growers.


If you can buy any feed in this table for less than the breakeven value you are saving money compared with using a mix of wheat and rape at £120/t and £180/t, respectively.