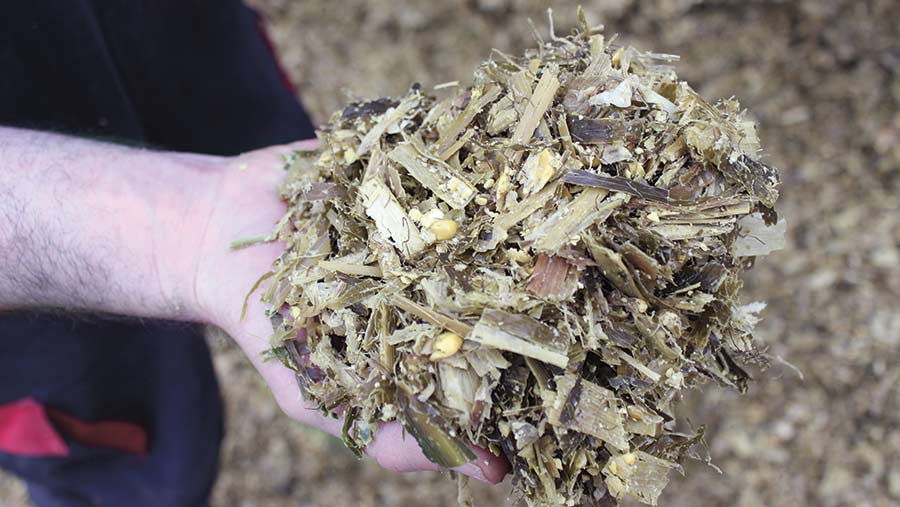 Following the introduction of shredlage maize into the diet, the Coombes family have been able to remove straw from the ration, reduce the level of C16 and maintain production.

Shredlage is a relatively new concept on British shores.

Compared to conventional forage maize, shredlage is cut longer at harvest and then ‘shredded’ through a special processor fitted in the forager (see box at end of article).

This results in a light, fluffy mix, which includes a more evenly distributed and processed maize corn.

Improved maize fibre digestion in the rumen as a result of the shredding process was one of the reasons the Coombes decided to shredlage process their crop last year.

This would enable them to remove 0.5kg a head a day of straw from the diet. Barry Coombes says this was attractive due to the cost and challenges of sourcing straw, along with its low nutritional value.

“There’s nothing in straw feed value wise. If you take that out, they will eat 1-2kg more fresh mix, which will produce milk,” he explains.

Since shredlage was introduced at the start of January, the level of C16 in the ration has been dropped from 0.4kg to 0.3kg/head. 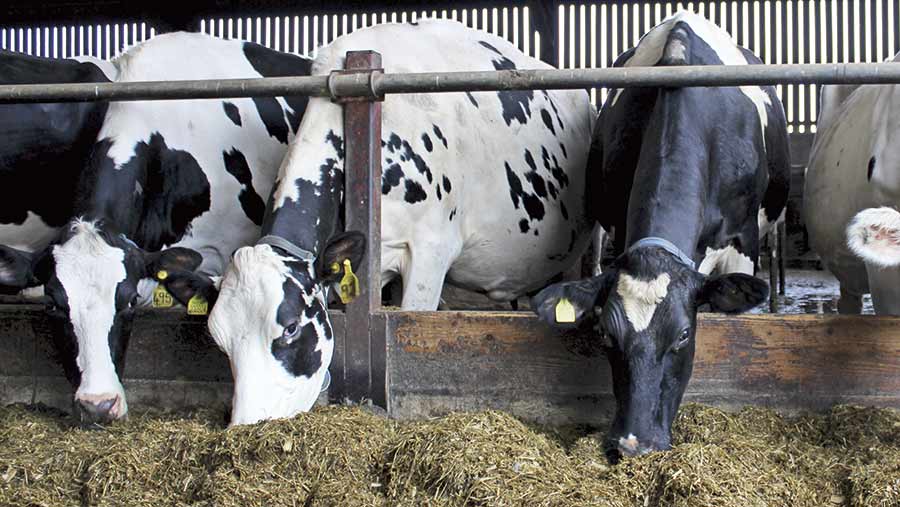 Since introducing shredlage, maize straw has been taken out of the ration at New Grove Farm © Aly Balsom

Straw was initially introduced to help boost butterfats in the 220 cow herd, which is milked three times daily and yields 12,600 litres at a current 3.91% fat and 3.11% protein.

The theory is that improved fibre digestion in shredlage will help maintain milk fats, whilst feeding less of the expensive C16.

Other changes were made to the ration before feeding shredlage, which will have impacted the herd overall, but Mr Coombes is convinced the shredlage is playing a key role.

‘Best of both worlds’

Cornish farmer Paul George is also convinced by the concept of shredlage maize, however, having only just started feeding the crop this year, he says it’s too soon to make any firm conclusions. That said, he is keen to repeat the process this coming season.

He explains: “It just makes sense… It’s just got so much physical structure with good available starch. It’s the best of both worlds.”

Better starch availability in particular has enabled Mr George to reduce the level of wheat in the diet, which has brought a “positive saving”.

Most notably it has freed up space in the ration to feed more protein and NIS, which has helped yields and butterfats.

“We’re doing 4% fat and just over 39 litres a cow at the moment. My cows have never done that yield at that fat level,” says Mr George, who runs 300 cows, yielding 12,100 litres at Nansmerrow Farm, Tresillian.

The fact the maize “grains are smashed to pieces” and evenly distributed also means the silage is more consistent.

On average it’s analysing at 35-40% dry matter, 35% starch and 12.3ME, with predominantly early maturing varieties grown.

Both the Coombes and Mr George recognise that last year was a good growing season. However, the characteristics of the shredlage, together with the benefits seen on farm, mean they have both signed up to repeat the process this year.

Barry says the benefits make up for the additional costs to him of about £4-5/acre over conventional forage harvesting, using their contractors.

Ultimately, he believes the processing helps make more from the same crop.

He explains: “It’s the same product, but you’re processing it differently to get more out of it, which is a no-brainer as maize is such an expensive crop to grow.”

What effect does it have on the diet?