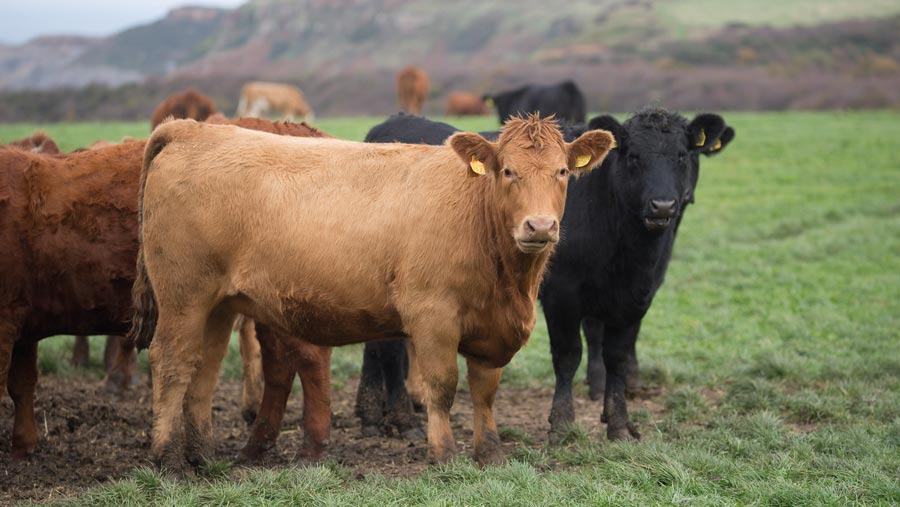 A Yorkshire suckler herd is sending more animals to slaughter in specification, has lifted calf output and improved grassland production.

These three gains have been made by the Prudom family at Northfields Farm near Whitby since taking part in the AHDB Strategic Farm programme.

The Prudoms aim to increase technical performance and grow cow numbers from 200- to 260-head for the same fixed costs with half a labour unit plus family labour.

They want to farm their beef cows as productively as possible on the poorer land alongside their arable operation.

Farmers Weekly caught up with Guy Prudom and consultant Ian Cairns of Agrifood Technical Services and the 5-Agri Group to find out what has worked well and what’s next to improve on.

The farm finishes homegrown progeny on a ration of 8kg of crimped homegrown grain, 14kg of silage, 10kg of wholecrop beans and minerals.

The Prudoms previously struggled to hit processor specification and were penalised for overfat cattle.

Cattle were being kept at grass too long, which meant that they were being finished in the spring at 22-27 months old, when the national glut of cattle typically depresses prices.

Selling at this time meant processors weren’t taking them on time and cattle were backing up, getting overfat and overweight.

However, a few changes have propelled the farm from number 40 in Dovecote’s list of suppliers to one of the top five farms hitting specification, getting 70% away in specification, of which 12% hitting bonuses within their group.

Calf vigour and mortality were flagged as an area of improvement to lift the number of calves weaned, which has moved closer to the 90% target.

This has been addressed by feeding a quality protein source alongside the silage, straw and mineral ration the farm has always fed in the last month of gestation.

The Prudoms treat far fewer calves in the first month of life. Pneumonia, naval ill and joint ill treatments have dropped from 15% to 2%.

Most cows are fed a total mixed ration (TMR) from a Keenan, starting with 8kg of straw and 14kg of silage freshweight from housing in November to early February.

At their third unit, the cows are fed silage behind an electric fence at the clamp face, so protein is supplied in liquid form. This is the first year this has been attempted and calf vigour is much improved.

Protein is increased for one month before calving starts in early February, starting at 0.25kg of a hi-pro soya meal and increased to 1kg a head a day. Straw is decreased proportionately to 4kg and silage is built up to appetite at around 20kg a head a day.

He believes this is partly because the rumen bugs are fed a good protein source, which leads to improved rumen function.

Back in 2018, the Prudoms’ key aim was to grow more grass by rotating cattle on smaller paddocks to shorten the winter and cut feed costs.

A pilot paddock-grazing system was trialled in 2018 with a bulling group of 50 cows and another mob was paddock-grazed in 2019.

Previously, the cattle were grazed in bulling groups but on longer weekly or fortnightly shifts. A lot of the fields were 8ha (20 acres) which were divided into four 2ha (5 acre) paddocks.

Cattle are on two-to-three day shifts on 11 paddocks, with big bale silage taken on paddocks as grass growth edges away.

This has increased grass growth by 3t dry matter (DM)/ha/year at the same fertiliser rates and has extended the grazing season by four weeks at each end.

Another 24ha is going to be put into paddocks this year. This is already in 2ha (5 acre) fields, but water infrastructure will be the biggest issue.

“I’ve nearly doubled my grass growth; I was at 6-7t DM/ha and now we’re growing 12t DM easily in some fields.”

*The suckler enterprise is benchmarked on cost (by AHDB Farmbench) by selling weaned calves into the growing/finishing enterprise.