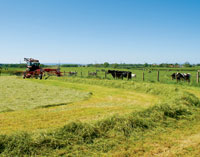 Re-seeding is vital to the silage success of this year’s All Wales Silage Competition. Debbie James reports

An annual reseeding programme is an important factor in producing high quality silage, according to a second-time winner of a national silage competition.

Darren Callan grows 40 hectares of spring wheat, re-seeding this land with grass seed in the autumn. “It is impossible to get the best quality silage from low quality grass, I don’t think you can afford to skimp on re-seeding costs,” he insists.

Mr Callan re-seeds with late heading diploid varieties and uses little tetraploids because he feels these leave the pastures open, allowing weeds to establish. The first 100 acres were reseeded in autumn 2009.

He has been a manager for Frederick Hiam Ltd since 1996, firstly at Corston Farm, Pembrokeshire, and also at Lower Broadmoor Farm, Talbenny, since September 2008.

He is believed to be the first farmer to win the Federation of Welsh Grassland Societies’ All-Wales Silage Competition twice on two different farms.

Mr Callan, a member of the Cleddau Grassland Society, believes overall attention to detail is important when it comes to making quality silage for the autumn-calving herd. A well thought-out fertiliser policy, harvesting first cut in the first week of May and good ensiling techniques are essential, he says. “I also have to give credit to the contractors who cut when we want them to cut and to the farm staff who put in the effort to get the results. It all comes down to teamwork,” he says.

Silage is an important part of the diet of the high yielding, Holstein Friesian herd. Only 40% of the 420-head herd is turned out to grass because Mr Callan says yields and fertility are better when the higher yielders are housed. “We find the higher yielders easier to manage indoors, we have more control over intakes,” he says.

He follows every rule to get the optimum feed value and aerobic stability from the silage.

Regular soil testing ensures sufficient levels of Ps and Ks. A quarter of the farm is tested annually, usually in the autumn. “The silage ground gets all its Ps and Ks from slurry,” says Mr Callan. “We apply up to 6500 gallons an acre across the silage ground. We don’t put any slurry on the grazing pastures because the cows put the Ps and Ks back on this land naturally.”

Fifty per cent of slurry is applied between mid-January and mid-February and 25% after both first and second cuts. The first dressing of nitrogen is applied at the end of February and topped up for first cut four weeks later at 100kg/ha.

Nitrogen is applied immediately after cutting – at a rate of 90kg/ha.There are three cuts of silage – 350 acres of first cut, 225 acres of second cut and a third cut of 150 acres.

The mower height is set at 6-7cm to allow a quicker re-growth. The crop is usually mown in the afternoon and tedded out within two hours of cutting. The grass is left to wilt for 36-48 hours.

The clamp is rolled continually to remove the air which causes mould growth and covered with a new sheet every night to prevent the silage from building up butyric acid.

John Evans, who judged the All Wales Silage Competition, says he has never before scored a farmer full marks for the standard of pit management. “I awarded 12 out of 12 because the pit was faultless. I don’t recall ever seeing a silage clamp with absolutely no waste on the side, shoulders or the top,” says Mr Evans. “The face was even and the silage perfectly preserved.”

Mr Callan uses a silage additive to maintain consistency of pH and lactic acid levels so that more valuable energy can be kept as sugar.

He admits his interest is in maximising milk from forage and acknowledges the system could allow for greater efficiencies given the acreage of the farm. “Perhaps we should be challenging the cows more but the system we have seems to work and I wouldn’t want to sacrifice yields by altering it,” he says.

It had an intake potential of 108 and, together with 100 acres of wholecrop, is the foundation for annual milk sales of 9,750 litres per cow.

The herd is fed a ration of 15kg first cut silage, 10kg second cut silage, 8kg wholecrop, 0.5kg straw, 5.5kg concentrate blend, 2kg rolled wheat, minerals and an energiser product. This supplies maintenance plus 30 litres. The cows are topped up in the parlour with 18% HDF at a rate of 0.4kg a litre above 30 litres, to a maximum of 6kg a head.