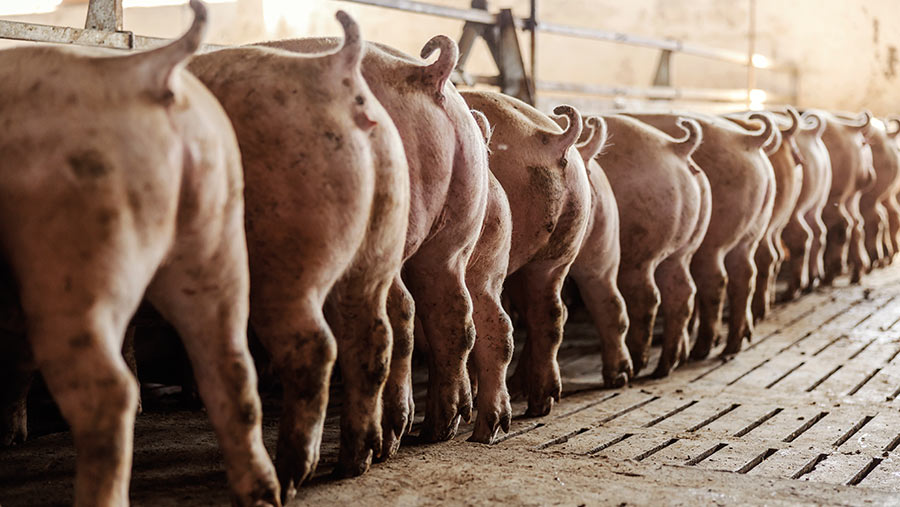 A more frugal approach to third-stage finishing diets has been a potential cost-saver for pig farmers desperately trying to minimise losses this year.

Adjustments have tended to be small and focused on vitamin levels, particularly phosphorus and amino acid levels, from about 90kg liveweight.

Independent pig nutritionist Andrew Zarkos-Smith stresses that any other changes to energy, protein and dry matter – the basic drivers – are only going to result in false economies.

“In terms of energy density and the basics of feeding pigs, there’s not a lot of cutting down that you can do, and if you do start cutting down then it will affect feed conversion rate,” says Mr Zarkos-Smith.

“Diets with lower energy density will just mean a cheaper cost per kilo, but more kilos needed. We don’t need to review the fundamentals of pig nutrition.”

He says a Dutch three-stage system is particularly useful on systems sending pigs to slaughter at bacon weights (120-125kg liveweight).

Many farms are seeing the benefits of using phytase instead of monocalcium phosphate.

“The enzyme phytase splits the calcium and phosphorus off the cereal and makes it more available to the pig. It’s a sensible route to go down to minimise the additional phosphorus you need to put into diets.”

Mr Zarkos-Smith says some lessons can be learned from countries that are very “tight” with nutrition late in the production cycle, providing it is practical for a third finisher diet to be fed on farm.

He says going from a first-stage to a second-stage finisher ration could save £15/t on feed cost, with a further £13/t saved going to a third-stage finisher. “The main saving is on protein,” he says.

“As the pig gets larger and the appetite gets bigger, mineralisation level can go down, decreasing sodium, phosphorus and calcium. Also, a pig reaches a maximum protein deposition rate at 65-70kg liveweight, so amino acids savings can be made after this time.”

He recommends farms look at the following:

With feed so much dearer than a year ago (see “How feed costs have risen since last summer”), farms should review feed conversion rate (FCR) and carcass weights in case savings can be made, says Premier Nutrition pig director Mick Hazzeldine.

FCR can range from 2.3 on the best farms to 3.2 on lower-performing farms.

“Such extremes require very different feeds and feeding programmes, with feeds as much as £30/t different in price,” says Mr Hazzledine.

“Reviewing feed specifications and feeding programmes is crucial. Remember of course that FCR is now worth twice what it was.

“Fat and phosphorus prices are particularly challenging. Cereal enzymes and phytase are very widely used and proven, as are acids in younger pigs.

“Alternative raw materials are clearly in great demand. Depending upon the geography then oats, beans and rye may offer savings, but of course many are chasing a diminishing stock. Enquiries have also been received on roots and silage feeding.”