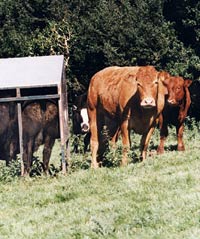 Assessing grass levels this summer will be critical in determining when to creep feed suckler calves to maximise production, according to Wiltshire vet Keith Cutler.

With grass already beginning to burn up in some areas due to a lack of rain, creep feeding may have to be introduced earlier. “Not only is it the calf you have to think about but, if the cow isn’t getting enough energy from the grass either, then she won’t be producing the quality milk needed by the calf,” he says.

Breed and type of cow can also influence when to introduce creep, says SAC beef specialist Gavin Hill. “Individual breeds will vary in the amount of milk they are producing and will determine when creep needs to be added, when milk quality and quantity begins to tail off.”

But introducing creep feed gradually is vital to avoiding acidosis and bloat. “For management reasons introducing creep feed six to eight weeks before weaning can help minimise stress at weaning, by getting the rumen used to solid feed and the calf less dependant on milk. The amount of creep should be built up to about 2.5kg before weaning,” he says.

However, for bull beef calves, introducing creep as soon as possible is something independent beef consultant David Hendy recommends. “By two months of age, bull beef calves should have ad lib access to creep feed, as the more weight you can get on early the better.”

By doing this, Mr Hendy expects calves will weigh between 50kg to 100kg more, aiming for 350kg at 7-8 months of age. “With continental crosses, laying down fat isn’t a problem, it just means you can get them gone as soon as possible, it’s about getting frame and size on a calf.”

But, for ease of management, splitting cows with bull calves at foot from those with heifers at foot would be easier, he says. “Feeding heifers from two months of age isn’t something I would recommend. Heifers and steers in most cases would only need creep feed a few months before weaning.”

However, creep feed is only there to supplement growth and is not there to take over the cow, says Mr Hendy.

“In spring calving suckler herds milk production begins dropping off in summer, this coincides with the energy density of the grass dropping and the increased nutritional requirement of the calves and means creep should be introduced to steers and heifers three months before weaning.”

“When you first start using creep, halve the amount of rolled wheat and barley and double up the amount of whole oats, as this is a good source of digestible fibre. After two to three weeks then return back to the standard mix,” says Mr Hendy.

Making sure there is enough feed space for calves is also essential, with Mr Hendy suggesting one feeder for every 20 calves. “Investing in creep feeding before weaning and putting weight on earlier on, is more cost effective than having to catch-up later on,” says Mr Hendy.