Vets and farmers are reporting a spike in the incidence and severity of pica in cattle across the UK, resulting in cattle deaths.

Pica occurs when there is a shortage of minerals – particularly phosphorus – in soils, which causes animals to ingest stones, soils and other objects in an attempt to access minerals.

Independent vet Kate Burnby says the “perfect storm’’ of an exceptionally wet winter, resulting in the leaching of soil nutrients, followed by a lengthy dry spell has triggered the condition.

Cattle are at risk in all systems and in all age groups, but Ms Burnby says the pica being seen this year is largely affecting lactating cows.

“It has been particularly bad. Anecdotal evidence suggests there are herds that are very badly affected,” she said, adding that farmers have reported losing cows.

Animals can die when they ingest so much foreign material and their gut becomes blocked.

Ms Burnby says deaths are unusual and most farmers observing the condition will notice cows licking the side of cow tracks.

“But then, when they go to AI cows, they will pull out a handful of gravel,” she explains.

Cattle have a depraved appetite, licking, chewing and eating unexpected objects such as plastic matting, string and urine and burrowing into earth banks to eat soil.

Pica can also be a result of learned behaviour from animals copying each other, although this doesn’t rule out an underlying deficiency.

She describes pica as a complex condition and urges farmers with affected herds to seek veterinary advice promptly.

Pica is difficult to treat because it can have multiple underlying causes, including phosphorous, sodium and fibre deficiencies, as well as other factors such as acidosis, fluke and parasite burdens.

“In intensive systems, some have been overfeeding phosphorous because of studies that purported to show that high levels can enhance intakes, but we now know there is no benefit in overfeeding. Supplement only to the appropriate levels.”

She recommends farmers work with their vet to evaluate the ration and animal health.

A Carmarthenshire dairy farmer has yet to find a solution to combating pica, after stomach impaction led to the deaths of two cows and emergency surgery on two others.

Iwan Francis had a low incidence of pica in previous grazing seasons, but it is much worse this year.

“It started sooner, in the second week of April, and we still have it,” says Mr Francis, whose milking cows have access to rock salt throughout the year.

Mr Francis runs 100 spring calvers and 100 autumn calvers and reckons the problem has been worse in his spring-calving cows. 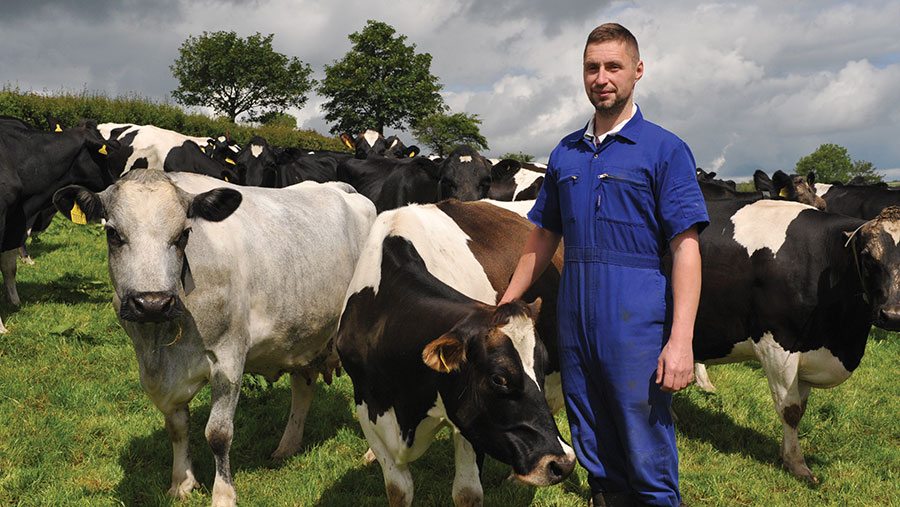 Introducing oyster shell powder in feed troughs at Nantglas, Talog, has previously helped, but not this year.

He has since added phosphorous to water and, when this didn’t help, doubled the quantity of the mineral in in-parlour concentrates. None of these eased the problem.

Watch a video of a cow with a severe case of pica being operated on by a vet; her stomach contents reveal the extent of her stone eating.

While dietary interventions have not yet helped, Mr Francis has taken steps to prevent his 200-cow herd accessing stones.

“Where there is a cow track in a paddock, I have put up temporary fencing and I am also pushing them into the yard quicker at milking.”