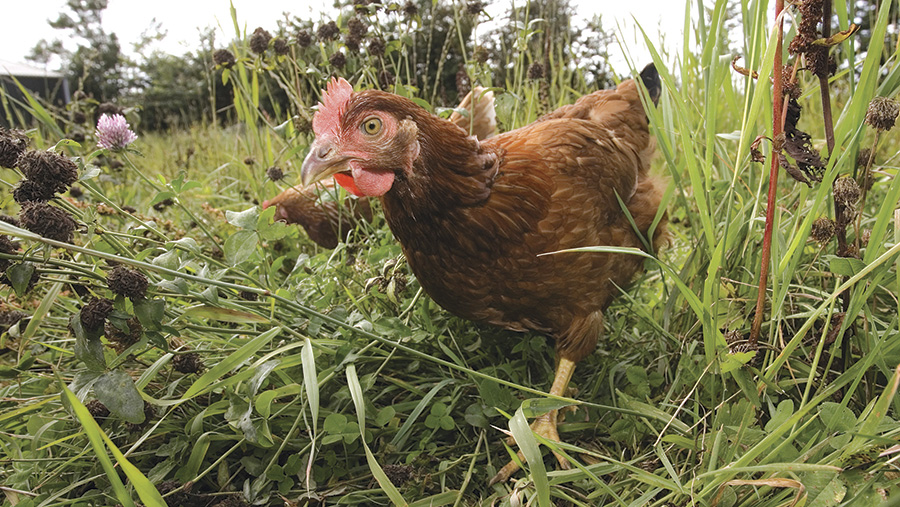 Fibre is considered the nutrient needed to “keep things moving”.

In poultry diets, it can have a host of benefits to bird health.

Indeed, incorporating the right kind of fibre into rearer and layer rations was a vital aspect of modern flock management, according to Paulien Rutten of genetics outfit ISA.

See also: Challenges ahead for insect protein in poultry diets

Apart from having a significant impact on feather pecking, there were other major economic benefits in addition, she said.

“As a nutritionist at ISA I work a lot on fibre in layers, and I am often asked why we should pay attention to it.”

The important thing was to use the right type of fibre.

Fibre in feedstuffs was not digested by enzymes, explained Ms Rutten, but fermented by bacteria in the gut.

It came in two forms: soluble, which could be digested through fermentation in the digestive tract; and insoluble or non-digestible fibre (NDF) which could not be fermented.

“What is essential for poultry diets is insoluble fibre with a coarse structure.”

Oat hulls are commonly used in more northerly areas, such as Scandinavia. In all cases it was important to have a coarse structure, rather than finer particles.

“Birds use insoluble fibre as a gut filling and structure to stimulate movement of the gastrointestinal tract, and thereby create a better mixing and digestibility of the other nutrients in the feed.

“It’s very healthy for the birds.”

During the rearing phase, it played a key role in developing the gizzard and increasing feed intake capacity, so that the bird in lay could ingest enough nutrients for a successful laying phase.

Fibre also had a strong impact on feather pecking.

“In the absence of a coarse insoluble fibre, birds sometimes eat feathers off the floor.

“They use the feathers as a substitute for the fibre they are missing.”

Some studies had shown that, when you provided birds with a small fibre or a coarse fibre, the effects were different.

“A normal fibre with a coarser structure will have more impact on the gastrointestinal health of the bird.”

Ms Rutten added that as part of her work, she found finer fibres such as lignocellulose more valuable in areas where feed intake was a challenge, such as in hot countries.

One piece of research had compared a control diet without fibre, with one diet with finely milled oat hulls and one with coarse oat hulls.

The first two diets were found to have similar quantities of feathers in the gizzard, while the birds given coarse fibre had ingested virtually no feathers, and the gizzard contained a much higher weight of feed contents.

It meant the oat hulls provided enough fibre to fulfil the birds’ needs for structural material, without recourse to eating feathers.

The amount of fibre to include in the diet depended on age and circumstances.

“In ISA we follow a guideline, starting with 2-2.5% fibre in starter diets rising towards 6% in the grower diet.

“At start of lay we reduce it to 3-4% to make room for energy and other nutrients, and then work towards higher fibre at the end of lay.”

In the UK it was recommended to start lay a little bit higher, at say 5-8%, because of the prevalence of free range, where the birds had more space to react to one another.

At the start of lay, feed intake was still low, but the feed nutrient requirements were high, so it was important to use less fibre so as not to dilute the diets, she said.

“Towards the end of lay, feed intake is adequate, so a higher fibre content dilutes the diet and helps control bodyweight.

“It makes the birds quieter and you have a lower mortality.”

John MacKay then went on to explain the potential benefits of Arbocel, a manufactured fibre source.

“Arbocel is one piece of the jigsaw to give you the perfect flock, said Mr MacKay, who handles UK sales.

“It’s a management tool to help your hens produce as many eggs as possible.”

He described it as a lignocellulose crude fibre concentrate with 71% crude fibre, 20% lignin and 70% cellulose.

This was very high compared with ingredients such as wheat feed at about 10%.

“It has a high water binding capacity, and 1g will absorb 8g of water, very quickly in about 10 seconds.”

Unlike other fibre sources, there was no mycotoxin risk: “Most fibre sources are the hulls of seeds, and we don’t hide the fact that ours is made from wood.

“We remove all the bark, and then process the whole tree.

“Our fibres are very soft and fine, totally insoluble and non fermentable. All it adds to the diet is fibre, no energy or protein.

“Particles are long and thin with unique characteristics.”

Those fed Arbocel had higher bodyweight, bigger liver and gizzard, and more enzyme activity in the gut, said Mr MacKay.

Other research had showed a significant reduction in feather pecking, he claimed.

Mr MacKay suggested it could be down to improved litter quality, increased fibre in diets, better satiety and more uniform flocks.

One further piece of research showed improved uptake of all the limiting amino acids from the diet, using a ration supplemented with Arbocel.

He pointed out that ordinary fine sawdust didn’t bind much water, it would simply float.

But because Arbocel binds the water due to the special milling technique, it resulted in 10% less water in the litter, he claimed.

The inclusion rate was 8kg/t into the finished feed, thereby diluting it slightly, but with no depression of performance.

Andrew Hollins, of Country Fresh Pullets, who has several of his own free-range sheds, said using Arbocel and lucerne as a fibre source had shown good results.

“Since January this year we have been running trials with Arbocel in the feed and supplementing the litter floor with bales of lucerne.

“Lucerne bales used in conjunction with a high fibre diet gave a very positive experience, and is something practical that we can do back at home on our farms.

“It stimulates interest and activity and gives something to peck at.

He explained lucerne was essentially a silaged product.

It was cut into 5-10cm lengths, dried in commercial dryers to about 10% moisture, and then baled in compact 20kg bales.

On Mr Hollins’ unit, among those birds at more than 40 weeks given the high-fibre diet supplemented with bales of lucerne, “the most noticeable thing is the good feather cover”.

He went on: “If you want to know what’s going into the birds’ gizzards, have a look at the litter.

“If you can see lots of feathers there, the birds are getting their NDF from another source, which has to be a good thing.

“If the feathers are in the litter, they wont be sourcing their fibre from the backs of their neighbours.”

A second benefit was that in the latest version of the RSPCA Freedom Food regulation, a destructible toy had to be present in the bird area.

“Lucerne bales satisfy that requirement. In terms of the small cost that it is, you’re getting two-for-one.”