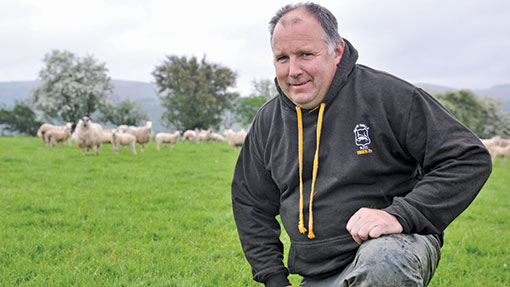 Lucerne offers a high-protein feed for fattening lambs and can be grown in higher rainfall areas, as Debbie James discovers.

Lucerne can be challenging crop to grow, particularly in wetter areas, and as a result is not widely grown by livestock farmers in the UK, despite its high nutritive value.

But one Welsh lamb producer is showing it can perform well in higher rainfall regions given the right soil conditions.

Rob Powell drilled a 4ha crop of lucerne after seeing first hand the high growth rates of lambs that were feeding on it in New Zealand.

Although Mr Powell’s mid-Wales farm has a typical annual rainfall average of 1,270mm, he drilled the crop in well-drained fields that warm up quickly in the spring and are not slow to dry out after wet spells.

Selected fields were also relatively weed-free, being grown in a rotation following a cereal and autumn root crop.

In the first year, the lucerne crop was cut twice, yielding 60 round bales weighing an average of 700kg. Mr Powell left a stubble of 8cm to avoid damaging the growing point and to speed up drying.

The regrowth then provided valuable autumn grazing for ewes post-tupping – although managing lucerne under grazing conditions can be challenging because there is a risk that sheep will damage the crown and there is also the possibility of bloat.

Rotational grazing is the key to minimising damage. Mr Powell, who farms near Builth Wells, divided his crop into five paddocks and grazed 136 ewes over a four-week period. Mild conditions had encouraged the crop to grow well that autumn and there was concern that it would be damaged by frost if it was not grazed.

Mr Powell says the crop recovered well after grazing and there were no cases of bloat among the ewes. “The sheep looked really well when they came off the lucerne, I will definitely graze it again,” he says.

Sue Buckingham, of the IBERS Grassland Development Centre at Aberystwyth University, adds that lucerne is primarily a cutting crop, however, light rotational grazing is less likely to cause damage once the crop has stopped growing in the autumn.

“It is very similar to red clover in that respect; the growing point needs to be looked after. The crop won’t last long if the crown is damaged,” she says.

Based on current performance and costs, and a crop lifespan of four years, lucerne silage will cost Mr Powell £75.50/t DM to produce; that includes inoculant, harvesting and silage wrap.

Although he initially drilled lucerne as an experiment, he has been pleased with its performance and advocates it as a valuable alternative to imported protein on farms where conditions are suitable.

It can yield up to 14t/ha of DM, produce 18% crude protein and energy levels of between 9.8 and 11.5 metabolisable energy. Depending on its establishment and management, it can last for between four and six years.

Dry matter intake is likely to increase if lucerne is used as part of a mixed forage diet, says Mrs Buckingham. “It is best fed with a readily available energy source to improve the utilisation of protein,” she explains.

Establishment is critical to the success of the crop and it needs a “lot of tender loving care” at the outset, says IBERS Grassland Development Centre’s Sue Buckingham.

“If lucerne is well cared for it will perform, but what it can’t cope with is competition from weeds, damage from machinery and livestock in wet weather and soil compaction,” she says.

“The soil structure has to be very good, with a deep soil that is quick to dry out. It should ideally be planted on a slope because it will die in waterlogged conditions.”

Soil pH is critical, too – a minimum of 6.2 and as high as 8.5 – and the phosphate and potash indices should be 2. The soil or the seed must be inoculated with bacteria to enable the plant to fix nitrogen – lucerne has the potential to fix nitrogen at around 200kg/ha a year.

Soil temperature is critical to the establishment phase. Crucially, the temperature at a depth of 10cm should be 10C and rising, advises Mrs Buckingham.

She recommends varieties with a winter dormancy rating of 4 or 5 for UK production. “Survivability is important but as there is no real lucerne plant breeding in the UK, farmers should look for varieties that survive well in a northern European climate.”