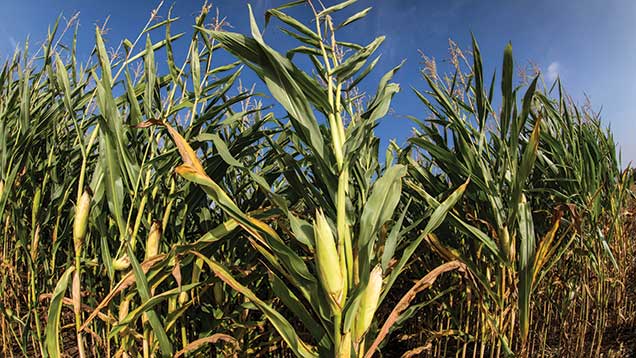 Maize growers are being warned to be on the lookout for early signs of eyespot in their crop and treat with a fungicide to prevent major losses.

Although most crops across the country have been clean up until now, wet and colder conditions experienced throughout August means the fungus is starting to creep into some areas.

Neil Groom, technical director for Grainseed, says he has seen cases of eyespot in exposed fields and in areas experiencing rain and cooler weather.

How to identify maize eyespot

And more crops could be at risk this year as many farmers opted not to apply a fungicide due to warm weather during July and early August, says Mr Groom.

He suggests for farmers harvesting in mid-late October or who have seen early cases of eyespot to apply a fungicide.

“Fungicides give six weeks of protection and will keep the crop green. You will, however, have to use a high-clearance, self-propelled sprayer to get through the crop at this stage,” he says.

The eyespot fungus favours a cooler and wetter climate with temperatures below 20C.

Spores can blow in from some distance, so even if neighbouring farms have not had a problem the spores could still reach unprotected crops, he says.

In bad seasons, maize eyespot has been known to take a crop from green to dead in just a few days.

“If eyespot hits at the end of September most of the sugar will have moved from the leaves into the cob.

“However, if it hits before sugar has had a chance to move, then you have got a problem,” he says.

Mr Groom suggests growers walk their crops now and look out for eyespot lesions on the top leaves.

“If you nip it in the bud you should be OK. However, eyespot can be strange and sometimes it can escalate and spread through a field and other times it can stay contained.”

“We had a good April, which allowed growers in some areas to drill earlier into a good seed-bed.

“However, a wet and cold May and June, particularly on the east coast, put crops two to three weeks behind.”

Simon Draper, agronomist at the Maize Growers Association, says warm weather is needed now to get good growth and a bulky crop.

He expects in some of the earliest crops harvest could commence as early as mid-September.

“The South and South West have fared better as they’ve had warmer temperatures. However, do not harvest too early as it’s important to get as high a starch content as possible,” he adds.

Keep up to date with maize harvest progress from September in print and online with Farmers Weekly’s Maize Watch series, in association with Grainseed.