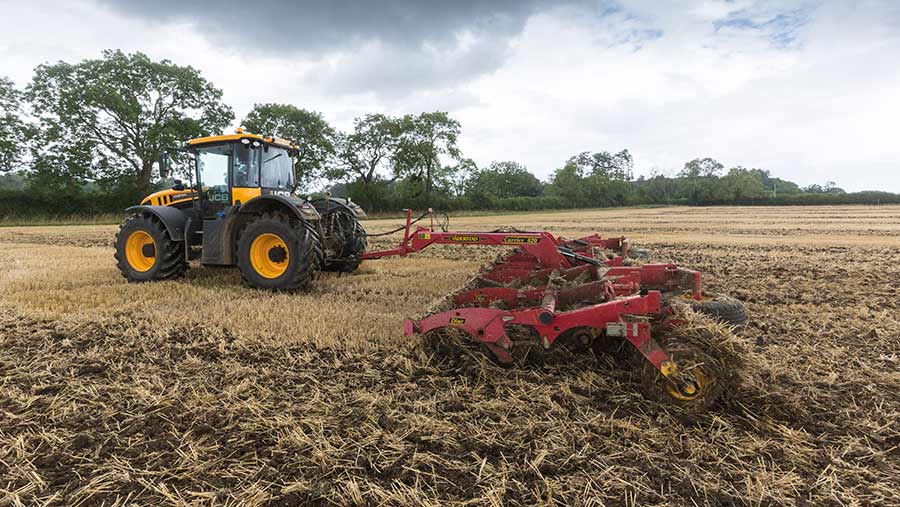 There are two types of min-till systems: deeper min-till and shallow min-till.

Deeper min-till involves cultivating to a depth of 22.5-25cm using a machine like a subsoiler with a leg and discs to cultivate the soil surface.

Shallow min-till machines cultivate the top 15cm of soil. Neither inverts the soil as a plough does. Sometimes it is a one-pass system and sometimes two, depending on soil conditions and levels of compaction.

What are the advantages and disadvantages of min-till?

The advantage is working only to a shallow soil depth. And because you are only using one pass – or two, at most – it costs less than ploughing.

However, if you have a problem with weeds, or apply a lot of muck, these may not be incorporated very well with min-till. Similarly, maize after maize will leave a lot of trash and the drill can’t plant seed into that very effectively, so you get poor seed-to-soil contact.

In theory, min-till does improve organic matter because it is not broken down by exposure to the air and, therefore, helps conserve soil structure. It is very good for fields at risk of soil erosion because the residue is kept on the soil surface, creating a mat that holds the soil’s top profile.

What are the cost-savings?

Savings of about £35/ha (£86.50/acre) can be made on a one-pass system. These are realised through lower diesel use and reduced wear and tear on tractors and machinery.

Where does it work well?

Min-till does a good job on light, blow-away sands because these soil types are at high risk of erosion and don’t tend to compact.

It is worth considering on heavy clays, too, because ploughing can create lots of soil clods, which can be difficult to work down to get an even seed-bed ready for drilling.

How do you assess if it is the right fit?

Getting the plough out because it’s a tradition isn’t a good justification. Whether ploughing or using min-till, objectives should include maintaining and improving the soil structure and creating the best possible seed-bed for drilling.

You have to be willing to change your cultivation method depending on what you are presented with.

If min-till is used, do the maize planting and growing phases change?

Seed rates, agronomy and weed control are exactly the same on a min-till system. But you do need a good drill with a proper trash-clearing system to remove rubbish from the seed coulter. This can be done with star wheels that move the material out of the way.

Graeme Cock hasn’t ploughed arable soils for about 20 years at his mixed farm in Devon.

He grows 81ha (200 acres) of maize, as well as cereals, with the maize fed to his dairy cows and incorporated into beef finisher rations.

He says he wouldn’t describe his system as min-till – rather “no-plough” – but says it suits his undulating land and small fields.

It also reduces establishment time, so it is a good system every year, he explains.

“It worked fantastically well last year when we needed to retain soil moisture and could cover the ground much more quickly [in comparison to ploughing].” 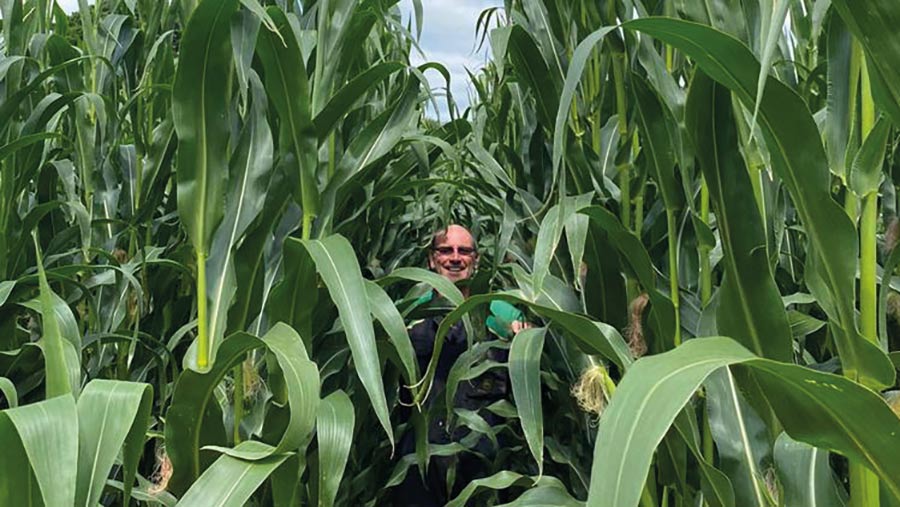 Mr Cock first tried no-plough in an attempt to improve soil structure and minimise soil erosion, and the system has evolved over time as he has gained confidence.

Farmyard manure, slurry and fertiliser are applied before cultivation. For maize, he uses a Horsch FG 450 cultivator, followed by a power harrow or discs and then the drill. The system uses two passes.

Ease of operation has been a big win and the farm has saved about £50/ha by making fewer passes, Mr Cock estimates.

“We have certainly reduced soil erosion. A lot of Devon banks are prone to that, but we have eliminated it almost completely by maintaining good soil structure.

“It’s all about not trying to do so much damage to your soils in the first place. We don’t subsoil – we never have,” adds Mr Cock.

He says no-plough has also reduced the risk of capping and increased organic matter in the top 10cm of soil.

Although he says there is no “prescriptive rotation”, maize is typically followed with a cereal such as wheat or barley.

“Seasons affect the rotation. In difficult autumns such as 2019-20, we had maize after maize, but that wouldn’t be what we would normally do.”

On occasions, grass is also featured in the rotation. “We don’t have definitive arable and grassland. We have a sizeable amount of permanent grass and other land that would have grass in rotation.

“The only ploughing we would do is if we take grass out and put it to maize. But once it’s out of grass, it never gets ploughed,” he explains.

For the past 10 years, he has been growing a lot of maize under film, and this also has benefits, he adds.

“It’s made a significant difference. It has given us the confidence to plant maize earlier without ploughing, and harvest earlier at a consistent quality.”

If the conditions are right, maize is typically planted from the end of March and is harvested in September.

“Last year, we planted on 5-6 April, but this year I think we’ll be able to plant at the end of March if the weather conditions stay right.”