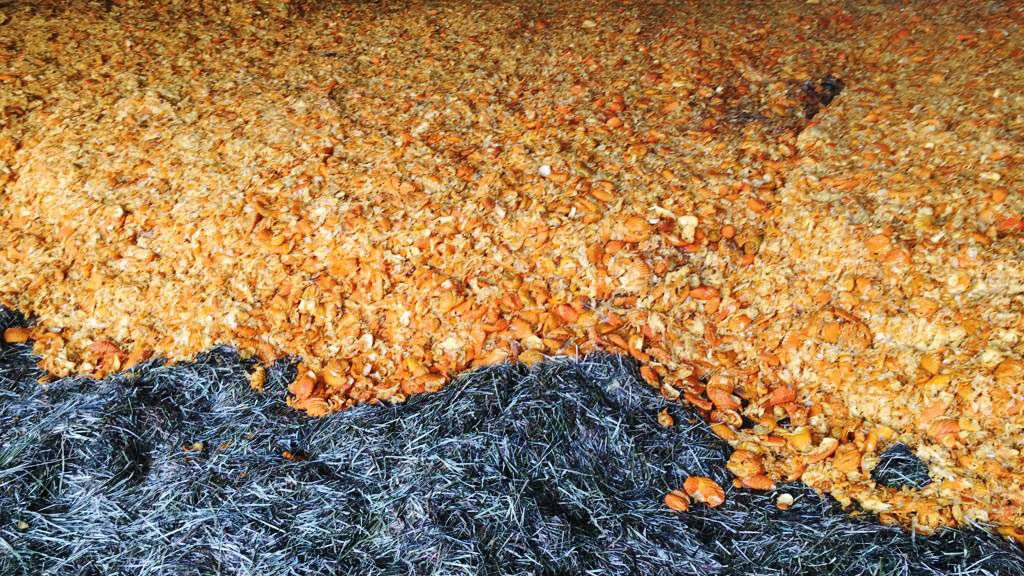 Innovative farmer Henry Tyrrell has used 60t of orange peel as a novel way of covering his wholecrop silage clamp while reducing plastic and providing fibre for his cows.

The 24-year-old, from Crick, Northamptonshire, trialled it for the first time this year in an attempt to reduce plastic and provide an additional source of fibre for his beef cows.

The idea partly came from visiting dairy farms through the family freeze-branding business.

“We knew dairy farms that had tried it before with success, but we have also used it on our brewers’ grains for the past five years, so we had a good idea of whether it would work. There is so much less waste because everything goes into the animal, and it worked really well with our brewers’ grains. 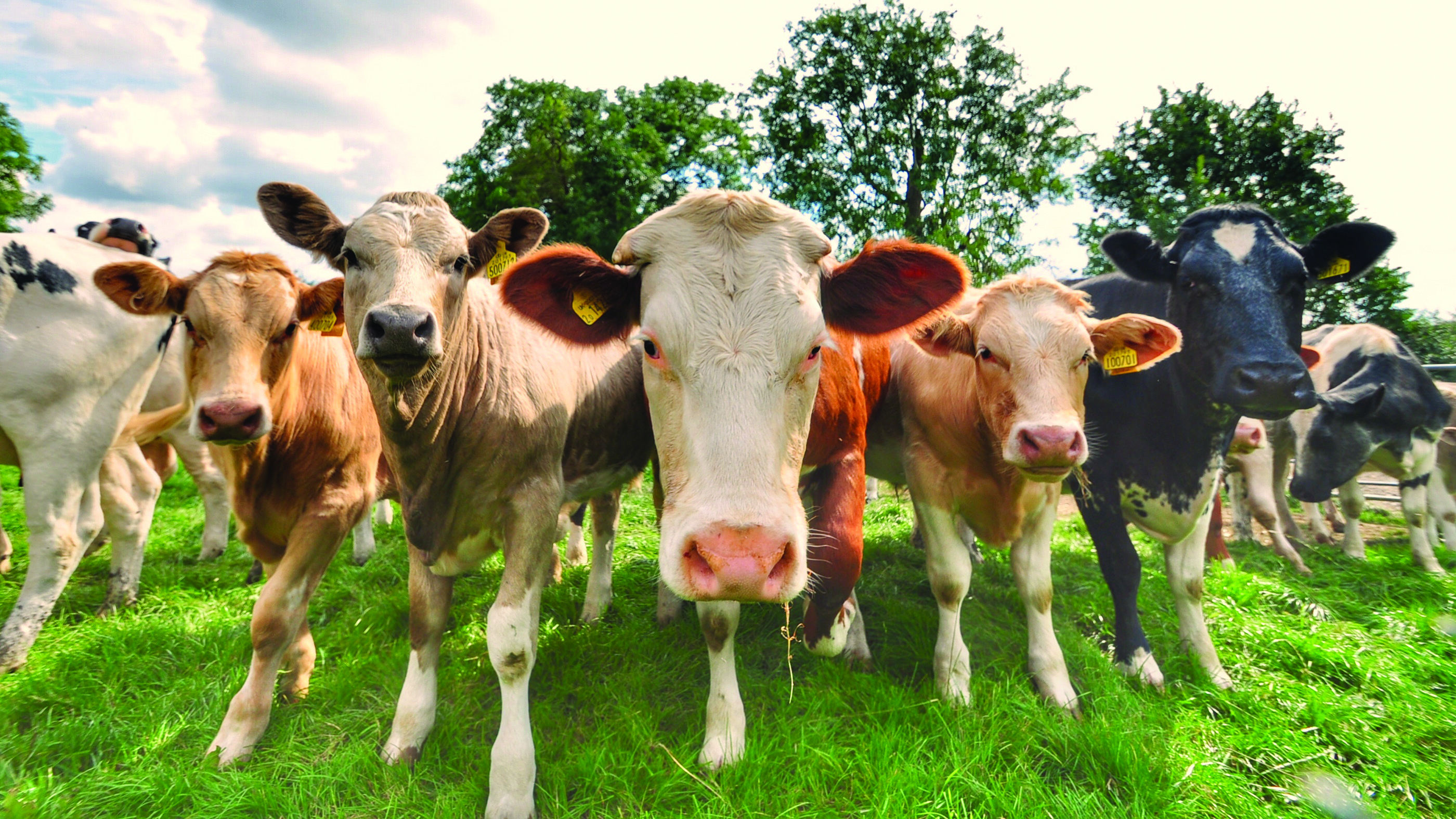 Mr Tyrrell, who graduated from Reading University with a degree in agriculture, has been pushing for more environmentally sustainable farming since returning home. “It’s what our customers want and in the world we live in, we need to be reducing plastic.”

The orange peel arrives in 29t tipper trucks and is tipped in the yard.

“We had two loads delivered – I would say two to three loads would be enough for most people. It’s what you would imagine it to be – it’s not really wet or dried, it’s just moist, and there are some whole oranges in there.”

Getting hold of enough orange peel to cover a silage clamp could prove difficult for some, but Mr Tyrrell has found a good contract with Nigel Bloom from Springvale Farm and Haulage.

“It is slightly more expensive than black plastic but we thought it might be more beneficial.”

Plastic sheets are still used down the sides of the 9x25m silage clamp to protect forage from the surrounding grass banks and the grass was still cut and ensiled in the same way.

“I haven’t done anything differently when making the silage, we don’t use an additive, we just did the same as we usually do but without the black plastic on top.”

The pit was rolled with a tractor and telescopic handler before 60t of orange peel was added to the top of the pit using a tractor and bucket.

Although it levelled itself quite well, they did use a hand shovel to ensure every bit of the pit was well covered.

The idea is the orange peel forms a crust 10-15cm deep.

Mr Tyrrell says: “I hope it seals well, in a couple of months’ time we’ll find out. When it rains the water might seep in and it might turn out to be an expensive experiment, but if you never try you never know.” 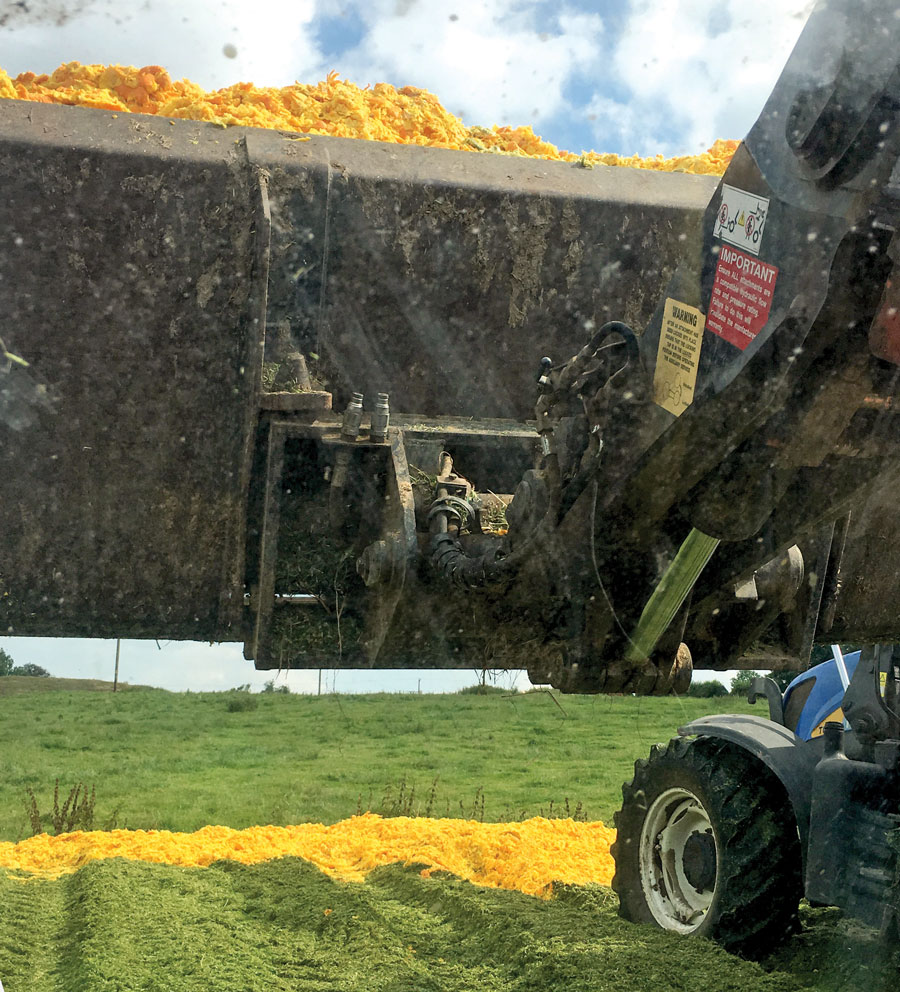 Although he hasn’t started feeding the wholecrop silage yet, he says he’s had good success with the brewers’ grains that had been covered in orange peel.

“With the brewers’ grains there are 4in of black crust, which is fed – the cows haven’t refused it and even if they do it’s just orange peel that’s wasted.

“Our nutritionist has told us to not feed too much of it due to the risk of tainting the meat, but they only get a minimal amount anyway, it’s got fibre, sugar and goodness in it.”

Anything the cows do refuse goes on to the muck heap and is then spread on the arable land.

Mr Tyrrell hopes the technique will also reduce silage waste. “Even with plastic you get waste, hopefully we’ll get less waste with the orange peel and an extra fibre and vitamin source for the cows.”

He uploaded pictures of the clamp to his Henry’s Beef Facebook page. “People commented about attracting wasps and birds, but we haven’t noticed anything. If a bird comes along it normally just sits on top and doesn’t even peck at the peel.”

Although orange peel may appear to be the solution to some of the plastic use issues facing agriculture at the moment, it may be the wrong environmental target to focus upon, says Dave Davies at Silage Solutions.

“I’ve seen farms using anaerobic digestion waste on top of their clamps, putting soil on top and then sowing grass seed – but if those techniques are not sealing it properly there’s no reason to suspect that orange peel will be,” he warns.

Oxygen can seep in and mould and other micro-organisms are likely to grow over time, which does concern him. “There will be varying levels of mycotoxins and bacteria growth, which are not beneficial for the cow.”

The top metre of the silage clamp is a weak point, says Dr Davies. “The average silage clamp has 25% of invisible loss as well as the top 1m of the silage, but with orange peel it could be 35% or more.  This represents a significant loss in terms of gaseous emissions.”

The variability of dry matter risks upsetting the ration, leading to overfeeding of concentrates or reduced yields, which also has an impact on greenhouse gas emissions, he adds. “These novel methods of sealing silage clamps probably aren’t saving the farmer money and could be costing the earth.”