Grazing pregnant ewes on swedes is proving the cheapest winter feed system at a Welsh upland farm at less than half the cost of feeding silage and concentrates. 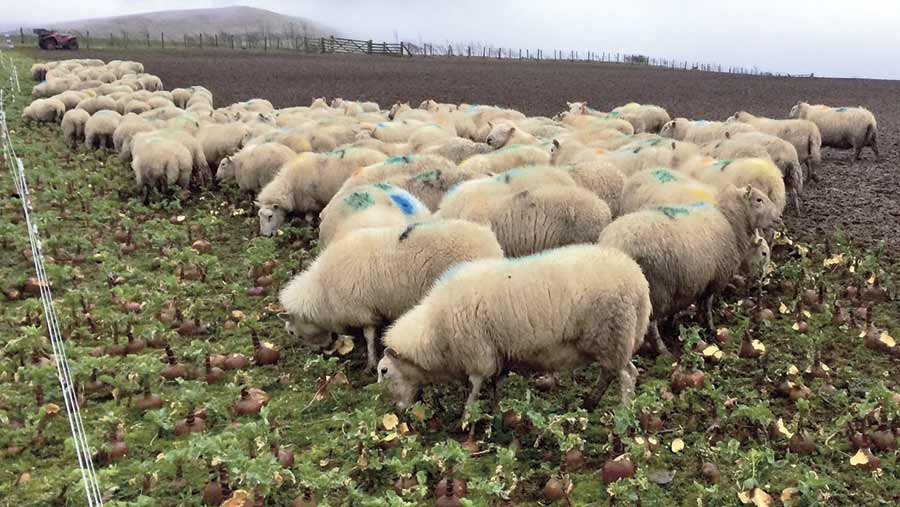 Environmental considerations were a reason for planting three-and-a-half hectares of swedes – the farm has joined Glastir, which restricts winter grazing on hill land and this created a feed gap.

Because each group was different sizes costs were calculated on a per head basis.

Fifty-five acres were allocated to this group of 205 yearlings. Once the impact this had on spring grass growth was taken into account, the cost of this feeding system doubled.

For the swede crop, the equivalent cost of taking the land out of production is £1.50 per ewe, or 20% of the total costs.

What the costs included

Costings included concentrates fed when the ewes were taken off the swedes ahead of lambing and the time and fuel costs associated with regularly checking ewes on winter tack.

Labour requirements were also taken into account plus an allowance for the rental value of any land used. This substantially increased the cost of out-wintering the yearling ewes on grass with concentrates and some silage.

The swede seed variety was drilled in June at a rate of 1kg/acre.

The land at Rhiwgriafol is a silty loam and relatively free-draining. Mr Glyn selected a field that was not too steep and had a grass runback of seven acres to avoid issues with run-off.

The field had been earmarked for reseeding because the quality of the grass ley was poor with a high weed burden. The field was treated twice with glyphosate before the seed was drilled.

Mixed aged ewes were turned on to the crop on 1 January and the fence moved every three to four days. After scanning in mid-January, both singles and twins were returned to the swedes.

Silage was also offered as a protein source because swedes are high in energy but low in protein. Only six bales were used in total.

Twins strip-grazed the crop until 4 March – three weeks before lambing – when they were housed and fed 400g of an 18% concentrate and silage.

Singles remained on the crop until just a few days before they were due to lamb and fed 200g of concentrates for the final 10 days.

“We only house a couple of days before lambing because there were 93 heifers in the sheds until then,” says Mr Glyn.

All ewes were given a bolus containing cobalt, selenium and zinc in October. Iodine supplementation was given via mineral licks.

At 249 ewes, the swede crop was understocked but there was good reason for this. “I didn’t want to put the young or older ewes on it because of potential problems it could cause with pulling their teeth forward and any tooth damage could allow a route of entry for the listeria bacteria so I narrowed it down to 249.”

This meant at lambing there were 1.2ha remaining but, with grass often in short supply in April, Mr Glyn says this would provide useful feed for ewes and their lambs.

He aims to graze this year’s planted crop earlier, on 1 December, to avoid this situation next year.

Mr Glyn will repeat the process of measuring the crop before making a final decision on when to start grazing next year.

Swedes are a good main crop for winter feeding because they provide low-cost, high-energy feed and they also enable good use of land in crop rotations.

“It doesn’t need to be based around the same system every year, farmers must consider what is going to suit the farm in each year,” she says.

“It’s also possible to combine various options for risk management to avoid situations like crop failure in a system that relies only on winter forages.”

Although the silage and concentrates combination is the most expensive, cutting grass for silage can be a good means of managing grass quality during the growing season.

Grassland use and maintaining mid-season quality is something which is also being highlighted through a number of Farming Connect projects taking place this summer.

“There is a place for feeding silage strategically during the winter months as it can help manage excess grass growth in early summer and can also help buffer grass supplies over the winter,” says Ms Nakielny.

A potential disadvantage of growing forage crops is the length of time a field is out of grass production.

At Rhiwgriafol, the field was taken out of production at the end of May 2016 and, following the crop with a permanent pasture grass ley, means that it won’t be available for grazing until the end of June 2017 following the reseed.

“It is not cost effective to plough up a good grass field but if you are replacing a poor grass ley with a much better one then it is a good to use it as a break crop in the rotation, not least to avoid potential problems with leather jackets and other pests associated with grass to grass reseeds,” Ms Nakielny advises.

Fields need to be carefully selected to provide shelter, water and a loafing area and water quality must not be compromised by run-off. Steeper fields should be avoided.