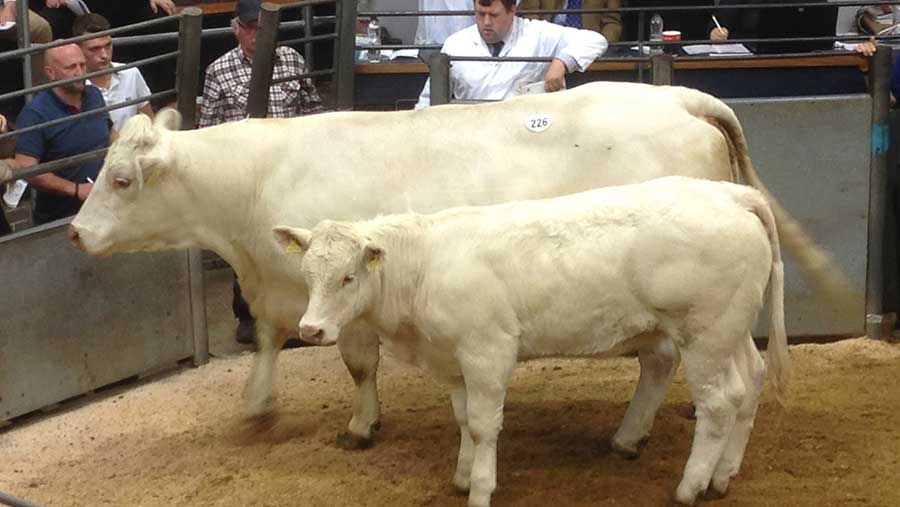 The dispersal sale of Friday 18 August sadly saw the dispersal of the Lockton Charolais herd on behalf of Robert Smith from Pickering, North Yorkshire, peaked at 4,250gns when animals went under the hammer at Borderway Mart last Friday (18 August).

The high-health, closed herd was established in the mid 1980s with the support of the herd manager Kenneth Brown.

The day’s highlight was the sale of the 2011-born Lockton Gemma and her October-born heifer calf Marigold, who were sold as a split pair for a total of 4,250gns.

Gemma, whose homebred sire Lockton Vigorous goes back to the 30,000gns Dingle Hofmeister, was purchased by A Gallagher, Newtonstewart, Co Tyrone.

Next in the trade stakes at 4,100gns, was another split lot. Tomos Rich was back in the bidding when buying the 2012-born dam Lockton Honey, whose homebred sire was sired by the £25,000 Highland Show supreme champion Maerdy Impeccable.

Following on at a combined price of 3,550gns, was a mother and daughter pair who again went on to different homes.

Lockton Jennifer, a 2014-born daughter of the homebred Lockton Federico, who was sired by the Perth junior champion Bromley Decisive, was purchased by JD Thomas, Llansadwrn, Carmarthenshire, who went on to buy two more.

Harmony is a January 2012-born daughter of the Maerdy Impeccable-sired Lockton Duarte and her October-born daughter Madonna is sired by Vexour Freddy.

Just behind at 3,050gns was another split mother and daughter pair, Lockton Delightful and her September-born heifer calf Lockton Mulberry.