Maize growers in warmer and good maize growing areas are being advised to start checking their crops in preparation for harvest.

He adds: “The heat in May and June allowed the maize to grow strongly and we have some lovely even crops across the country.

“Now is the time for growers in the good maize growing areas where there are a lot of heat units to start checking their maize crops.” 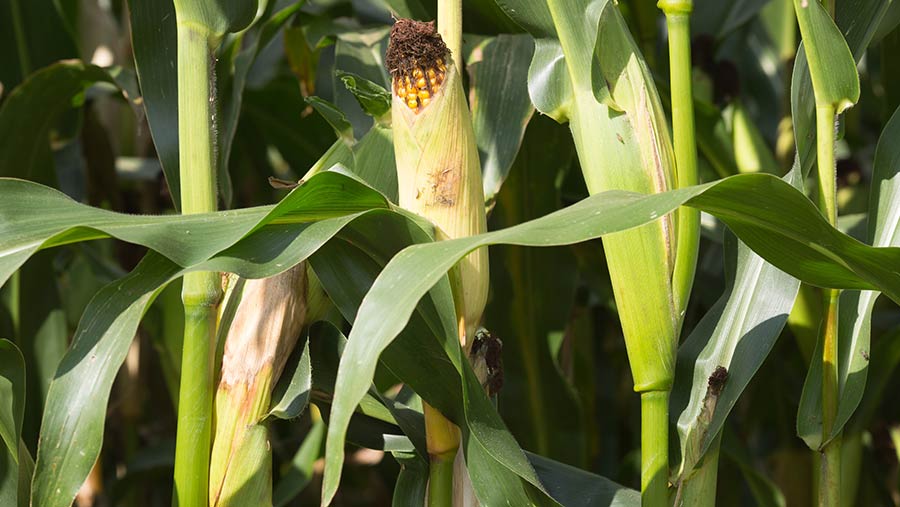 Farmers should assess 10 cobs in a row © Tim Scrivener

How to check the maturity of your maize crop

Farmers should walk well into the field, away from the headland, and open up 10 cobs in a row to observe grain maturity, he explains.

“Snap the cob in two so that you can see where the milk line is on the grains. You can also squeeze the grains.”

Maize is fit when you squeeze as hard as you can and can only get the smallest drop of moisture from the base of the grain, adds Mr Groom.

How often to check maturity

Growers need to walk their crops twice a week in September because maize can rapidly mature if the weather in dry and windy.

“Historically, maize matured at 2% per week, but modern varieties are quicker than that and in September it can be 5-6% per week during good weather,” Mr Groom explains.

He says growers should also be keeping in touch with their contractors in preparation for harvest.

“Many contracting teams are cutting over a wide region and so planning can be a major headache for them, so if you can keep the manager up to date it makes their life easier.

John Hancock, who samples for Farmers Weekly in Sussex, is very happy with his crops this year.

“Rain showers in June and July ensured our maize grew strongly and most fields will yield over 20t/acre,” he says.

“My sample field is the most mature, but I need to cut all the acreage at once so I will wait until it all reaches 30% to optimise the performance of the maize in the winter ration.”