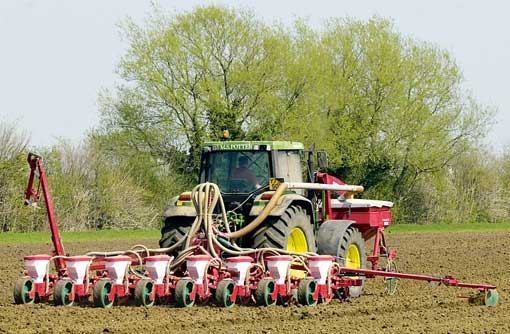 A major rethink is needed on nitrogen applications for maize crops. Current practice is costly, wasteful and creating a potential pollution risk, according to maize agronomist Ian Grandfield.

As maize growers plan this season’s drilling and seed-bed fertiliser applications, Mr Grandfield, who is based in Shropshire, says maize crops only need “a fraction” of the nitrogen that’s traditionally applied for the seedling stage.

“It’s clear that over-application of nitrogen doesn’t give extra yield. It wastes farmers’ money and becomes a potential source of nitrate pollution to ground and surface water.”

Mr Grandfield said the current practice is both ineffective and wasteful and results in maize crops being deprived of their highest nitrogen requirement in mid-summer, when they are at their most needy growth stage.

“The nitrogen needs of maize escalate rapidly once the eight-leaf stage is reached. This knee-high maize then grows to shoulder height (12-14 leaf stage) within two weeks and then achieves the tassling stage two weeks after that.

“Few other crops need such a large supply of nitrogen to fuel this level of prolific green tissue development as well as being paramount in the development of ear and grain in the maize crop.

“Only 10-15% of the crop’s nitrogen needs are required to reach the eight-leaf stage but from then to the tassling stage, maize needs more than 50% of its nitrogen and continues to demand about another 35% to take it through to cob-fill,” said Mr Grandfield, of Green Gem Agriculture.

Sustained uptake of nitrogen is needed by a growing maize crop during the cob-fill stage to minimise the remobilisation of nitrogen from vegetative to reproductive tissue. This avoids plants having to cannibalise their own leaves to provide enough nitrogen for grain development.

Mr Grandfield said the current practice of committing all the crop’s nitrogen to the seed-bed is “hit and miss” and puts its long-term availability at risk through leaching.

“In 2007 we saw the impact of a wet summer on maize crops, where seed-bed nitrogen was washed away and depleted reserves to the point where crops were starving when they needed it most in mid-summer.”

Unlike other crops, maize isn’t easy to top-dress – a practice that leads to high levels of leaf scorch if undertaken at the six-leaf stage. While US growers have tackled mid-season nitrogen applications, this hasn’t been mirrored in the UK.

Mr Grandfield said maize growers must reconsider how they meet their crop’s needs but admits they are still faced with the only option of applying a source of nitrogen that must be timed as close as possible to seed-bed preparation and drilling.

To achieve the most effective provision of nitrogen to sustain the crop throughout its development, he believes farmers should switch to a pure ammoniacal source of nitrogen such as ammonium sulphate.

“It not only delivers nitrogen but also a good level of sulphur, which is an important nutrient for maize. Ammonium sulphate is usually applied in liquid form pre or post-ploughing but can be applied to the seed-bed post-drilling as a pre-emergent.

“Ammonium sulphate resists leaching, and although losses will occur as it breaks down into nitrate, it has the best chance of delivering a supply of nitrogen to maize when it’s most needed.”

Urea is also an effective nitrogen source – albeit lacking sulphur – but Mr Grandfield said it must be incorporated into the seed-bed as soon as possible to avoid losses, which can be as high as 50%.