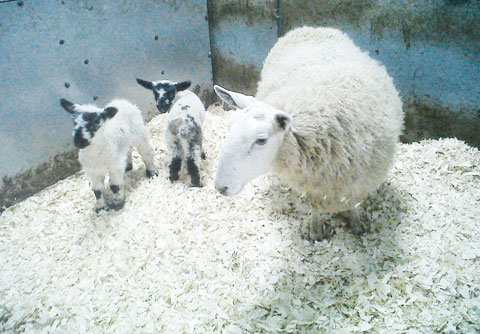 Managing and selecting the correct bedding material could not only reduce costs but also bring health benefits at lambing.

Sheep farmers are embracing alternative bedding options at lambing, but whatever material they opt for, managing it is key to maintaining the health, welfare and cleanliness of ewes and their offspring.

However, as its cost has increased and availability decreased, farmers are turning to alternatives.

Farmers will weigh up the advantages and shortcomings of these for their own systems, says Dr Genever, but every lamb producer will benefit from better management of bedding because it significantly influences animal health and welfare.

Every year up to 5% of lambs born in the UK die from watery mouth, a condition caused by E coli which is present in sheep faeces and can build up in lambing pens.

“We see a number of health problems such as joint ill and coccidiosis that are caused by damp and dirty bedding and lambs are at risk of contracting watery mouth if their mothers have dirty udders,” says Dr Genever.

“It is false economy to scrimp on bedding. It may be more expensive than it was, but if it is not managed appropriately it can cause disease problems that far outweigh any cost savings.”

When ewes are housed before lambing, water tanks should be checked as leaks will increase bedding use, as will feeding low dry matter feeds such as sugar beet.

Consider siting tanks and troughs on areas that can be scraped, suggests Dr Genever, but manage that muck appropriately. Poor ventilation, and the resulting condensation, and ineffective drainage will also increase bedding use.

At lambing, some producers will leave the ewes in the main pen until they have cleansed in an attempt to reduce the amount of bedding needed in individual pens.

Dr Genever says it may be quicker and easier to clean the main pen with a forklift, however, there is a risk of disease spread with this method, particularly with infectious abortions.

She advises against placing new bedding on top of dirty, wet material in individual pens because of the potential for disease transmission.

“Disinfectants – liquid or powders – can be effective as long as they are used in accordance with the instructions”, she says. “It’s about breaking the disease cycle, they can be used between batches to reduce the risk.”

Dr Genever suggests that for cattle, 1% of an animal’s bodyweight can be used to calculate the daily straw requirement and that this may be appropriate for sheep.

“If finishing lambs are being housed, the possible increased health challenge when lambs are kept on poorly managed bedding means that their growth rates will be reduced. Plus there may be issues with dirty fleeces and the need for belly clipping to ensure they are not penalised at sale,” she says.

Straw has been the traditional bedding, but high haulage costs and reduced supply have forced many to seek alternatives.

Karen Wheeler, ADAS livestock consultant, says there are a number of issues to contemplate when choosing a new bedding material.

Keeping animals dry and clean and maintaining a healthy environment are top of the list, but consideration should also be given to whether it will produce manure than can be applied to land or composted.

“A good bedding material should be comfortable, non-abrasive, non-slippery, highly absorbent of water and urine and low in environmental bacteria,” says Miss Wheeler.

Some key considerations when choosing alternatives are as follows:

• A project carried out in Wales by the red meat levy body, Hybu Cig Cymru found that woodchip with a moisture content of less than 30% is critical to maximising its absorbency. The health, welfare and cleanliness of the sheep were of an equally high standard for animals housed on straw and woodchip.

• Woodchip requires dry storage and takes up a lot of space because it is bulky. Regular turning of heaps during composting will encourage high temperatures and kill pathogens. This composted material can be re-used as bedding.

• Woodchip compost is not suitable as a soil conditioner until it is fully broken down, a process that can take up to three years.

• Sawdust is widely available, but some very fine products can contaminate fleeces and therefore make it less suitable for sheep bedding,

• Can produce a comfortable, clean bed if managed carefully.

• There have been some anecdotal reports that wet sawdust bedding can increase the risk of foot problems in sheep, according to the EBLEX Bedding Materials Directory.

• Manure can be spread on land.

• They are moderately absorbent, clean and can be dust-free.

• Bedding in pens stays dry and comfortable and farmers who have used shavings say the need to muck out is less than with straw.

• The waste can easily be spread back onto land, although the material can lock-up nitrogen.

• The time needed for bedding sheep has encouraged some farmers to install slats.

• Slats can be placed on top of concrete blocks in an existing shed and the manure produced cleaned out every year by lifting out each section manually or with a loader.

• However maintenance of this system is high as breakages during removal can be high. Dr Ronald Annett, of the Agri-Food and Biosciences Institute, Hillsborough, says this system is best suited to small flocks

• Larger flocks should consider purpose-built tanks, four feet deep with eight foot sumps at either end for ease of agitation.

• Tanks only need to be emptied every two or three years. Timber is the most common material used for slats as they can be easily made and replaced. Timbers should not vary in thickness or have bark or knots as they will weaken the timber and ewes’ legs are more likely to get caught.

Getting the most from bedding

• One pen for every eight ewes should be the minimum guideline.

• The pen should be bedded so no floor can be seen, but not too deep or the lamb may struggle to get to the teat.

• Top-ups may be required, especially if the ewe is cleansed in the pen.

• After the ewe has been turned-out, all bedding should be removed, the pen disinfected, allowed to dry (if liquid disinfectant is used) and re-bedded.

• Remember to clean and disinfectant the sides and any water or feed troughs.

• If the bedding is not removed between batches, consider using powder disinfectant or hydrated lime to try and reduce the disease level and ensure clean troughs are used.

James Dobie has seen a reduction in man-hours and lamb E coli levels since introducing pine shavings into individual lambing pens 10 years ago.

He had been looking for an alternative to straw to reduce the man hours needed to muck out the 150 individual pens every three or four days.

“It was difficult to physically push fork loads of straw down little alleys, it took too much time,” says Mr Dobie, who lambs 3,000 Suffolk x Scotch mules indoors over a five week period at Abbey St Bathans, Berwickshire.

Mr Dobie buys 336 bales of Bedmax pine shavings at £4.45 a bale, which works out at approximately 50p a ewe and says the shavings are more absorbent than straw.

“Straw is used for thatching because it sheds water and therefore only offers a temporary clean bedding layer. Wet straw is a very good environment for foot rot and bugs, but the shavings are mercifully absorbent.”

Afterbirths are removed and a handful of shavings scattered on the soiled area. Mr Dobie says the shavings not only reduce his labour requirements by half a labour unit, but he also no longer needs to routinely dose lambs with an oral treatment for E coli.

“The manufacturers will say they have evidence that pine has natural anti-bacterial properties, but whatever the reason we don’t have to dose lambs and that is quite a cash saving.

“We do get flare-ups, but only when it’s very wet outside and there is 100% humidity. What we have certainly done is to eliminate the necessity for routinely treating every lamb.” At the end of the lambing period the pens are removed and the floor is mechanically scraped.