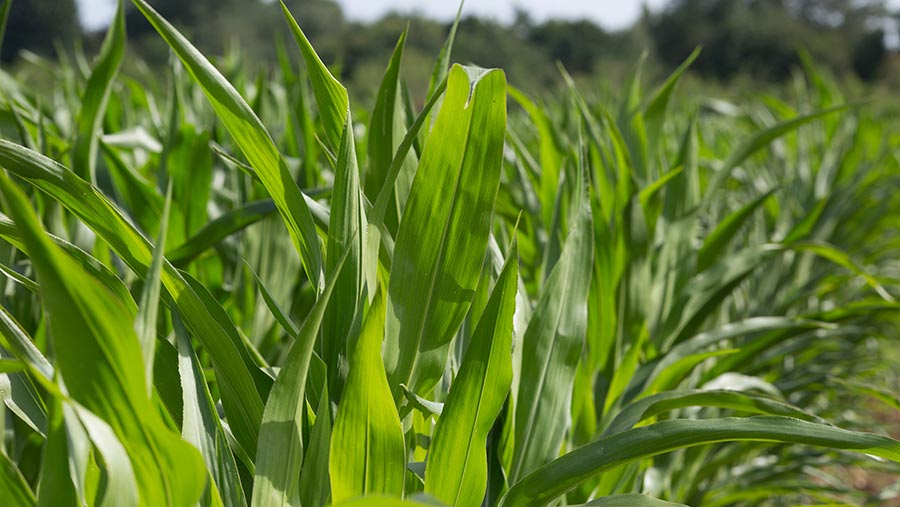 Maize growers are being warned that drought-like conditions could hinder the pollination of maize crops.

The warm weather is pushing many crops forward, meaning maize will start pollinating any time from 20 July until the end of the month.

However, moisture stress during pollination can reduce yields by 3-8% for each day of stress.

Agronomist Simon Draper of the Maize Growers Association says he is seeing crops at the two extremes this year.

“This warm weather is perfect for maize, as long as the crops can get their roots down. If we continue with this weather and the crops have some moisture, it will be a big crop,” he says.

“The issue is where the soil structure is not good enough and the roots cannot get down to the water. This is where we are seeing stressed crops with leaves rolled up. Maize roots can be the same height as the plants when the soil isn’t compacted.”

“Where organic matter is less than 1% the land is now droughted and the leaves are twisting up. If this warm weather continues there will be an effect on yield,” he says.

Water stress at pollination delays the silks from emerging (female part of the crop), reduces silk elongation and inhibits embryo development after pollination.

The silks may also become non-receptive to pollen germination. This will affect the number and quality of the kernels. Usually, the tassels (male part of the plant) start shedding pollen a day before the silks emerge.

Once the tassels can be felt running up the stover, they are about a week away from pollination. It is at this point that drought-ridden crops will need water, says Mr Groom.

Although irrigation may be impractical for many growers, those that have abstraction licences and equipment should consider applying two inches of water one week before the tassels start to shed pollen, Mr Groom added.

“About a week before the tassels start shedding pollen, you will need to consider irrigating drought-ridden crops with about two inches of water. Good pollination is important as 50-60% of the total maize yield comes from the cob and for this, you need good pollination and grain set,” he says.

Farmers applying fertiliser to their crops should also be cautious at this time of the year to avoid scorching the leaves.

Mr Groom explains: “If you are using granular fertiliser and the plants are dry, the prills will usually bounce off the leaves on to the ground. However, if there’s some dew on the leaves the prills can stick and burn them.

“You can now get nitrogen sources that you can spray without any scorching, so it’s worth considering something like Efficient 28, which is a liquid foliar nitrogen fertiliser based on urea polymers of variable lengths. The longer chains slow the breakdown, resulting in a phased release of nitrogen over six to eight weeks.”

How pollination occurs in maize

Each ovule (potential kernel) has a silk attached to it. When a pollen grain falls on a silk, it germinates, produces a pollen tube that grows the length of the silk, fertilising the ovule in 12-28 hours.

If fertilisation of the ovule is successful, within one to three days the silk will detach from the developing kernel.

Silks will remain attached to unfertilised ovules and be receptive to pollen up to seven days after emergence. Silks eventually turn brown and dry up after pollination is over.

How to assess the success of pollination

You can assess pollination success or failure in two ways: