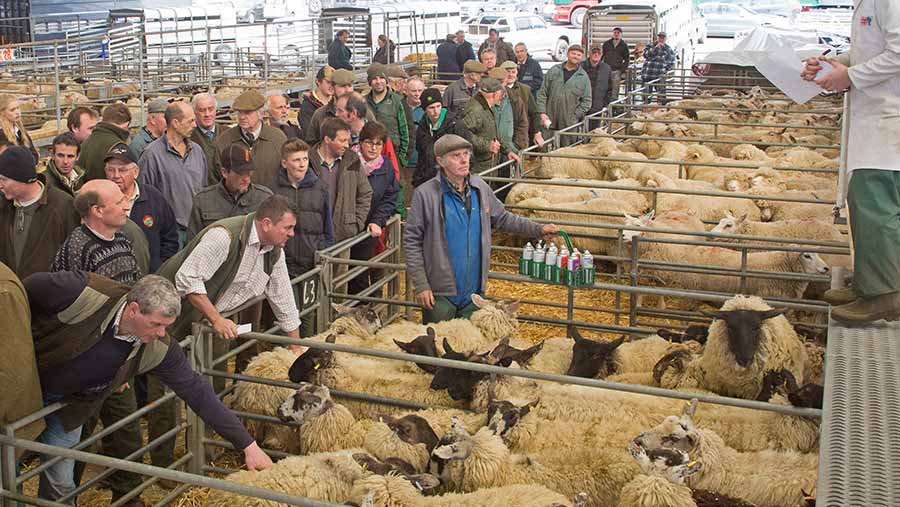 New Zealand’s numbers are also down, with February production and UK shipments back 10,800t (-19% on the year) and 26% respectively, according to AHDB reports.

Old season lamb numbers for the week ending 31 March fell 14,667 across Britain, ending 11.1% down on year ago levels.

This was driven by a 27% drop on the year at Scottish saleyards. Here, prices were back 7p/kg on the week to average 226p/kg, up 45p/kg on the year.

English marts saw weekly numbers back (-14%) on the year for only the second time, with the first being the week of the “Beast from the East” which left supplies 4% back on the year.

And while prices were back slightly from the week before, Easter trade still returned phenomenal prices as UK sheep farmers benefited from tight global supplies and a weaker sterling to aid trade.

A strong showing from butchers buoyed new season lamb prices to 270-280p/kg at Melton Mowbray’s Easter sale on Tuesday (27 March), with bidders out in force to secure lambs for Good Friday.

Home demand has driven the trade in recent weeks, according to auctioneer Tom Greenhow.

He told Farmers Weekly 40-50% of hoggs are being exported, which would be down from the more usual 50-60%, as home demands is taking more product.

“All of our local butchers have come out in force, I don’t know whether it’s because of there maybe being fewer hoggs about or consumer demand but it’s great to see,” said Mr Greenhow.

Meanwhile, hogg trade was strong, dampened slightly by leaner sorts that were discounted as 13 light (25.5-32kg) lambs average 2p/kg back on the week at 211p/kg, and trade overall hit an SQQ of 222.3p/kg.

“I think that to get lambs ready for this time of year, it warrants a good trade,” he told Farmers Weekly. “The extra feeding, lambing labour and feeding and housing of the early lambing ewe mean higher costs.”

Hogg supplies are expected to fall away post-Easter at Hereford, where Richard Hyde is already seeing numbers back on the year.

“We would be having about 2,000 through 12 months ago,” explained Mr Hyde, who has noted a lot of lambs finishers on the light land to the north of Hereford 50% down on numbers.

“Trade is flying due to a combination of many things. I think it helped having the Muslim festivals fall when they did; that kept the trade up last summer, with the follow-on effect being higher slaughter numbers in 2017. Lower New Zealand production has also helped.

“Hogget numbers can’t possibly be there, otherwise they would be out in force with the prices being so good.”