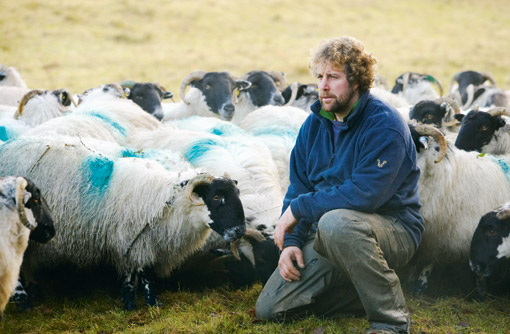 Massive sigh of relief this week, our TB test was clear. It is stressful enough for us and the cows being hounded around twice in a week, but the welcome news certainly helped us relax after a couple of hectic weeks’ testing. We will now be able to leave the cows in peace until they start calving in April.

We have also been scanning, with some very good results from the Scotch and Swale crossing ewes averaging about 170%. Neil is very pleased and as usual has pound notes in his eyes thinking about those mule lamb sales in September.

Just before Christmas I bought nine Belted Galloway heifers as a family present. They have settled in well and Gemma and Tom are very pleased with our fledgling herd. We have a busy road passing through a common outside our farm gate and our Black Galloways were never very visible. Hopefully the Belties will stand out much better on those dark Dartmoor nights.

Hollywood came to Dartmoor with War Horse this month. It was filmed on our doorstep back in 2010 with my Whiteface Dartmoors appearing as extras. Steven Speilberg raved about Dartmoor as the third character and it was fantastic to see our local village and the moors on the big screen. I even got to chat to Chris Evans last week on Radio 2, who was very impressed with the sheep in the film. Thanks to my appearance I will now be known as the “shepherd to the stars”.