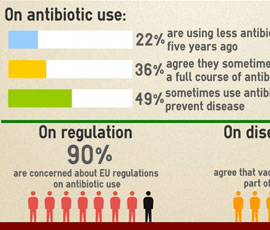 As part of Farmers Weekly’s Making Sense of Medicines Campaign, we asked livestock producers to tell us how they use medicines on farm. 337 farmers filled out our online survey, Aly Balsom gives a summary of the results.

British livestock farmers are world leaders in animal welfare, however results from our responsible medicine use survey show there is scope for producers to use medicines more effectively.

The survey highlights how many producers are taking a shot in the dark when it comes to worm treatment meaning much of their efforts could be futile.

Nearly three quarters of respondents had never tested for wormer resistance on farm, despite the fact SCOPS believes 100% of English lowland sheep flocks and 83% of upland flocks are resistant to white drenches, and 75% could have triple resistance to white, yellow and clear wormers.

This means farmers who have not established resistance status have no idea whether their treatment choice was the right one.

In fact, only 48% said they didn’t know whether resistance was a problem, meaning a proportion were guessing as to whether they did or didn’t have an issue.

At a time of tightening margins, making uninformed decisions about the treatment of your animals is not only taking an unnecessary gamble with the health of your stock, but also hitting your pocket. Only by using actual facts and figures can you make informed and profitable choices.

Faecal egg counts were recognised as being important in establishing if worming was necessary by 42% of farmers surveyed. But this means over half were again leaving it down to chance. Such an approach could lead to unnecessary, costly treatments and the potential for resistance – an area 86% of respondents said they were concerned about.

Encouragingly 22% used less antibiotics than they did five years ago, suggesting improvements to animal health. However, half admitted to sometimes using antibiotics to prevent disease – an area that is likely to come under particular scrutiny in revised EU policy.

Safe medicine use in livestock campaign