The shortlist has been announced for the new look National Milk Records/Royal Association of British Dairy Farmers Gold Cup, which has been opened up to a wider range of producers.

Farmers Weekly takes a look at the six dairy farmers who have made the selection. 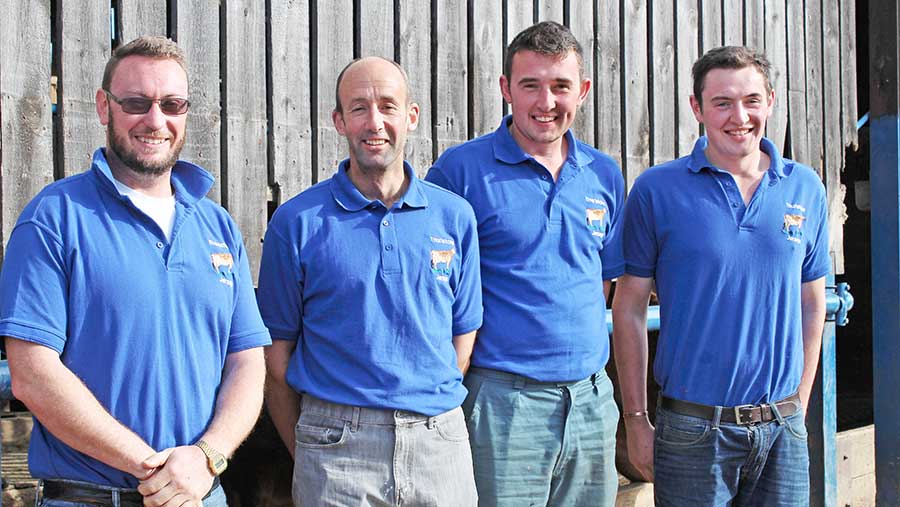 About 60% of milk is produced from home-grown forage – mainly grazed grass with lucerne, fodder beet, grass and maize silage used in a total mixed ration.

Thomas took over the management of the farm in 2013 from his parents John and Susan and has been keen to maintain genetic improvement.

Along with his herdsman Richard Saxby, they have set breeding criteria based on improving milk quality and maintaining legs and feet.

They are rolling out a genetic evaluation of the herd with a view to genomic testing youngstock.

Cow comfort is a priority and they spent £30,000 on new cubicle mattresses and toppers last year.

In the next 12 months, Thomas wants to reduce borrowings significantly.

Keen to promote their milk locally, the Dickinsons have set up a vending machine at the village pub supplying fresh milk and butter, selling about 400 litres of milk a week. 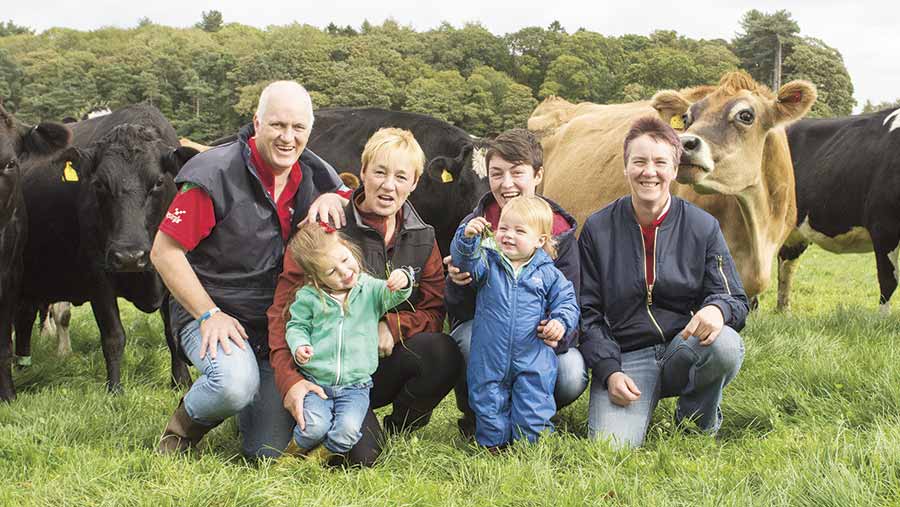 David’s mission is to develop a grass-based dairy system providing a lifestyle and income equal or better than that which could be earned off-farm.

Together with his wife Carol, daughter Vicky and sister-in-law Sue Pope, he runs a paddock-grazing system and switched to once-a-day milking in 2011.

This alleviated the problem of accessing half his grazing platform which involves crossing a very busy commuter road close to the North Wales Expressway and also cut labour requirements.

Now in their seventh year of once-a-day milking David stresses the system hasn’t compromised cow yields, health or the profitability of his business.

All cows are dried off by December before calving starts early February.

Once calved, cows are turned out to grass and breeding starts early May. They target fewer than 10% not in calf by 70 days, with 2017 scanning results showing that 85% of cows are in calf by six weeks. 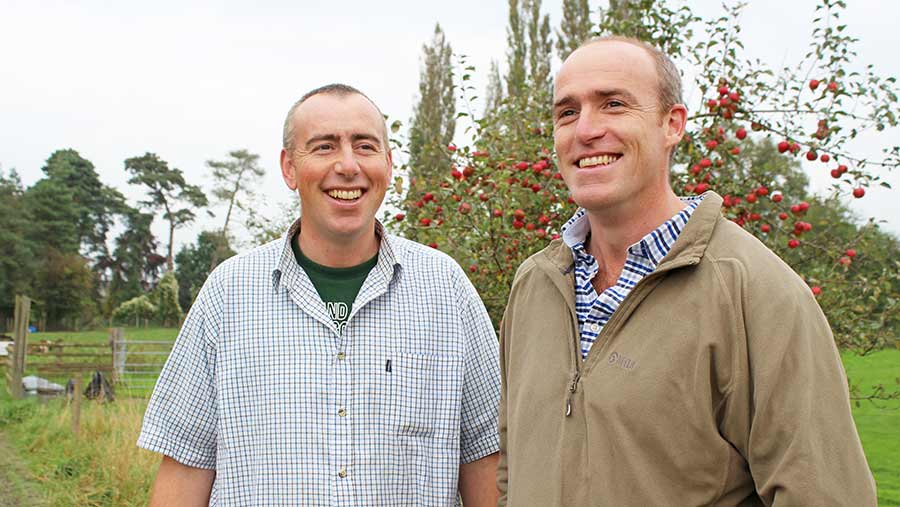 The light loam over gravel soils that run down to the River Arrow, low rainfall of 711mm makes The Leen an ideal set up for an autumn-calving paddock-grazing system.

Brothers Rich and Chris Norman aim to minimise any health risks by using BVD tag and test for calves at birth and blood testing them at six months old then monitoring the milking herd using a milk sample.

They also vaccinate for IBR, BVD and leptospirosis.

The skilled dairy team is one of the Normans’ priorities.

Autumn calving starts on 4 September and continues for 10 weeks.

Turnout is as early as possible in February.

They aim for 12.5t DM/ha and produce 73% of their milk from forage, keeping in parlour feeding to a flat rate of 950kg per cow fed in early lactation. 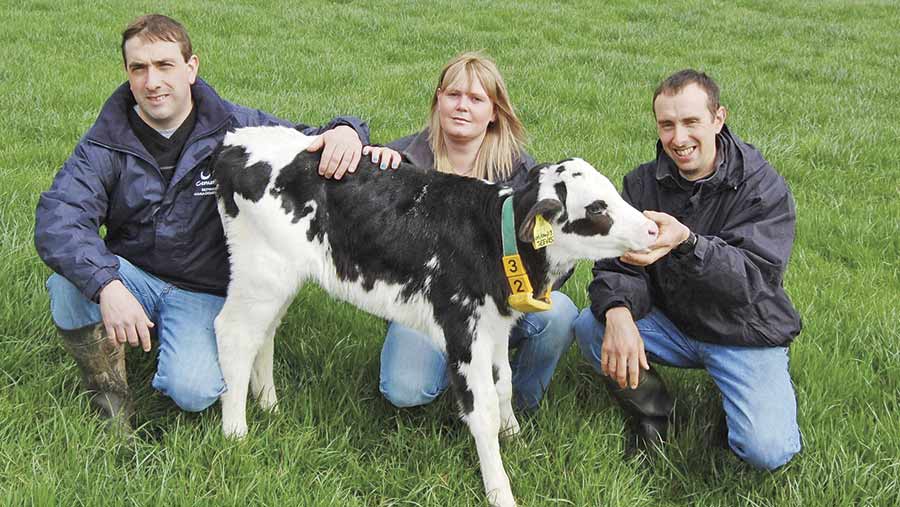 Brothers Darren and Stuart are obtaining pregnancy rates of 25% at their 410 Holstein farm in Northern Ireland.

It is the third time the McMurran’s have qualified for the Gold Cup finalist line up in the past four years.

But this year they have done so against a backdrop of herd expansion, adding 150 cows and a new cubicle shed

They target a level milk profile and an average daily output of 40 litres a cow.

“Land is the limiting factor here in Northern Ireland, so we look to maximise output per cubicle while controlling inputs,” says Darren.

Used for the high-yielding group, the new sand cubicle housing looks to be contributing to cow performance.

The average for this group of cows, that have been in the house for the past 18 months, is 54kg/day of milk with a somatic cell count of 89,000 cells/ml.

The McMurrans also stick to strict milking protocols including pre-and-post dipping and a cluster flush system to help to keep the herd’s average somatic cell count on a downward trend.

They use the National Milk Records’ polymerase chain reaction test to help identify the pathogens and determine the best treatment. And any cows with more than three cases of mastitis are culled.

Working closely with Newry vets, all animals on the unit are vaccinated for BVD, IBR and leptospirosis. 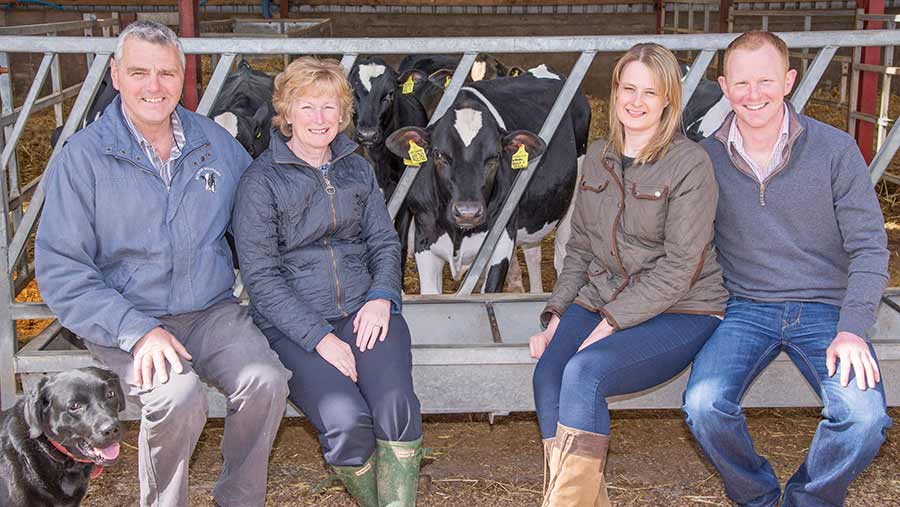 Having come runner-up in 2013 and 2015, could it be third time lucky for the Bilsrow Holstein herd?

Run by James Tomlinson and his wife Eleanor in partnership with James’ parents David and Sheila, the 270-cow pedigree herd is yielding an impressive 11,383kg at 4.27% fat and 3.16% protein.

James attributes some of the success in herd health – and fertility – in this high-performance herd to breeding policies.

A balanced approach has always been taken to sire selection. “We want to breed milky healthy cows of average size and with the strength to last at least five – and preferably more – lactations.”

About 80% of inseminations are with genomically proven sires.

Well-known for his cattle breeding expertise, James uses sexed semen on heifers and breeds herd replacements plus 50 heifers that they sell along with and 25 stock bulls a year.

Looking forward, James wants to see longevity improve further and he is working with his vet to reduce antibiotics use across the board. Following a selective dry cow therapy programme, 30% of the herd does not receive antibiotics at drying off.

Through the Garstang Discussion Group and vet discussion group meetings he keeps up to speed with the performance of his herd versus others in the area. 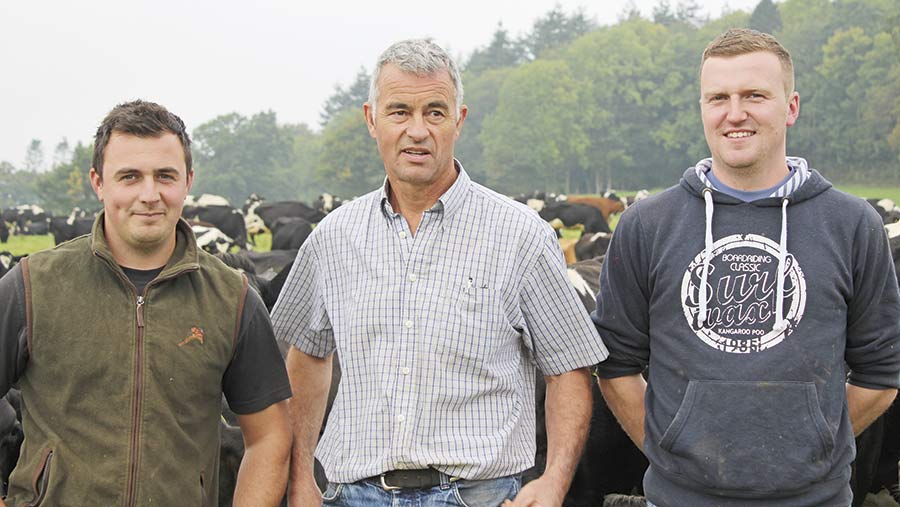 For Andrew and Rachel Giles success is based on looking after the soil and grassland and breeding the right type of cow that can graze from February to November on a tight stocking rate and with superb fertility.

They look to complete calvings in 11 weeks in spring and get more than 78% back in calf in six weeks.

They are growing 13t of DM/ha from grass and feed only 800kg a cow a year of concentrates.

Fit healthy cows at drying off, selective dry cow therapy and a transition ration with the right balance of minerals helps with calving and mating, with conception rates and calving interval hitting 55-60% and 375 days respectively.

Farm performance is carefully monitored and they are active members of local discussion group Wye Graze, which sets benchmarks for similar dairy units in the area.

“The aim here is to control costs, be technically efficient as grass and dairy producers so we produce as high a value product as we can, and make sure we make a profit even when milk prices are low like they were in 2016,” he adds.

Routes to entry have changed for the 2017 Gold Cup.

As well as entries from herds with official milk records that met specific criteria for milk production, somatic cell count and genetic merit, the spring-calving index, that also appears on the herd’s milk records, was considered, if applicable.

Herds could also be nominated for entry by discussion group leaders and grazing groups.

The winner and runner-up will be announced at the RABDF’s Dairy-Tech event, at Stoneleigh Park on 7 February 2018.