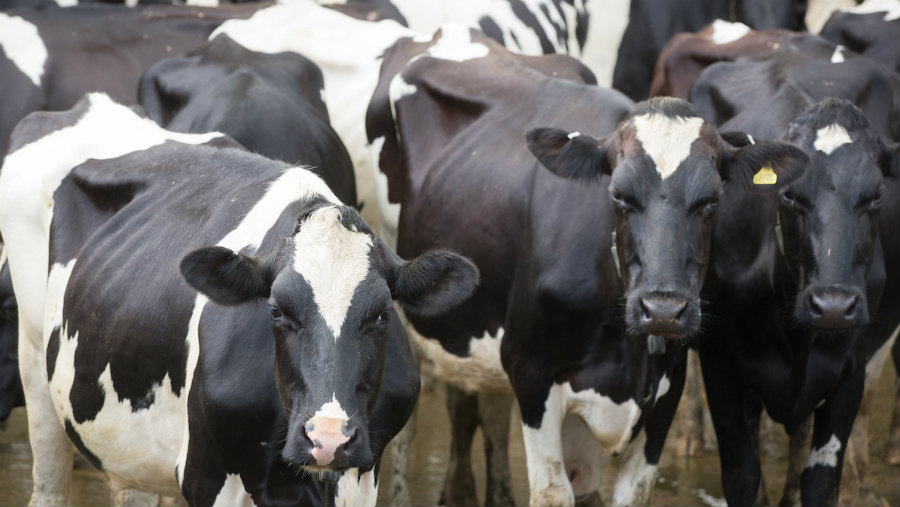 The shortlist for the 2018 Gold Cup has been revealed.

The winner of the prestigious prize, sponsored by National Milk Records and the Royal Association of British Dairy Farmers, will be announced at Dairy-Tech, Stoneleigh Park, Warwickshire on 6 February next year. 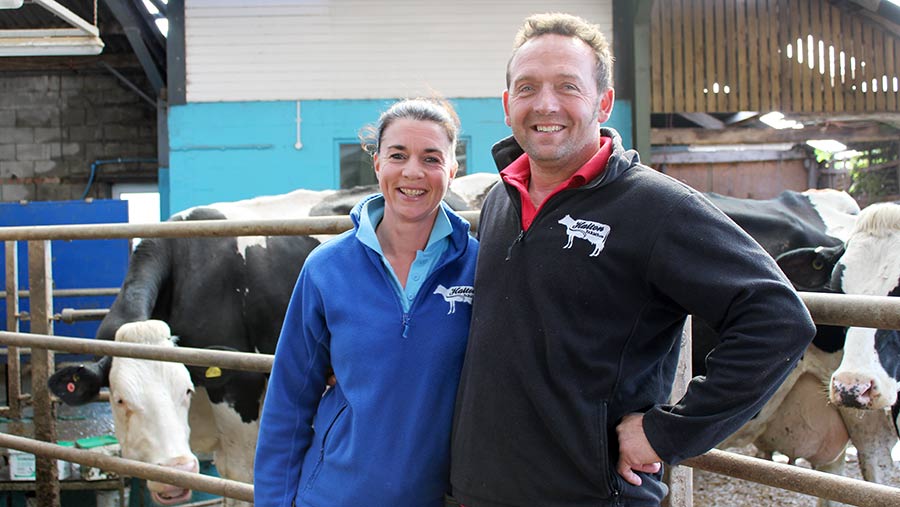 Tom and Karen Halton have tried to future-proof their dairy business by switching from Holsteins to a crossbred herd.

The aim is to breed strong healthy cows with longevity and health benefits, resulting in a low-maintenance cow which looks after herself.

Herd health and welfare is also a priority for the partnership, which won the Johne’s best in practice NMR competition in 2016.

Two years ago, the Haltons began direct sales of unpasteurised milk from a vending machine on the farm, which also sells free range eggs from the farm and locally produced cheese.

Their son Jack came home to work full-time two years ago and has also invested in his own digger hire business to help safeguard his future. As well as their herd manager, the Haltons employ a further eight full- and part-time staff.

“For the future, we don’t want to grow but we want to focus on becoming excellent in everything we do,” says Mrs Halton. “We want to consolidate the business so that we become more efficient and make money in a volatile marketplace.” 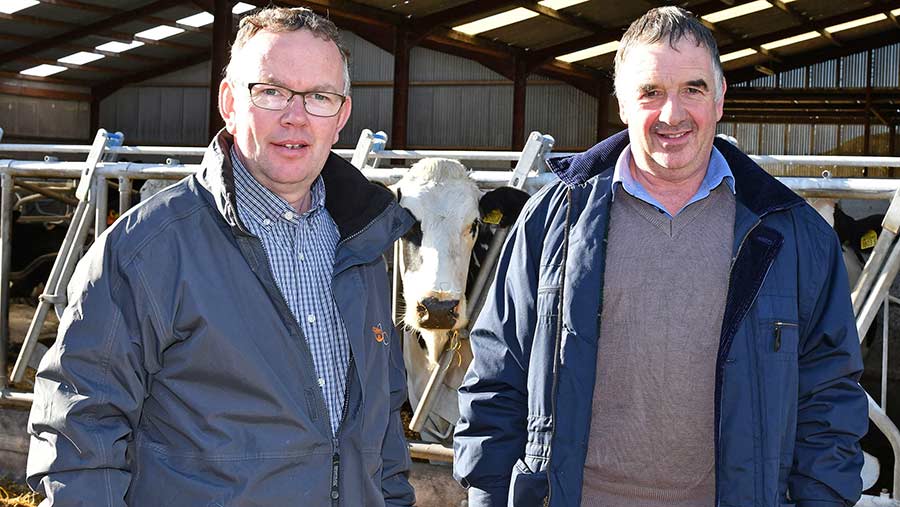 In just 10 years, brothers Stephen and Mark Montgomery have built up their pedigree dairy enterprise in Northern Ireland from scratch.

Their first 100 pedigree Holsteins were bought from a neighbouring farmer who was going out of production and the cows were walked the half-mile up the road on September 5, 2008.

Now the brothers, following substantial investments in land, buildings and cattle, are consolidating their business and focusing on fine-tuning their enterprise.

Mark does all the machinery work and daily cow management, with both sharing the milking. No additional labour is employed but contractors are used for seasonal work.

The herd has been closed for the past eight years and now yields of 10,000kg a cow are being maintained. Stephen, who looks after the breeding side of the management, is using PLI as the main criteria.

They are using genomic bulls and plan to genomically test heifer calves this year.

The system is simple and traditional. Cows are grazed during the summer and fed a TMR which is topped up to yield in the parlour.

“Looking to the future we will strive to improve technical efficiency by using the latest technology and innovation,” says Stephen. 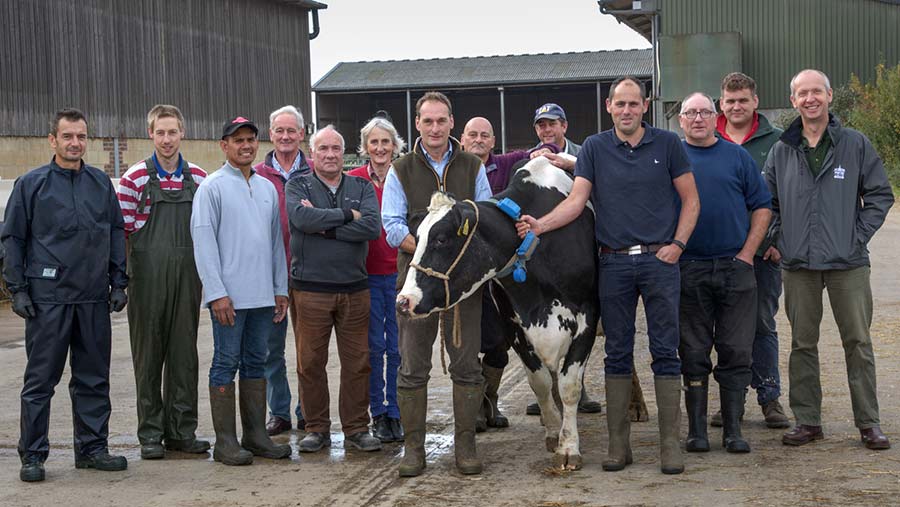 Two key factors that contribute to the success at Stowell Farms are good teamwork and regular KPI reporting to keep the business on the right track.

Stowell Farms looks after the agricultural enterprises on the family owned 1,100-ha Stowell Estate, based in the heart of the Pewsey Vale in Wiltshire.

An AD plant was also built on the site to process arable crops and slurry. This plant produces all the electricity required by the farm and 83% of output is fed into the National Grid.

Good health is key to the success of the herd, with great emphasis on early detection of lameness through fortnightly mobility scoring as well as regular fresh cow checks.

“We check the cow’s temperature four and seven days post calving. And on day four we also test for ketones using a meter,” Mr Moore says.

Since signing up to a Johne’s scheme they have reduced the proportion of “red” cows in the herd to just 4%. 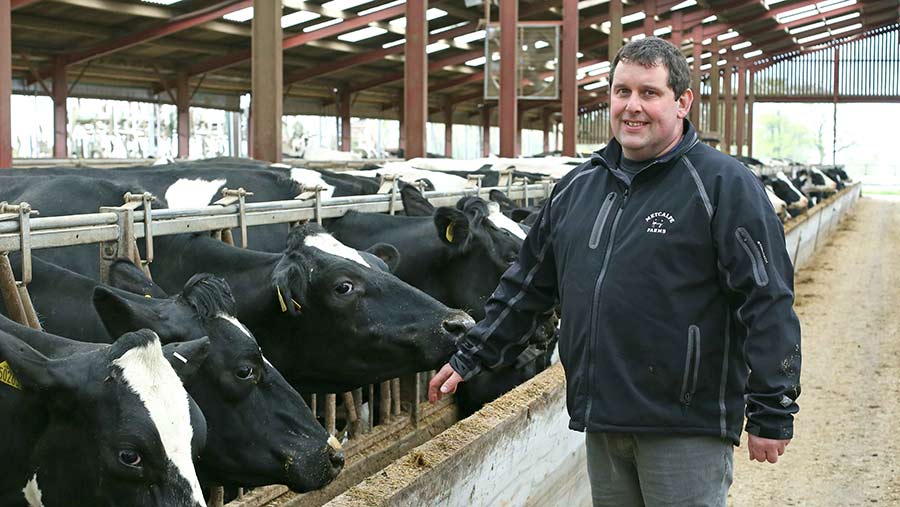 Cow numbers have grown from 900 to 1,300 in just two years at Metcalfe Farms.

In that time, production figures have increased, calving interval has fallen by 20 days and they have knocked 30,000 cells/ml off their average somatic cell counts.

Owned and run by brothers David, Brian and Philip Metcalfe, the business includes haulage and arable enterprises with Philip managing the dairy.

When running a large herd on a permanently housed system, good health and fertility are essential.

Philip selects sires that score well for type and avoids “extremes”. He explains: “High locomotion score is vital, and we look for a PLI that’s greater than 600. We also look for a minimum of 700kg of milk, and positive butterfat and protein percentages.”

The herd has been classifying with Holstein UK for more than 20 years.

“It’s a vital tool for breeding,” Philip says. “During the past couple of years, classifying has highlighted that some of our heifers were becoming slightly straight in the leg and had shorter teats. So we are now avoiding sires with those traits.”

The Firm of A Harvey, Drum Farm, Beeswing, Dumfries 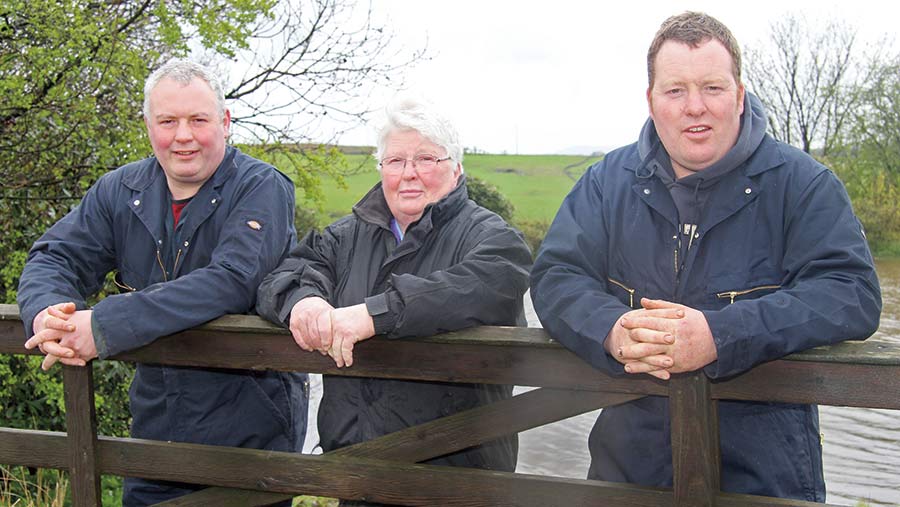 The Harvey family will be hoping it’s third time lucky for their top production herd of all-year-round calving Holsteins.

They topped NMR’s list of Holstein production herds in the 2017 Annual Production Report and have remained in the top three for three out of the past five years.

John Harvey says their success is merely a side-effect of managing the herd as well as they possibly can and always looking to improve. “We are very driven – we’re not for sitting back when things are going well. We always want to do things better.”

The herd is permanently housed except for one group, of around 100 mid-lactation cows, which is turned out to graze at the end of May, if conditions are suitable. The unit’s 260 head of young stock also graze during the summer.

They are fed a TMR and individual cows are topped up to yield through the parlour.

Cow health is important to the team and 18 months ago they began using mastitis vaccine to prevent E coli mastitis in the herd. Rates have now dropped from 20% to below 10%.

This, alongside strategic use of dry cow therapy on 85% of the herd, is helping cut antibiotic use. 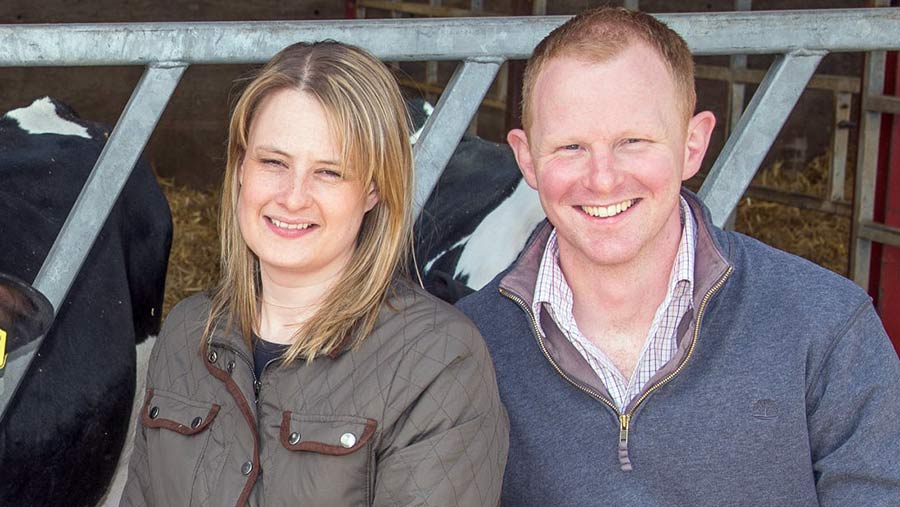 This is the fourth time the Tomlinsons’ 270-cow pedigree Bilsrow herd has made the Gold Cup final.

There have been several changes at Bilsborrow Hall Farm in the past year, including buying more land, registering the business as a limited company, and officially becoming a “free-range milk” producer.

“The cows now graze for a minimum of 150 days a year – from early May to mid-October – to meet our milk buyer’s ‘free range’ criteria and command a premium,” James says.

James was attracted to Pakeeza for the milk price premium, of course, but it has meant that keeping a closer eye on fertility was vital. “We stepped up our management – particularly heat detection – to ensure that even though the cows are grazing for longer that we wouldn’t miss any. And we’ve maintained, if not slightly improved, the fertility performance,” he says.

The Tomlinsons are also selling more freshly calved heifers – about 100 head a year, which is 30% more than in 2017. This is the result of using more sexed semen – it’s now used across all maiden heifers.

The future will see the couple invest in a new milking parlour and slurry handling system – they are the factors limiting any significant expansion at the moment.