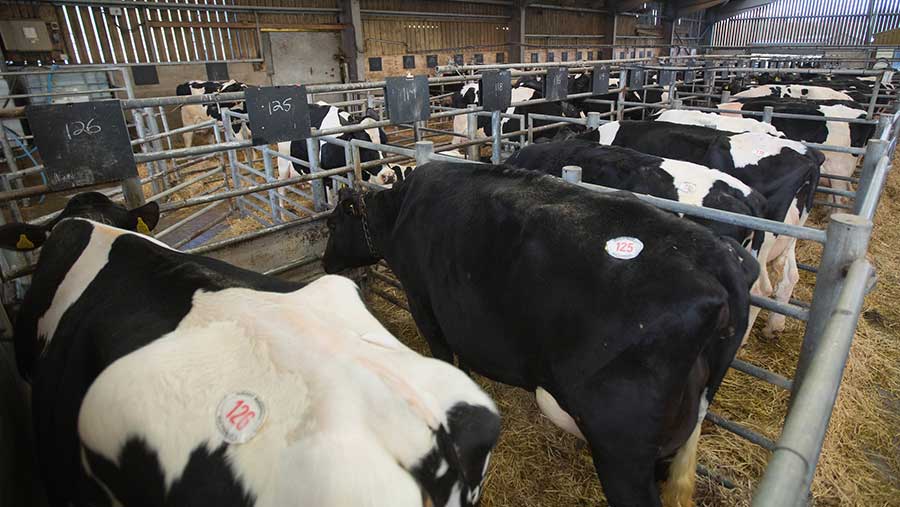 A combination of European genetics coming into the UK market and talk of processor price cuts has deflated milker values this spring.

Strong cull cow values are supporting heifer and cow trade, however, which remains about 50% up on the year, according to auctioneers Glyn Lucas, Harrison and Hetherington, and Ian Atikinson, North West Auctions.

“Two cull cows are buying your quality heifer at the moment,” said Mr Lucas, who is expecting dairy cow prices to strengthen through 2017.

“Average Holstein culls are about £800 and with prices up on the year the premium for the quality is back, although there’s no real pattern to trade at the minute.”

He added a Dutch influx of cattle and consignments from Germany and France could put a bottom in the UK market.

He said supplies of UK cattle were, to an extent, showing signs of the dairy downturn and the extensive amounts of beef semen used.

Cull values are helping dairy heifer prices in Lancaster, with Mr Atkinson reporting prices of £500-£600 for leaner sorts with better-fleshed animals averaging £800 and some flying into four figures.

“Through the new year confidence improved with milk prices and people were looking for 30-litres-plus heifers,” he told Farmers Weekly.

“However, confidence seems to be going a little with talk of processors dropping summer milk prices.”

He expects throughput to lift at Lancaster at the mid-May sale as more breeders in his area are calving now lambing is out of the way.

In keeping with AHDB figures, he said culls were 20-25p/kg up on the year, with great demand for barren cows.

On the milk side, Mr Atkinson explained a large amount of Dutch heifers are coming on to the market due to environment restrictions on phosphates and many farms having to dramatically reduce numbers.

A steady trade and smaller yarding of 25 Ayrshires was reported by Mark Davis of Kivells at Exeter on Friday (28 April).

Several big vendors were under TB restrictions, meaning grazing cattle cross-breds led the sale, topping at £1,580 for a smart British Friesian heifer with Fleckviehs and Norwegian Reds at £1,400.

“The prices were very similar to the recent commercial offerings we’ve been having on the Ayrshire front,” Mr Davis told Farmers Weekly.

“Meanwhile the cross-bred types that suit the grazing systems continue to be a strong trade.”

“South of the border in the republic people aren’t buying cows like they are in the North,” he said. “Prices are £200 a head down here.”

He added a strong supply of cattle was affecting trade, along with fluctuations in currency and the impact it had on cross-border buying.

“On the plus side, it has been a good spring to turn cows out. One of our best sales in the Republic recently followed a big Brexit announcement that resulted in a stronger pound.”