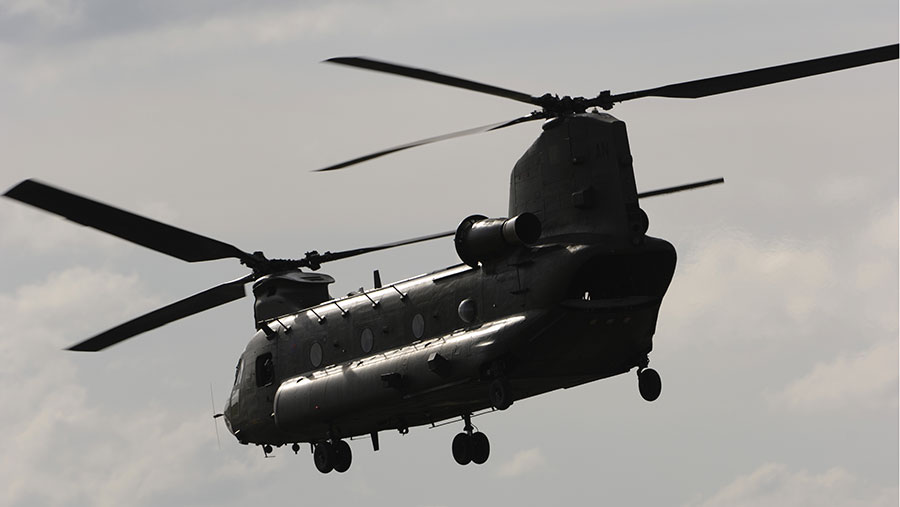 The Ministry of Defence (MoD) has paid nearly £2m to the UK farming industry because of distress caused to livestock by low-flying jets or helicopters.

Over the past four years, claims have been made by poultry, pig and beef farmers and horse owners after their animals were panicked.

For the poultry sector, there were 22 payments over this period, totalling £240,000, from farmers who claimed their birds had stopped laying eggs or had been trampled death.

The biggest payout of £79,041 was made to a poultry farmer in East Sussex after noise from a Chinook sparked panic in a chicken house leading to hundreds of deaths.

A poultry farmer in Cheshire was compensated for £23,356 for loss of egg production after a Squirrel helicopter flew overhead.

A spokesman for the British Egg Industry Council told the Times: “Low-flying aircraft can cause the birds to ‘smother’ in a panic reaction.

“Smothering is when the hens all pile on top of each other, sometimes against an obstacle such as a wall. The ones at the bottom suffocate. Many hundreds of birds can be lost in this way.

“The other possible effect on hens from stress is that they go out of egg production and the eggs the hens do produce are often poorly shelled and not fit for the table market.”

Meanwhile, a livestock farmer in County Tyrone, Northern Ireland, was compensated for £42,700 after cows died from shock after they were scared by a Chinook helicopter.

An MoD spokesman said: “Low flying is an essential part of operational military training. The MoD understands it can be noisy and unpopular but strives to ensure that any disturbance is kept to an absolute minimum and spread as evenly as possible throughout the UK.

“The MoD will pay fair and reasonable compensation when the essential link between the presence of low-flying military aircraft and an incident has been established.”