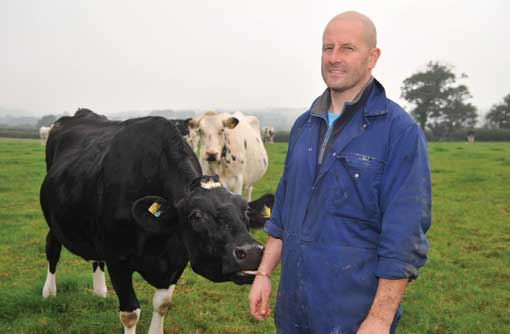 Although Lloyd Thomas’ pedigree Holstein cows appeared to cleanse properly after calving, two-week post-calving health checks at times revealed that some were not clean. There was also a degree of metabolic disorders in the herd.

Through his project work as a Farming Connect Demonstration Farm and on the advice of his vet, David Staak, from Market Hall Vets, St Clears, Mr Thomas took the opportunity to blood profile the herd in an attempt to identify the problem.

Samples were taken from five cows 10 days before their due calving date; five cows that had calved between 10 and 20 days earlier; and a further five that were 100 days into their lactation. The condition scores of the animals were also noted.

The samples were analysed at Edinburgh University for energy status, protein balance and mineral, trace element and vitamin levels.

The results showed that cows that had been in milk for 100 days were energy positive. However, what the tests did confirm was a negative energy balance in the fresh calvers, originating from the dry cow diet, and this was causing the animals to mobilise body fat.

This was impacting on cow health, production and fertility. The tests also showed raised butyrates and high non-esterified fatty acids (NEFA) in the fresh calvers.

One of the biggest changes the Thomas’ have made to the system as a direct result of the profiling has been to alter the type of silage they produce.

Although there is still an emphasis on producing high-quality silage for the milking herd, the dry cows are now fed a haylage produced from older leys.

“The quality of the silage in the dry cow ration was too good and there was insufficient fibre in the diet to stimulate the rumen. The intakes didn’t match the needs of the cows and this was creating the problems,” said Mr Thomas, who farms with his wife, Laura, and parents, Neville and Margaret.

This year 1,000 big bales of hay-type silage were made from older leys on rented land. “These leys are quite stemmy – they don’t have much leaf. It is a more natural product for stimulating and filling the rumen,” says Mr Thomas.

The grass was turned twice during a five-day period before it was baled and wrapped. This feed is used instead of straw in the dry cow ration. “I find that it is a cheaper way of getting fibre into the dry cows than purchasing straw,” says Mr Thomas.

The silages fed across the herd is analysed by nutritionist, Dorian Griffiths, of Cowindale Feeds, and Mr Thomas keeps a daily diary to monitor what the cows are eating.

He has also increased the amount and quality of protein given to the dry cows to increase their ERDP. Molasses and some water have been added to their diet too to increase palatability and intakes.

Molasses was added to the milking cow ration to increase energy in the diet.

Managing these intakes was straightforward because the fresh cows were already in a separate group for a period of three weeks to help with their dry matter and energy intake and to help them acclimatise to their new ration.

A major overall benefit of changes to the diets has been a reduction in the calving index from 412 days to 396 days. And cows are hitting peak lactation earlier.

Metabolic issues post-calving have reduced significantly. “We only had one cow with a displaced abomasum last winter,” says Mr Thomas. “We are also seeing far fewer cows with milk fever.”

The herd has been analysed twice so far and the general recommendation is that samples should be taken four times a year.

At around £200 for each set of samples together with vet fees blood profiling is not cheap, but Mr Staak says the benefits for herds can be huge. “It is a very beneficial service when you consider the enormous impact that the diet has on health, productivity and fertility of the cows,” he says.

“Profiling highlights a problem immediately and gives you the information to address it straight away rather than letting two or three months pass before the problem comes through the system.”