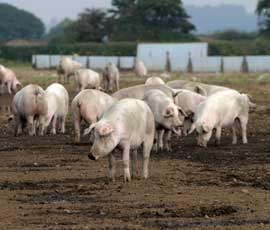 Now is the time to invest in a knapsack sprayer and get on top of weed growth around pig buildings, says BPEX regional health co-ordinator Patrick McDonnell.

“Overgrown weeds on a pig unit can provide a safe environment and potential breeding site for rodents. Check the legislative requirements relating to the safe use of pesticides and knapsack spraying and, for more information on rodent control, order a rodent control pack from BPEX.”

If you are using a spring block system, now is the time to check if your bulls are up to the job, says Nicky Fair, extension officer for DairyCo.

“Give them a good look over and check they haven’t developed any problems since they were last used.”

If the bull has swellings, lumps or smaller testicles than usual these can be signs of a problem. Lameness is also a big issue – not only will it make them less able to work, it will also have direct effect on the bull’s fertility.

If you are bringing in a new bull to the herd, vaccinate him for any diseases that are circulating on your farm. If he comes down with something such as IBR when he is introduced to the cows this will seriously affect his fertility.

Also consider if you have enough bull power. With the poor spring there may be a slower start to the breeding season. This could mean that more cows than usual are left for the sweeper bull at the end of the AI period. The usual recommendation is one mature bull to about 30 cows, so if you are asking him to “sweep up” more cows than this it may well be too much for one bull.

Effective worm control in cattle grazing contaminated pastures relies on dosing at the recommended rate and not underestimating weights, according to Mary Vickers of EBLEX.

“Dairy calves and autumn-born suckled calves require an early season worming treatment in their first grazing season unless they are on safe grazing,” she says.

“Spring-born suckled calves will not usually need preventative treatment for gut worms in their first grazing season (apart from a housing dose), but they will probably need some control in their second grazing season.”

Swabbing clean pig pens for bacteria is a great way to see whether improvements to the cleaning routine are needed.

BPEX regional health co-ordinator Louise Wall is visiting pig farms around the country to analyse clean pig pens. “It’s important to ensure a bug-free environment, as far as possible, when you introduce new pigs,” she says.

The Recommended Grass and Clover Lists (RGCL) for 2013 have just been published and EBLEX’s Dr Liz Genever is urging all grassland producers to take advantage of them.

“Knowing the performance characteristics of grass and clover is immensely useful, as it allows producers to select varieties that will perform well for a particular system and end use,” she says.

“The lists, which include eight new varieties, are drawn up after rigorous testing for a wide range of attributes including yield, persistency, quality and disease resistance.”

The 2013 RGCL can be downloaded from the publications section of the EBLEX website.

“There should be minimal variation in condition throughout a sow’s productive life and producers should aim for an optimal average condition score of 3 (on a scale of 1 to 5) throughout the breeding herd.”

Score sows at key times in the reproductive cycle and always score the sows by touch, using the palm of the hand, as it is more accurate than just scoring by eye.

For more information on the Breed+3 initiative and to download the factsheet,

Action for Productivity 20: Condition scoring of sows, go to the BPEX website.