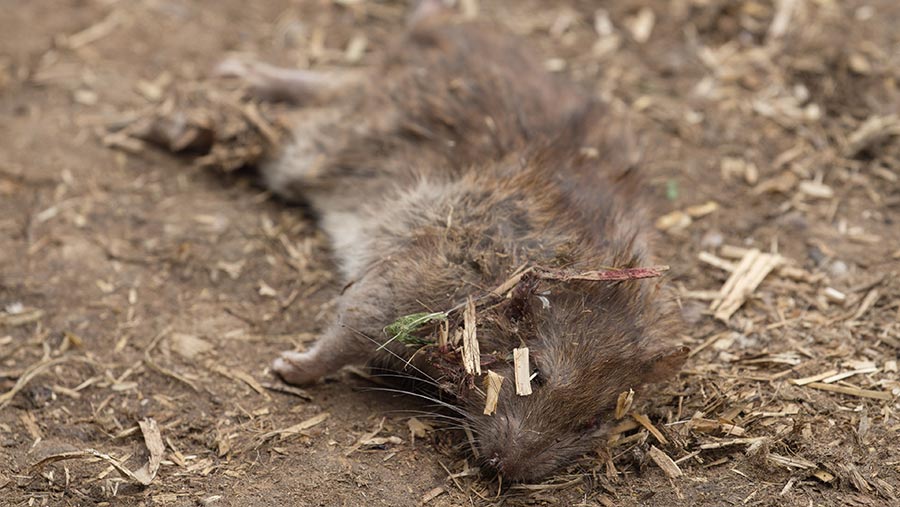 A rodenticide with a different mode of action to first- and second-generation anticoagulants is now available for use on farms in the UK.

The new bait has proved effective in controlling infestations of “super-rats” – rodents unaffected by anticoagulants – according to manufacturer BASF, breaking the cycle of resistance that is making control difficult in some parts of the country.

“Selontra is not an anticoagulant,” explains the company’s global technical marketing manager, Sharon Hughes. “The active ingredient is cholecalciferol, which causes death from hypercalcaemia.”

Cholecalciferol, or vitamin D3, helps the body absorb calcium. Ingested in bait form, however, it is toxic to rats.

The effect is rapid: rats stop eating the bait and any other food sources after 24 hours and die within two to five days.

This limits the amount of bait consumed, avoiding wastage and preventing further contamination and spread of disease.

But it means sufficient bait must be placed to ensure the rodents consume a lethal dose within the first 24 hours of exposure.

To be effective, any bait must also be palatable and compete with other sources of food. In comparison studies, rats ate 13.2 times more Selontra than maize silage, and 4.3 times more of the bait than pig feed, on the first day of treatment.

“Selontra is a soft block, bound together with vegetable oil, which is much more palatable than the usual wax,” says Mrs Hughes.

“Almost 99% of the ingredients are foods recognised by rodents.”

Unlike anticoagulants, which build up in food chains, cholecalciferol is not bioaccumulative and does not persist in the environment.

Studies on quail and mallard showed they were about 50 times less sensitive to it than rats and mice.

“[Because] Selontra works by the rodent having too much calcium in the blood, this means fewer, less harmful residues, which will help to minimise the risk to non-target species,” says BASF’s key account manager, Helen Ainsworth.

To deal with infestations quickly, a “speed-baiting” procedure is advised:

This can result in full control of the infestation in seven days, according to BASF.

It is important to clear the site of any rubbish before bait points are placed.

Because rats are neophobic – they don’t like new things in their environment – bait points should be left empty for a week before filling with bait to increase the likelihood of them being accepted as part of the rats’ habitat.

BASF has produced a 30-minute training programme for Selontra, which is registered for continuing professional development (CPD) schemes with the British Pest Control Association (BPCA) and Basis.

Sharon Hughes and Helen Ainsworth were speaking at the launch of Selontra on 20 April. Selontra is available to United Farmers members or from Killgerm, Hutchinsons and BASF Pest Control.

Rodenticides based on cholecalciferol are subject to conditions of the UK rodenticide stewardship scheme operated by the Campaign for Responsible Rodenticide Use (CRRU).

There are three ways farmers can use them:

1. They must be members of a CRRU stewardship-approved farm assurance scheme such as Red Tractor, Quality Meat Scotland, Farm Assured Welsh Livestock and Northern Ireland Farm Quality Assurance Scheme
2. They must have undergone training – go to the Think Wildlife website for list of courses
3. Or a qualified pest control contractor can be employed – see the register of wildlife-aware accredited technicians [PDF]

The only other option is to use products permitted for amateur use.