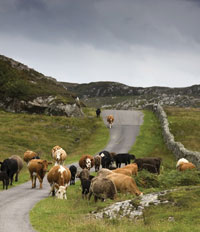 NFU Scotland has condemned anyone importing stock from high risk bluetongue areas as ‘selfish’, following reports that some cattle from Belgium will shortly be arriving in the North of England.

The union was responding to rumours that cattle are destined for farms close to the Scottish border. Any such imports would fly in the face of the voluntary ban supported by all major producer groups in GB.

NFU Scotland has asked the Scottish Government to confirm with its English counterparts whether importation is under way and it calls on all GB organisations to again urge their members to support the country’s voluntary ban on imports.

NFU president Jim McLaren said: “Bluetongue still poses the biggest animal health threat to GB’s cattle and sheep sectors. All GB farming unions, along with NSA Scotland, NBA Scotland and the Scottish Beef Cattle Association have united behind a voluntary ban on imports coming into the country until such times as all strains of the deadly Bluetongue disease are seen to be under control in Northern Europe.

“Despite this, it appears that there are some so selfish that they would continue with importation of stock from high risk areas with little or no concern for the thoughts, wishes and livelihoods of their near neighbours or the future of the wider industry.

“The last year has shown us that the testing regime used in Europe does not work, and that there have now been more than 50 animals imported into England and Wales that left their country of birth guaranteed free of disease but tested positive for the virus when they arrived on these shores.  The potential threat posed by these latest imports is no different.