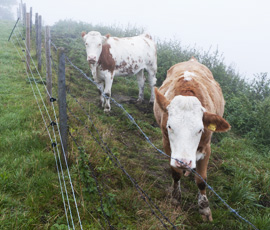 An investigation is underway after nine cows drowned in the sea in Carmarthenshire.

The cows were among a herd of 30 belonging to a farmer in Pembrey, which had broken out of a field last weekend through damaged fencing.

They were cut off by an incoming tide at Cefn Sidan beach yesterday morning (April 25th) and nine of them drowned.

Police are investigating claims that the cows had escaped after fencing was damaged by dog walkers.

Police and fire crews together with Millennium Coastal Park rangers rescued the surviving cows during a four-hour operation.

Thermal blankets were used to cover the cows to protecting them from a cold wind.

Tracks in the sand showed the cows had wandered along seven miles of Cefn Sidan inside the dune line before being washed off its end.