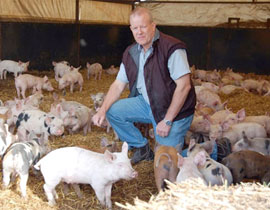 Yorkshire pig producer Richard Longthorp has been announced as the new chairman of the National Pig Association (NPA).

Mr Longthorp, who is taking over the role from long-serving chairman, Stewart Houston, is a pig producer from the east Riding of Yorkshire.

Zoe Davies, general manager of the NPA, said: “We are absolutely delighted that Richard has become the new NPA chairman.

“He has long been a great supporter of the association, including having already held the position of chairman once before.

“We are very lucky that someone with such experience is able to take over the helm from Stewart and we are really looking forward to working with him.”

Mr Longthorp, is the chairman of the Pig Industry Training Strategy Implementation Group, the AgriSkills Strategy Group, and a BPEX board member.

He was previously a chairman of the NPA and a member of the NPA Producers Group. A former David Black Award winner, he was awarded an OBE for services to the farming industry in January 2011.

Mr Houston had been chairman of the organisation for nine years, but he will remains on the main board as well as the NPA Producer Group. He did not seek re-election in deference to concerns voiced by the NPA about his dual role as chairman of both the NPA and Bpex.