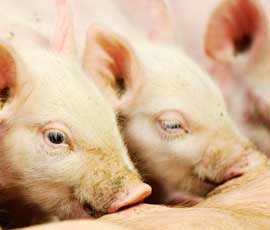 Pig producers will press their case for legal action to be taken against European countries that continue to use sow stalls.

An estimated 80% of European pork fails to comply with animal welfare rules that saw a ban on sow stalls come into effect on 1 January – bringing the rest of the Continent into line with the UK, where sow stalls have been banned since 1999.

“Some 60% of the pork consumed in the UK is foreign – it is not from the UK,” said Zoe Davies, general manager of the National Pig Association (NPA). “Because of that, we are constantly being flooded by cheap imports from Europe.”

An NPA delegation will discuss the issue with European Commission officials on Monday (28 January) ahead of a European Farm Council meeting in Brussels. “We will be asking a lot of very difficult questions,” Ms Davies told NFU council.

The NPA has also launched a website Hall of Fame (and Shame) to show which pork retailers and processors have signed a Pork Pledge to buy only pigmeat produced using systems that conform with the European sow stall ban.

“The pledge states that they are confident their sourcing policies are robust enough that they comply with the welfare of pigs legislation,” said Ms Davies. “We will be listing them on our website so consumers can see who is and who isn’t able to say they are abiding with the rules.”

Cheap imports entering the UK include pork loins from Belgium. Other parts of the pig carcase are generally worth more in Europe, but the UK remains a loin-driven market. This means imported loins command a better price here than in Europe but still undercut British farmers.

More on the outlook for pig industry