Continuing low industry prices for finished cattle, and Brexit, didn’t deter some buyers at the Limousin Cattle Society autumn show and sale at Carlisle on Saturday 19 October, which saw prices top 40,000gns pushing averages up more than £200 on the year.

Nine bulls made five figure sums compared to 13 at last year’s sale, which also saw more numbers sold at 118 head and a better clearance rate of 83%, compared to only 64% for the 83 sold this year.

Commenting on the sale, Limousin Breed Society interim breed secretary Richard Saunders said: “It was overall a good trade for Limousin bulls into commercial herds with the market for Limousin stores this autumn holding up pretty well. This was reflected here with a decent demand for bulls with shape and performance heading to predominantly commercial buyers.”

At the pre-sale show, judge John Lynch of Dovea Genetics, Republic of Ireland, described him as a “stand-out bull, functionally correct and with a super body and back end”.

He was purchased in a three-way split by Messrs Goldie, of the Goldie herd, Dumfries; Messrs Adam and Son, of the Newhouse herd, Forfar, Angus; and Messrs Burnett and Sons, of the Spittalton herd, Blairdrummond, Stirling.

The purchasers said Opportunity had “size, shape and good locomotion for such a powerful bull”. 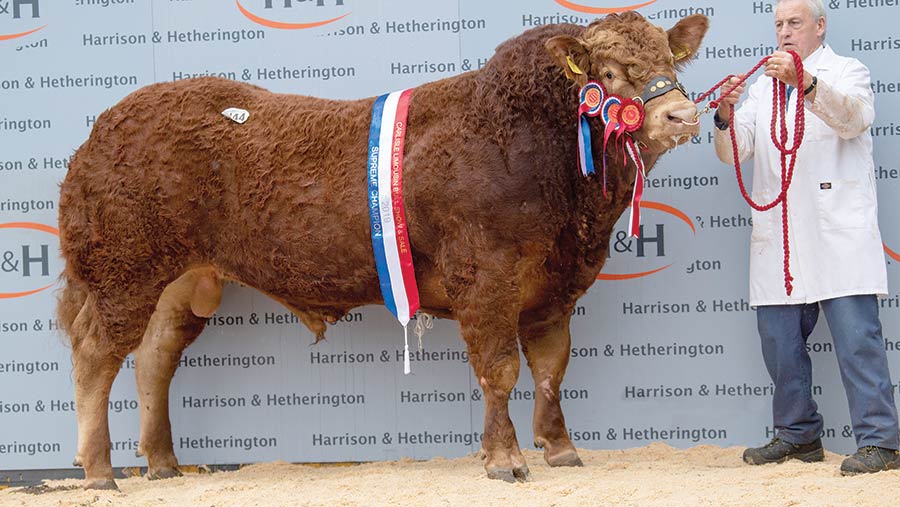 Next in the money, at 26,000gns, was April 2018-born Foxhillfarm Ourbest, from Michael and Melanie Alford, of the Foxhillfarm herd, Devon.

By Foxhillfarm Lordofthering, and out of Corranhill Krystal by the Sympa son Haltcliffe Dancer, Ourbest was a first-prize-winning bull from the intermediate section. He was snapped up by Gordon Cameron, Newton Cottage, Argyll, for his commercial herd. 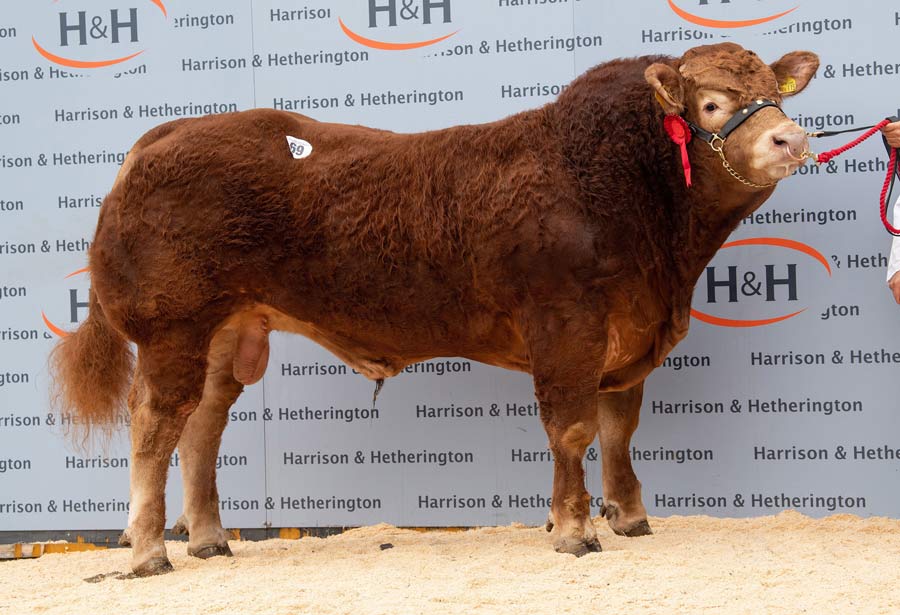 He was knocked down at 12,000gns to Donal Moloney, Ardnacrusha, Republic of Ireland. An April 2018-born embryo calf, he is by Trueman Jagger and out of Calogale Izzy.

The third leading price of 11,500gns went to Ian Nimmo, Bogside Farm, Newmains, New Lanarkshire, for Maraiscote Oxford – a bull with top 1% growth traits, who stood second in his class to the intermediate champion.

He is the first son offered at auction by the 50,000gns Bassingfield Machoman, and is out of the Goldies Comet daughter, Maraiscote Holdon. This bull was bought by Farmers Weekly’s Farmer of the Year 2017 and commercial producer Robert Neill and Partners, Upper Nisbet Farm, Jedburgh, Roxburghshire. 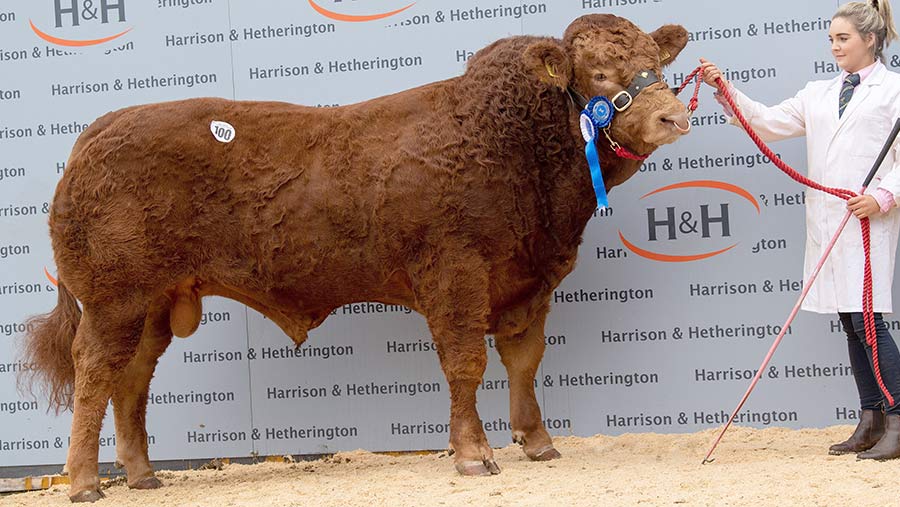 Another red rosette winner from the intermediate classes, and with a successful summer show season behind him, he is one of the first sons offered for sale by the herd’s stock bull, Gunnerfleet Lion, and is out of Whinfellpark Elite, by Wilodge Cerberus. 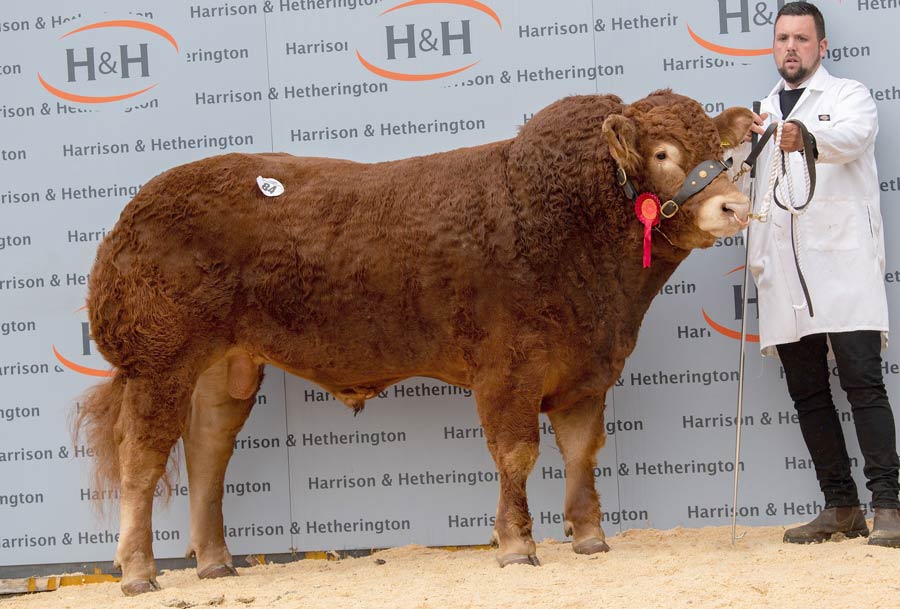 Having won the penultimate junior class, this June 2018-born youngster is an AI son of Uptonley Livingthedream and out of Brontemoor Juicycouture by Goldies Comet. He sold with a Beef Value in the top 1%. 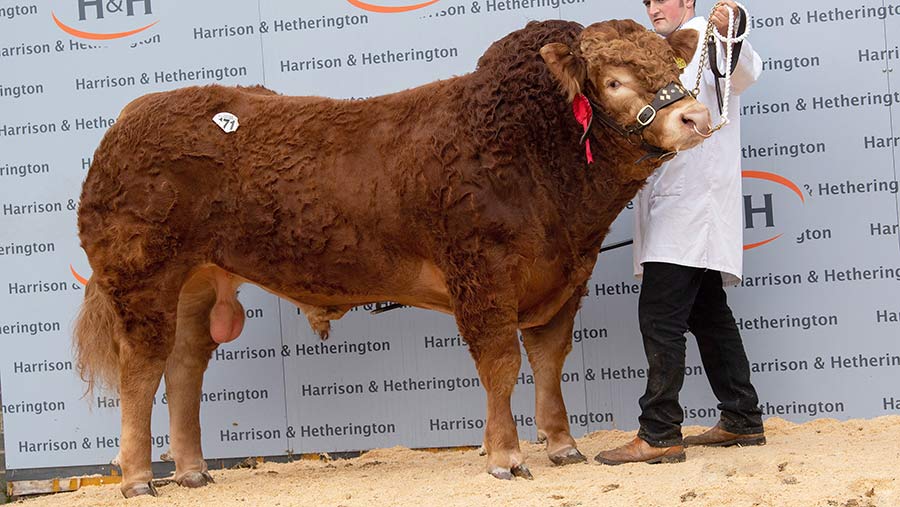 Senior champion and reserve overall was the 10,500gns Barrons Oslo, brought out by Willie Barron, Morrow Edge Farm, County Durham. Sired by the Lowerffrydd Empire son, Homebyres Jamie, and out of Barrons Icho (by Wilodge Cerberus), he heads to CV and E Lewis, Welshpool, for their Garyvaughan prefix. 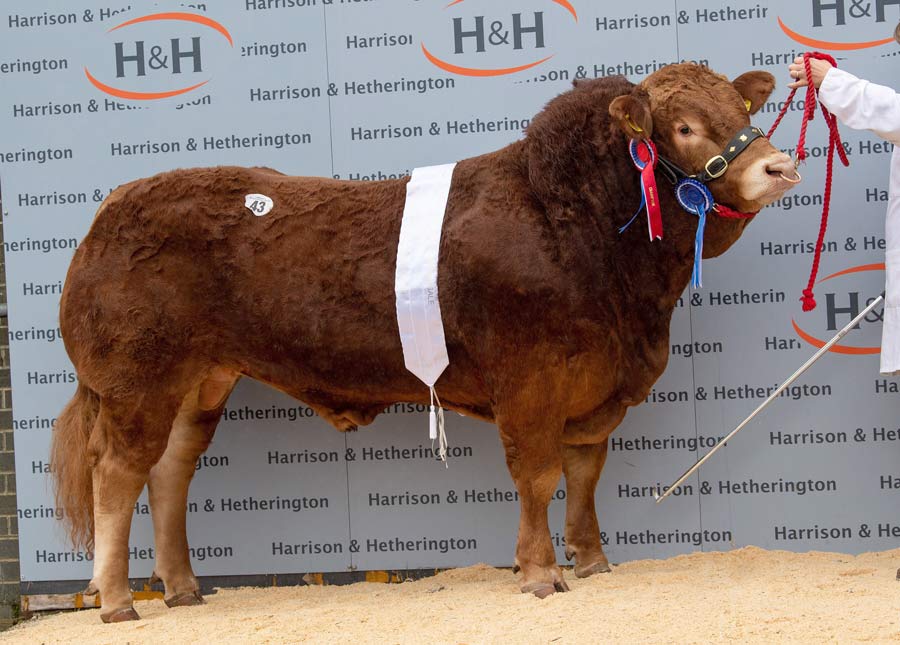 From the same junior class as both the junior champion and reserve came the 10,000gns Cairness Onside, from William and David Moir, Home Farm, Fraserburgh, Aberdeenshire. Sired by the Wilodge Vantastic son, Goldies Goldfinger, and out of Knock Ingrid, this black-coated bull sold to W Walker and Son, Camregan, Girvan, Ayrshire.

Giving the same money were A Bunting and Son, Midtown Farm, Dumfries, for McParlands Ozzy from MacParlim Genetics, Newry, County Armagh. By Ampertaine Gigolo, this second prize-winner is out of the Plumtree Deus daughter, Dyfri Judith.