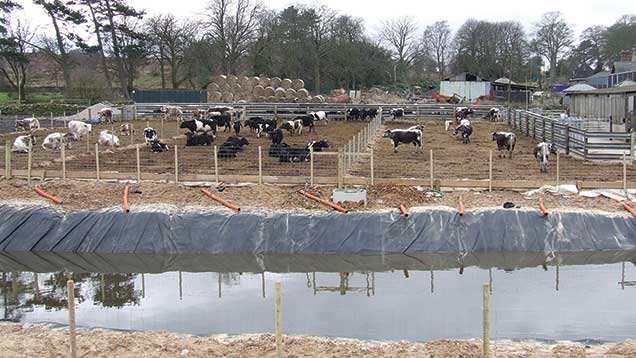 Healthier cattle and a lower-cost housing system are two reasons why outdoor corrals are proving a big success.

And at a cost of £550 a cow, the straw corral constructed at Cinquecliffe Grange, Thirlby, North Yorkshire, was about half the price of building a conventional beef finishing shed.

Woodchip used to be the bedding of choice, but recently the switch has been made to straw, explains farm manager Chris Coldbeck.

“The cost of the woodchip was increasing and the large chunks of wood in the mix made cattle reluctant to lie on it. We’ve switched to straw, which is costing less and is more comfortable. We’re using a straw chopper and putting two square bales in every other day,” he says.

All calves are moved into the corral system at weaning in October/November and finished on a TMR diet. January-born cattle from last year’s calving have just been sold weighing about 560-600kg.

The corral system was installed in 2009. There are four pens – two for heifers and two for steers – each measuring 16x30m and carrying 50 head. Space allocation 11sq m a head.

Crash barriers provide the perimeter penning and a geo-textile membrane was laid on top of the earth base. Water drains from underneath the corral pens into a holding tank before being pumped away.

When the woodchip was removed, prior to the new straw system, a layer of stone was laid on top of the membrane. Cattle also have access to a covered straw-yard area.

“The corrals are on a slight slope and drain well. Although cattle can run back into the cover of the building if they want, we find they prefer to lie outside; even at night they are outside rather than inside the building, but I think it’s important to provide some shelter.

“We’ve only had one case of pneumonia this year,” he says.

Animals are also performing well, with Mr Coldbeck getting finished cattle away at 12 months old. But he says he wouldn’t go back to woodchip.

”We did try using smaller chips as a topping but it just turned to mush.

“The cattle are a lot cleaner on straw and certainly aren’t eating more feed just because they are outside.”

Seek professional advice at an early stage to meet all regulatory requirements and minimise risks of pad failure and/or environmental problems.

Locate pad away from public view. A gently sloping, south-facing site is ideal, with easy access to off-pad area where stock can go if necessary.

Site pad at least 50m away from a watercourse or ditch and avoid sensitive groundwater areas.

Perforated plastic piping is recommended for drainage. External access to the pipes via capped extensions allows easy access for jetting and clearance of blockages.

Estimate effluent volume, taking pad area, rainfall and animal numbers into account. Allow for the amount absorbed by the woodchip and lost to the air.

Use coarse chips (fist size >5-10cm) to encourage rapid drainage and a clean pad surface. However, finer chips (<1-2cm) are better for animal welfare and retain more slurry solids. Compromise with a 30cm base layer of coarse chip, with a 20cm surface layer of fine chip, which will need removing at least once a year.

Active management is essential. Heavy soiling of the surface chip can occur in dry or freezing conditions when followed by wet weather.

Remove heavily soiled chip and replace with a few centimetres of clean chip.

Close off the affected pad area when removing woodchip, avoiding the need to remove stock completely. Use of cultivators has met with little practical success. Physical removal of the affected layers and replacement with clean chip is best.

9. Application of dirty woodchip to grassland

Apply dirty woodchip to grassland direct to make best use of available N content. Fine chip is incorporated into the topsoil within a few weeks. Coarse chip persists and is not suitable for spreading on the surface.

Locate feed fences and water troughs outside the pad area. The concrete feed stance should have sufficient area to accommodate all animals at once.

A raised kerb at the base of the feed barrier prevents contamination of the feed with slurry. Bury water pipes and protect against frost.