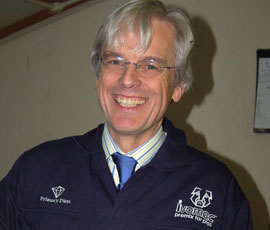 Nutritionist Paul Toplis has been awarded the prestigious David Black Award, for his services to the pig industry.

Mr Toplis, technical director of Primary Diets, was given the accolade at a special BPEX breakfast, hosted by Lord Palmer in the House of Lords.

Accepting the award, presented to him by agriculture minister Jim Paice MP, he said: “I do feel strongly that this is a contribution to the feed industry which is being recognised today.

“One of the problems we have is the supply of ingredients to the European livestock sector, as we fail to adapt to GM crops. We know that Processed Animal Proteins are unacceptable to UK consumers, so the feed industry will honour the call for its ban to say in place.”

He called on the EU for more funding for animal health and nutrition, and praised the work of RUMA (Responsible Use of Medicines in Agriculture Alliance).

“Food security, animal health and welfare have been well served by this initiative, despite getting very little funding at all.”

He said the industry needed to work together on issues such as salmonella and antimicrobial resistance.

“The question of whether traces of antibiotics in feed contribute to antimicrobial resistance (AMR) is a controversial one and there probably isn’t an answer, but we must be guided by the very best science available.

“That may well end up saying there’s no (AMR) problem with the majority of in-feed antimicrobials but we’re not so sure about these few. With co-operation across the EU, I’m sure science and sense will prevail.”