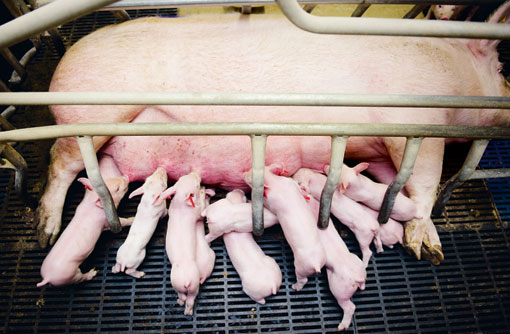 The huge genetic progress seen in the pig industry looks set to continue well into the future.

Genetics have massively influenced pig production in the past 50 years and there is no limit to the scope for making this animal more efficient.

According to pig scientist Stephen Waite, genetic selection has maintained year-on-year growth in the industry and the next five decades will be no different.

“There will be a large push to make pigs incredibly efficient. Because of population growth, we will have to produce the same volume of food in the next 50 years as we have produced in the past 10,000 years. We have got to create an animal capable of delivering that,” he says.

Huge progress has been made since the 1960s, when the average sow produced 14 more pigs than her predecessor. The number of weaned pigs a sow averaged 14, but that figure now stands at 28 – an increase of 100%.

Lean percentages and feed conversion rates have both seen significant improvements, too. The lean percentage of the modern pig is 55 compared to 40.

With 11.25kg more lean meat a slaughter pig, that represents an improvement of 62%.

Natural selection and the survival of the fittest have played a part in pig rearing, particularly in the period before commercial selection became commonplace. It accentuates useful traits such as the number of piglets born alive and mothering ability.

But genetic improvement through controlled breeding, together with breeding from the best animals, has been key, says Mr Waite, head of science at JSR Genetics.

Genetic improvement has been successful because it is cumulative, permanent and sustainable. It can be measured and therefore progress is ongoing. “It is essentially the backbone of the pig industry and it will keep the industry growing,” he says.

“Breeding from the best is what delivers progression. By picking out the variances we want to express on the rest of the population there is no limit to how much progress can be made.

“We often quote the Illinois long-term selection experiment for oil and protein in corn. This project has been in place for 112 years and each year there has been an improvement.”

Selection by pig geneticists has traditionally focused on traits relatively easy to measure on the live animal, such as growth rate.

Such improvements have benefited producers but packers and retailers have also been keen to see improvements in the qualities that affect the economics of their businesses.

The development of CT scanning has facilitated an accurate prediction of the carcass composition, while muscle yield within the different primal cuts can be differentiated.

Although originally created to benefit human medicine, CT scanning has developed as a useful tool for the pig industry, too.

“Scanning allows us to measure fat, muscle and skeletal levels in live pigs and also the fat value within that muscle. There have been real advancements in this technology,” says Mr Waite.

Genomic selection is also used to improve populations for traits too costly to be recorded routinely. It is used to increase the accuracy of the estimated breeding values and to select the nucleus populations.

Genomic selection in pigs is costly but breeding companies sharing reference populations have reduced the costs.

“Genomic tests are used across populations to look at specific genes that control traits such as E coli resistance to improve the health and vitality of the species. With the advancement of this technology we can come close to having a drug-free pig,” Mr Waite predicts.

Collaboration between breeding companies, the technology sector and research institutes has also made progress possible.

A partnership approach to sharing ideas has developed a good cross-section of expertise. In the 1960s, funding for research was very limited; only in recent years has more funding become available for research.

“Research programmes can attract funding upwards of £10m, whereas not many years ago the funding on offer was far smaller. You can start to make big advancements with that level of funding,” says Mr Waite.

Advancements have also been made by breeding companies having access to global populations of animals through links with companies overseas, such as in China and Russia.

“It means we can make selections across millions of pigs. For example, if we wanted to develop a fast-growing pig, we could look across the market to see which particular pigs were suitable for this,” he adds.

The biggest challenge for the pig industry is producing products to suit individual markets. In the poultry industry, where the main market requirements are for breast yield, a single animal can satisfy all markets.

“In the UK, the loin is the most important cut on a pig and the belly is a throwaway cut, whereas in Asia the opposite is true. We have to produce different slaughter products to suit the UK, Asia and South America – we can’t have a single product.”

Cross-breeding has also been successful. Breeds with desirable qualities have been combined to boost performance and to deliver benefits in reproduction, disease resistance and growth.

“We have used heterosis to its maximum benefit in the pig industry by crossing two lines of female breeding and crossing this with a terminal sire. With each progression we are making the most of heterosis,” Mr Waite explains.

Mr Waite predicts that genetic progress will deliver major improvements in the next 50 years. Pigs weaned a sow will grow from 28 to 35 and the lean percentage will rise from 55 to 62.2.

He expects the feed conversion rate to decrease from an average of 2.2 to 1.9 and the lean percentage achieved from a tonne of feed to rise from 170 to 234.

But improvements haven’t all been down to genetic progress. Skilled staff are also key to maximising production potential.

“Very good stockpeople will give you a good farm but unskilled staff will deliver poor results,” says Mr Waite. “Stock management is no longer a simple job; these days a stockperson needs to have good technical knowledge.”

The pig environment is also crucial, and for most traits, improving the environment can provide up to 50 years worth of genetic progress.

“The environment pigs grow up in is incredibly important,” he says. “We use the analogy of a Bugatti Veyron being driven down a farm lane. It will never achieve its top speed in this environment, and neither will a pig achieve its full potential in poor farm buildings.”

He cites this as the main reason for the gap between the best pigs and the rest. “Some people might have the best genetics, but are not putting the pigs through the best system,” he adds.

In recent years there has been a radical change in the mindset of key players in the British pig industry towards health and welfare and this has impacted positively on growth.

With support from organisations such as BPEX, pig producers have been able to control significant infections such as salmonella. The responsible and appropriate use of antimicrobials has also been encouraged.

The 20:20 Pig Health and Welfare initiative alone is believed to have been responsible for additional daily weight gains of 50g.

In summary, the pig industry is barely recognisable from the one that existed 50 years ago. And if advancements continue at their current pace, there is no ceiling to the progress that could be made in the next 50 years.