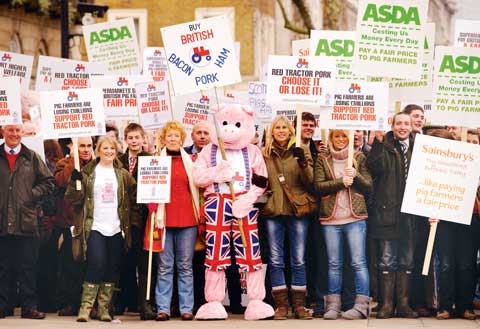 A year after farmers protested in London over the dire state of the pig industry, have things improved for producers, or are they one step closer to the brink of collapse? Caroline Stocks reports.

On a cold day in March last year, more than 200 pig farmers and their families lined up outside Downing Street, intent on being heard by politicians and retailers alike.

Parading a giant, floating fake sausage on a trolley while singing “Stand by Your Ham” to the tune of Tammy Wynette’s “Stand by Your Man”, it was a light-hearted protest, but one with a serious message: the UK’s pig industry was in crisis.

Soaring feed costs, poor supermarket prices and cheap imports meant producers were being forced out of business at an alarming rate.

The National Pig Association said farmers were losing more than £21 on every pig they sold, while the industry on a whole was losing £3.6m a week.

It said farmers were subsiding the profits of processors and retailers and that the margin needed to be distributed more fairly through the supply chain.

“We are an industry in crisis,” NFU Scotland said at the time. “We want retailers to stand by local pig farmers and pay them a price that properly recognises the costs they face.”

Twelve months later, the BPEX says the picture looks brighter for some producers, thanks to improved pig prices across Europe and a decline in feed costs.

“Latest figures suggest the average pig is losing £11,” says Mick Sloyan, BPEX director. “It’s still bad, but it’s better than last year. The top third of producers will be managing to break even at that rate.” 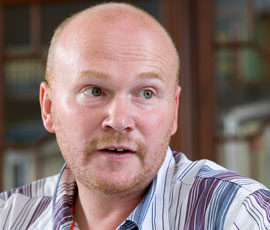 Andrew Freemantle, who farms 300 sows on his 28ha farm near Exeter, Devon, says things have changed for the better, but any improvement is not a result of any changes in the supply chain.

“The lower feed price makes a big difference on most units,” he says. “We’ve also been helped by the weak Sterling and the fact winter hasn’t been as cold or as long as it could have been.

“The industry is definitely more positive, but that isn’t because the supply chain or the retailers’ attitude has improved.

“They are still in it to buy things as cheaply as possible. It’s pretty vicious and lots of farms find it difficult to operate like that.”

In November last year, he and his brother Gregor decided to close the 600-sow enterprise they ran from their 784ha farm in Fort William south west Scotland. 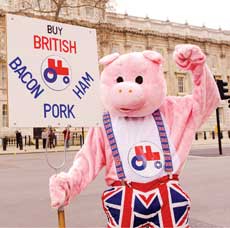 “We had been in the pig business since 1954, but it was financial suicide to stay there any longer,” he says.

“The pig prices killed us off. They had been so bad for so long that we couldn’t afford to invest and our buildings were too old.”

Without the right infrastructure to allow them to become incredibly efficient producers, Mr Christie and his brother had no choice but to close the herd.

While they would like to reinvest in pig production at some point, he says the pig price and the supply chain has to see huge improvements.

“Unless you are really a top operator you can’t operate in the market at the moment. There’s no room for anyone that isn’t absolutely technically excellent.

“We would need a significant rise in prices before we would reinvest,” he adds.

“A sustainable price has to include an allowance for reinvestment and proper payment for family labour. You could add another 30p/kg to the price and it wouldn’t be enough.”

While the situation is undeniably still tough for many, the BPEX says there is hope for a greater improvement in the UK pig price over the coming months.

“The biggest factor is the UK price in relation to the European pig price,” says Mr Sloyan.

“Just before Christmas, the UK pig price was 20p/kg higher than the rest of Europe, which puts huge pressure on our market.

“But figures last week put that figure at 4p/kg, so the cost pressure from Europe isn’t a factor at the moment.

“There’s a good chance the industry will pick up some extra money from the Olympics too, particularly if we have a good summer and people get out their barbecues.”

Longer-term, the implementation of a Europe-wide ban on sow stalls, which comes into force in January 2013, also has the potential to help UK producers.

Following a ban on the use of sow stalls and tethers by the British Government in 1991, UK producers were forced to stop using them in 1999.

Now the ban is being put in place across the European Union, the BPEX says the European pig herd has shown signs of falling as farmers leave the industry rather than investing in their units to become compliant.

“We are already starting to see an impact of the regulation,” says Mr Sloyan. “The December census across the EU shows a 3.5% fall in breeding sows over the past 12 months.

“That will have an impact on availability. As we get closer to the sow stall ban, we will see more people go out of business or give up.

“That prospect gives some hope for pig farmers to get their margins back.”

Mr Christie agrees the sow ban offers a glimmer of hope for producers like him, but any benefits it could offer to UK farmers depends on how the rules are enforced.

“When the ban comes in the UK should be stronger because we have had it since 1999 – we are used to operating and we have learnt the stills of keeping pigs without stalls.

“The big issue is whether the EU enforces it. If that enforcement requires a drop in EU pork production, so be it. European producers have had plenty of time to adjust.”

Mr Christie says the next big challenge for the UK industry will be catching up with the investments in infrastructure that European producers have made.

“Europe has charged ahead and have become very efficient. We have the knowledge to produce excellent pigs, but we need to have a sustainable strategy to invest in appropriate infrastructure.

“We need a collaborative strategy to ensure long-term growth of the industry. That will involve government, retailers, farmers and processors.”

Mr Freemantle agrees an industry-wide strategy is vital. “Things may be better than 12 months ago, but that isn’t because we have decided on a sensible way forward with all parts of the supply chain,” he says. “It’s because of simple supply and demand.

“Nothing has really changed on the retail side of things. What might be a solution is the opening up of markets in China, which will offer us an alternative market to the big four retailers here in the UK.”

Andrew Opie, British Retail Consortium chief executive, says British retailers are as supportive as they have ever been for the country’s pig industry.

“The picture hasn’t changed a great deal from where we were 12 months ago,” he says. “A lot of investment has continued, but it’s a tough market.

“Money is tight with consumers so it’s important the price is right, but there has been lots of promotion of UK production and we think that’s really helped sales.

“But we’re confident of the future of the UK industry. Retailers’ support is still there.”

Is the pig industry better placed?

• EU wide stall ban will even out welfare standards

Do you have more confidence in the UK pig industry? Have your say on our forums.