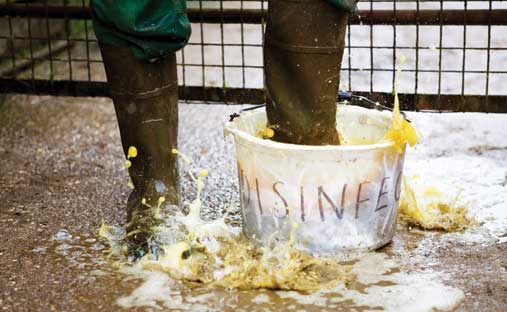 Continued use of antimicrobials could be masking underlying problems on British pig units – that was the message delivered by Mart Smolders from Schippers UK at BPEX’s Two Tonne Sow conference.

Addressing pig producers at the Royal Agriculture College in Cirencester, he said producers in The Netherlands had already cut antimicrobial use by 30% and were required by the government to reduce use by 50% by 2013.

“If pig producers are using antimicrobials, they don’t see all the areas where they can do better on farm. The solution to good health management is not found in a bottle,” he said.

“We have started using a new figure called ‘daily dose’ and it means all medicines are comparable based on their active substance and the advised active period. Farmers have to put this into a computer program with the vet, and then the unit’s daily dose figure is produced.”

And drawing on daily dose data from Dutch pig units, he said higher use of antimicrobials didn’t result in better performance; in fact farms with greater use had the worst performance out of the units recorded due to problems with internal and external farm biosecurity.

So how can producers improve health management and reduce antimicrobial use?

• Reduce the spread of disease around the farm; introduce boot-dipping stations between different houses on the farm

• Try not to mix piglet groups too much

• Ensure staff wash their hands regularly, particularly when working in the farrowing unit

• Make sure the pigs’ drinking water is clean

• Communicate any changes and protocols with all staff

“Some 70-80% of Dutch pig farmers are using this knowledge on farm to have better health management, and we have seen tremendous results with no use of antimicrobials,” added Mr Smolders.

For a full report from BPEX’s Two Tonne Sow conference see 30 March Farmers Weekly. Highlights include information on the next generation of pig feed, how to boost weaner performance and the importance of water intakes.