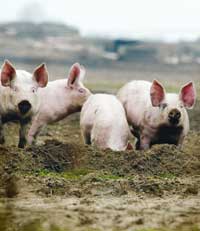 Corinne and Roger Eves, who keep 350 sows at Abbots Farm, near Braintree, Essex, say producers are being squeezed on both sides.

“We are piggy in the middle, with feed suppliers on one hand, justifiably able to pass on their increased costs, and buyers on the other, happily purchasing cheaper imported meat without giving a thought to our domestic industry,” said Mrs Eves. “We are losing money hand over fist – everyone else is passing on their costs, so why can’t we?”

The family, now in their fourth generation of pig breeding, produce gilts for PIC, to sell on to outdoor breeding units. “But people are not buying breeding gilts because finished pigs are losing so much money.”

Sales of gilts were down by 30% in December and 36% in January, compared with the previous year. “That means more of our gilts have to go for bacon, at a heavily reduced price – this week our contract price was 124-128p/kg, with average cull sow prices at just 52p/kg.

“We are losing an enormous amount of money, which can’t go on for much longer. We need 150-155p/kg, and we need it now if we are to stay in production.” Although BPEX had proposed a three-point plan to resolve the pig crisis, Mrs Eves was concerned it would not be enough to save the industry.

“I don’t feel that the consumer is aware of what’s going on. Three years ago, when prices were dire, lots of people ceased production, leaving only the hardcore of efficient producers left. When a farming business goes under it takes everything with it – we’ve been here for 37 years and we don’t want to lose everything we’ve worked for.

“Pig producers are suffering badly, and it would be a disaster if we lost our industry – pork prices would definitely rise. We haven’t been able to reinvest from profits for 20 years, but demand for quality British fresh pork is growing. With the country only 50% self-sufficient, surely it is time meat buyers recognise the need to pay the cost of production for all good-quality British products.”

Pig farmers reeling in the face of wheat prices that have doubled in the past six months are being offered detailed training on risk management.

ODA is organising three-day training courses across the country. The cost of a three-day course is £1,000, but ODA has secured grant funding of up to 50% of this fee depending on the region where the course is held.

• The National Pig Association is hoping thousands of pig producers will join its “Pigs Are Still Worth It” rally outside 10 Downing Street at 11am on 3 March. To find out more visit www.pigsareworthit.com

One of Ireland’s biggest pig farmers is winding down his 2300-sow herd due to unsustainable losses.

According to the Irish Independent, Rory O’Brien, who ranks in the top-five largest pig farmers in the country, blamed plummeting returns for closing the family business at Killicane, County Cork. “The most efficient pig farmers in this country have costs of production of 165-170c/kg (141-145p/kg), but are only paid 135-136c/kg (115-116p/kg),” he said. “You couldn’t sustain those level of losses. We took a look at it and decided there was no point in continuing.”

He insisted that processors and retailers, not just feed costs, were to blame for the current pig industry crisis. “There is no commitment to Irish pigmeat,” he said.

“The factories, secondary processors and shopkeepers have zero respect for Irish farmers. The farmer’s share is down to 17% of the shelf price – something has gone wrong somewhere.”

He warned that unless prices rise sharply, there would be no Irish pig industry within 12 months, with some farmers struggling to feed their pigs because they had no money. “It’s a race to the end and farmers are the victims.”