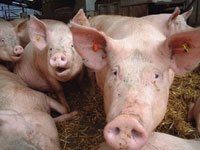 Pig producers plan to stage another rally in Westminster in early March to lobby MPs for a fairer supply chain because things are not moving fast enough, said National Pig Association Stewart Houston.

A similar event was held was in March 2008, when producer losses were last running at more than £20/pig, as they are now.

The “Pigs Are Still Worth It” campaign will be handing out hog-roast buns to consumers to thank them for their support for British pork. Large Red Tractor banners will be used to highlight British pork’s credentials over those of its imported competition.