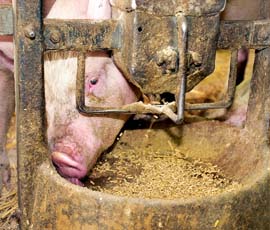 The solution to mitigating feed price increases lies with the whole of the supply chain working together.

Speaking at the JSR conference in York last week, pig producer and Agriculture and Horticulture Development Board chair John Godfrey said this year had been the “most difficult” in his 40 year career in farming.

He said: “We – like the vast majority of people – are losing money because of the high feed costs.”

Mr Godfrey, who farms 6,500 sows in partnership with his brother, explained that recent feed price hikes had bumped his production costs up to 15p/kg against budgets set in March – the equivalent of £2.5m a year.

“It is really frustrating to work so hard to control all the factors and then be blown off course by events in the rest of the world.”

But he told delegates that simply increasing prices was not the answer and would only put added pressure on an already-stretched processing industry.

“Simply increasing prices would put greater pressure on our processing sector where margins are already tight.

“The solution only rests with the whole supply chain working together to deliver a return that covers the cost of production.”

Mr Godfrey said if the sector failed to do this it ran a “real risk” of contracting and losing both the UK consumer and the UK supply chain.

He said a critical part of improving profitability was exports, in particular looking to countries such as China to use the whole carcass and maximise value of the fifth quarter.

Mr Godfrey said: “The pig market is huge – the biggest in the world – and it could easily be worth £50m a year for pig offal alone.”

More from the JSR Genetics conference

Fine balance between welfare and profitability