We catch up with the Pig Farmers of the Year, Rob and Helen Mutimer, to find out what they’ve been doing since the Awards ceremony in October.

See also: Find out what made Rob and Helen our winners

I was absolutely thrilled – a mixture of elation and relief. We had to cull our entire herd three years ago and our stockmen stuck with us through the whole grim task of managing the finishing herd through swine dysentery.

They came with us to the ceremony in London (apologies to poor Hristo who had to stay in Norfolk to feed the pigs) and the award was very much a celebration and tribute to their loyalty and hard work. 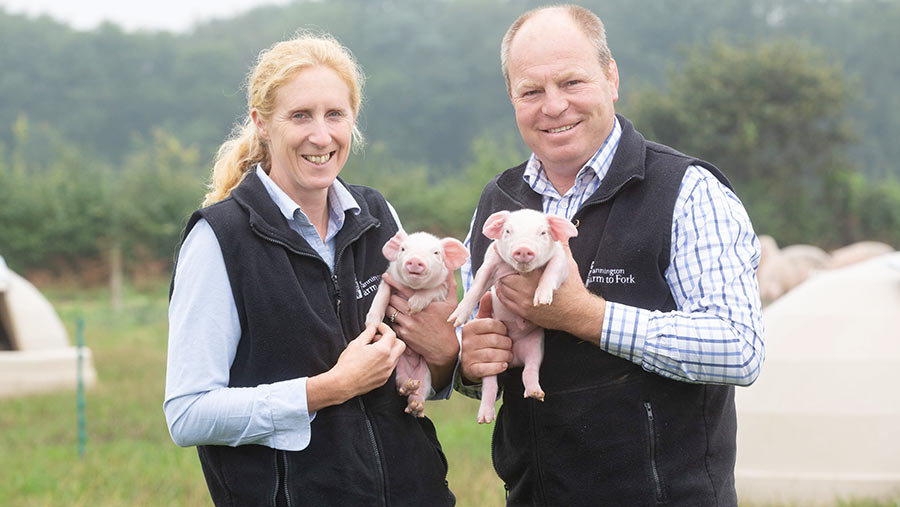 What’s your one tip for anyone entering to improve their chances of success?

It’s worth sending your application to a friend of family member whose opinion you trust to read it once you’ve drafted it. I showed ours to my in-laws, Janet and Tom – they’re inspiring people who built our business from scratch.

Janet took one look and said it didn’t represent our farm or our achievements and that I should rewrite it with the passion that we demonstrate in our work with the pigs and in our commitment to continually improve.

It’s not in many farmers’ nature to “sell” themselves, but you have to try to put modesty aside if you’re entering awards.

How can agriculture improve its image with the general public?

We need to reconnect with the public, starting with schoolchildren.

We live in a rural area, but even at our local school there seems to be a lack of understanding of basic farming practices, so it does not surprise me that people living in urban areas have no idea how important farming is to the long-term preservation of our environment and the socioeconomic survival of rural communities.

A system where farm visits were compulsory for schoolchildren would start the process.

How different will farming be in 10 years’ time?

I think electronic innovation will be fully functional in many areas.

We use electronic ear tags and I hope the system would be much more seamless and allow the whole farm – from breeding to finishing – to be connected, with electronic scanning of which bag of semen is used for each sow, vaccines and antibiotics use recorded directly into the computer, plus all abattoir data linked to individual pigs and traceable to the sow.

Where have you put your Awards plaque? It’s over the counter at one of our farm butchery shops.

Finish the sentence. Agriculture is… Addictive.

If you were Defra secretary for the day and had the power to make one decision, what would it be? Rob would outlaw a no-deal Brexit, which would decimate British agriculture.

The Farmers Weekly 2019 Pig Farmer of the Year Award is sponsored by NSF. Enter or nominate now at awards.fwi.co.uk