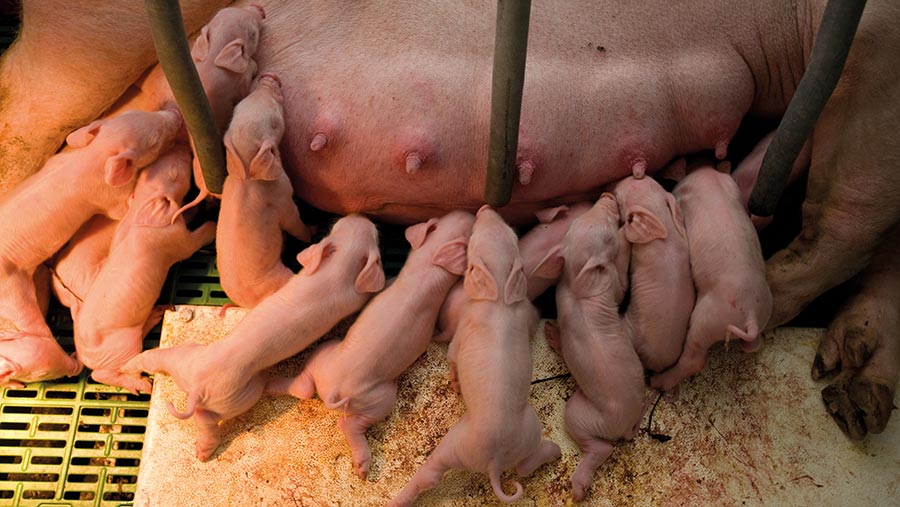 The economic ups and downs of the “pig cycle” are accepted to a degree as a part of pig farming, with margins fluctuating between positive and negative during the past two decades.

In 2002, cost of production was 105.5p/kg, while in the second half of this year it soared to a record 180p/kg, illustrating two very difficult loss-making periods

At the end of 1997, the number of sows stood at 802,000. However, the UK government’s sow stall ban in 1999 left many producers unable to fund new accommodation.

Meanwhile, retailers failed to honour commitments not to source cheaper EU pork produced to lower welfare standards. It triggered a long-term contraction of the industry.

See also: What is lean management and how can it improve pig farming?

The high price of pig feed is the biggest underlying problem currently, says AHDB senior analyst Bethan Wilkins, with feed having always accounted for more than half of the total cost of pig production.

In 2013, during the last major feed price crisis, feed contribution rose to 66% of total costs. The first half of this year saw another peak, at 67%.

Disease outbreaks contributed further to the contraction of the industry.

There was classical swine fever in 2000, foot-and-mouth disease in 2001, and post-weaning multisystemic wasting syndrome, which first emerged in 1999 in the UK and caused high piglet losses until the first vaccine was launched in 2007.

Since then, health planning and vaccination programmes have become a key part of herd management and biosecurity has improved dramatically.

These management factors have also helped the industry make significant reductions in antibiotics usage over the past five years.

Developments in genetics have contributed to increased efficiency, too.

UK breeding companies have embraced genetics from countries such as Denmark and the Netherlands, along with major advancements in nutrition and improved health.

These improvements have also helped reduce the environmental footprint of UK pig production.

However, there is now a challenge to reduce gilt losses in breeding herds and improve sow retention, so more pigs reach their most productive age between parities three and five, says Mr Hall

On the domestic market, lifestyle change has been a big influence – in particular, the need to serve food quickly, while maintaining high quality, has led processors to develop new cuts.

Opening the Chinese market for exports of UK pork in 2012 drove additional demand and higher prices until the ban on pork exports to China came into effect in 2020.

This, combined with soaring feed prices, labour shortages and reduced abattoir throughputs means the current situation is one of the most difficult UK pig producers have ever faced.