Steve Hart has built up a large-scale, high-welfare farrow-to-finish business from scratch. He now has 13,000 outdoor sows and 75,000 growing pigs, supplying highly demanding end customers including Waitrose, McDonald’s and Chipotle.

Behind his success lies a clear vision for his business, ongoing innovation, investment in team development – and a lot of hard graft. 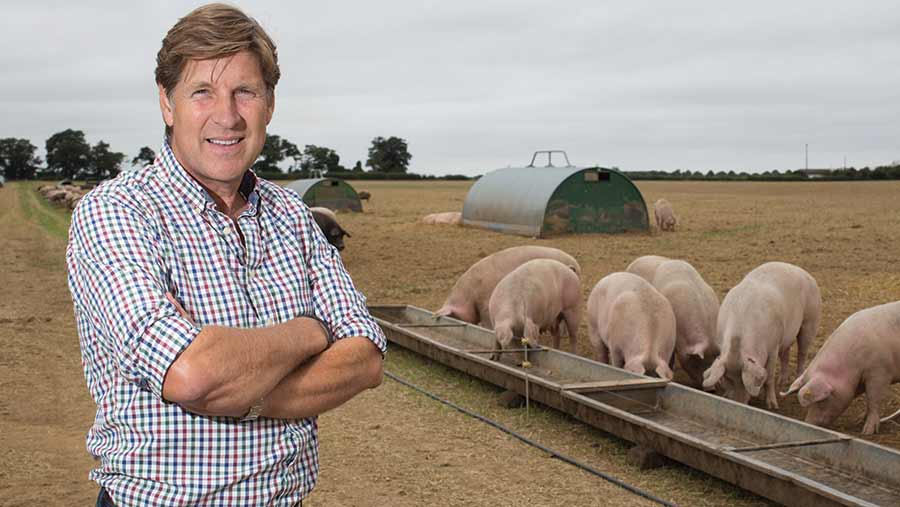 Steve runs 10 breeding units for his own pigs, plus another five where he is contract breeding. They operate on a three-week batch-farrowing basis, using 100% artificial insemination.

A close link with pig genetics firm PIC led to Steve breeding his own replacement sows. “We feel this gives us a robust animal suited to our system, as well as security of supply,” he explains.

Two years ago he switched to single-parity herds to reduce aggression and help control disease. He has also introduced feeding to appetite for his lactating sows through individual ad-lib feeders, combined with clean water nipple drinkers.

Following these changes, output has increased from 23.5 to 25 pigs weaned a sow a year and average weaning weights are up by 0.7kg.

His pre-weaning mortality rate is 10-11% and he is in the process of rolling out bigger farrowing huts to reduce this even further.

About 50,000 of Steve’s pigs are finished outdoors, on 15 free-range sites. They are achieving an impressive feed conversion ratio of 2.4-2.7, with an average daily weight gain of 750g.

Steve has managed to maintain healthy herds while eliminating the use of antibiotics in feed.

Water is acidified and, when required, antibiotics are added via highly accurate dosage meters normally used in the poultry industry.

To keep tight control of biosecurity he runs his own fleet of lorries, hauling all his pig food, weaners and finished pigs.

Steve attributes much of his success to the strength of his 90-strong team. He puts a lot of thought and effort into recruitment, people development and the way his team operates.

It really is a perfect example of a team being stronger than the sum of its parts,” he says.

Most of his pig units are run by a team of two. “One of them is in charge, but we make them both feel that they are a manager,” Steve says.

Additional staff work as floaters to help out at individual units at busy times, such as on weaning day.

Staff work to a set of standard operating procedures that Steve has developed jointly with BQP. Managers are given clear targets, focused on improving the quality of weaned piglets and reducing time to slaughter.

In future, Steve is looking to further expand his business, perhaps by acquiring another large pig producer.

He also has ambitions to build his own brand for processed products such as sausages.

“Harbro has worked with pig farmers for 40 years and we have seen first-hand their dedication and commitment to improve their businesses. All finalists have been recognised for their progression and innovation and we congratulate them”